Population Characteristics of the European Lobster, Homarus gammarus in the Adriatic Sea: Implications for Sustainable Fisheries Management
Next Article in Special Issue

Rivers and streams are heterogenous ecosystems that host a great number of vascular plant communities. The territory of Slovenia is highly diverse regarding geomorphologic, geologic, climatic, and edaphic conditions. We presumed that environmental variability will also affect the distribution of hygrophilous vascular plants in running waters and consequently the structure of plant communities they form. We analyzed macrophyte, spatial, and environmental parameters in 906 stretches of the watercourses occurring in the Dinaric, Pannonian, and Po lowland hydro-ecoregions. We determined 87 vascular plant taxa. The most abundant were Myriophyllum spicatum, Phalaris arundinacea, and Potamogeton nodosus. Submerged macrophytes presented about one third of total species abundance, while amphiphytes were somewhat less abundant. Canonical correspondence analysis (CCA) revealed that distance from the source explained 15.1% of the growth form type variability, and current velocity and latitude explained 4.1% each. With the assessed parameters, we explained 31.6% of the variability. When CCA was run with taxa, only 20.9% of their variability was explained with statistically significant parameters. We distinguished 25 different plant associations belonging to five classes and nine alliances. The majority of defined plant communities were distributed in different watercourses belonging to different hydro-ecoregions. Only seven communities had a narrower distribution range, three of them on karst poljes. Among them, the new association Mentho aquaticae-Oenanthetum fistulosae from the river Mali Obrh on the Loško polje was described in this contribution. View Full-Text
Keywords: macrophytes; growth forms; plant communities; distribution; rivers; streams; Slovenia macrophytes; growth forms; plant communities; distribution; rivers; streams; Slovenia
►▼ Show Figures 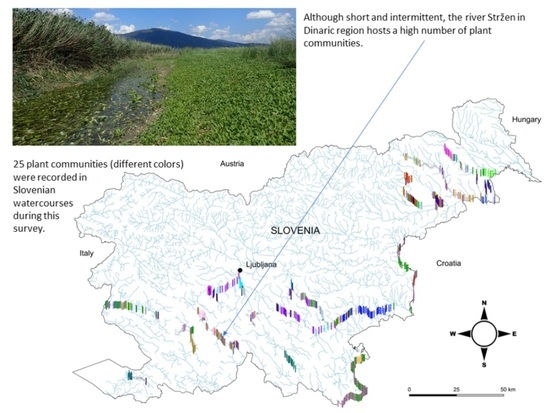