Long-Term Analysis of Precipitation in Slovakia

Groundwater contamination due to saltwater intrusion (SWI) has an extreme effect on freshwater quality. Analytical and numerical models could be used to investigate SWI. This study aims to develop an analytical solution to investigate SWI into coastal aquifers which was applied to a real case study at the Middle Nile Delta aquifer (MNDA). The study presented a new formula to predict the difference in depth of freshwater to seawater interface due to a change in boundary conditions. A Computer Program for Simulation of Three-Dimensional Variable-Density Ground-Water Flow and Transport (SEAWAT) is used for groundwater flow simulation and SWI and the results compared with the developed analytical solution. Four scenarios are considered in the study, including; the sea-level rise (SLR), reduction in recharge, over abstraction, and combination after 50 years (2070). The analytical solution gave good results compared to the numerical one where Equiline 1 intruded to 103 and 101.66 km respectively at the base case. The results also gave a good agreement between numerical and the analytical solution for SLR due to climate changes by 52.80 cm where the Equiline 1 reached to 105 and 103.45 km. However, the reduction in aquifer recharge by 18.50% resulted in an intrusion for the Equiline-1 to 111 and 108.25 km from the shoreline. Over pumping due to the increase in population by 89% has increased the SWI to reach 121,110.31 km, while it reached 131 and 111.32 km at a combination of the three scenarios, which represents the highest threatening scenario. Also, the difference between the two solutions reached 1.30%, 1.48%, 2.48%, 8.84%, and 15.02%, respectively for the base case and four scenarios. For the current case study, the analytical model gave good results compared to the numerical one, so that the analytical solution is recommended for similar studies, which could save the time and capabilities of computer required for the numerical solutions. View Full-Text
Keywords: saltwater intrusion; analytical solution; numerical solution; climate change; Nile Delta aquifer saltwater intrusion; analytical solution; numerical solution; climate change; Nile Delta aquifer
►▼ Show Figures 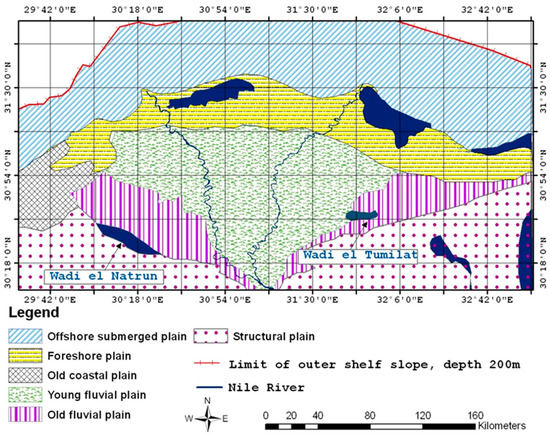