Benthic Metabolism in Fluvial Sediments with Larvae of Lampetra sp.

Lampreys spend their larval stage within fine sand fluvial sediments, where they burrow and act as filter feeders. Lamprey larvae (ammocoetes) can significantly affect benthic-pelagic coupling and nutrient cycling in rivers, due to high densities. However, their bioturbation, feeding and excretion activities are still poorly explored. These aspects were investigated by means of laboratory incubations of intact sediments added with ammocoetes and of animals alone. Oxygen respiration, nutrient fluxes and excretion rates were determined. Individual ammocoete incubations suggested that biomass-specific oxygen consumption and ammonium, reactive phosphorus and silica excretion were size-dependent, and greater in small compared to large individuals. The comparison of ammocoetes metabolic rates with rates measured in intact sediments revealed that ammocoetes activity decreases significantly when they are burrowed in sediments. Furthermore, results suggest that a major fraction of ammonium excreted by ammocoetes was assimilated by benthic microbes or microalgae to overcome in situ N-limitation. Alternatively, part of the excreted ammonium was oxidized and denitrified within sediments, as nitrate uptake rather increased along with ammocoetes density. Ammocoetes excreted reactive phosphorus and silica but such production was not apparent in bioturbated sediments, likely due to microbial or microalgal uptake or to immobilization in sediments. View Full-Text
Keywords: ammocoetes; sediments; bioturbation; metabolism; fluxes; engineering species ammocoetes; sediments; bioturbation; metabolism; fluxes; engineering species
►▼ Show Figures 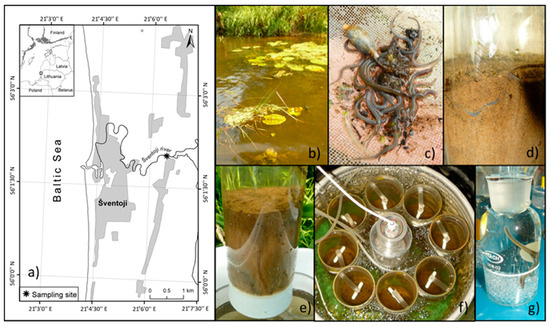