2. Water Flow in a PFC Pavement

3. Modeling of Water Flow in a PFC Pavement and Analysis Parameters

In this study, a finite element program, SV Flux 2D [19], was used to model the transient unsaturated/saturated seepage in the PFC pavement. Assuming that water has a constant volume and is incompressible, the governing equation of two-dimensional water flow is expressed in Equation (1): where kx and ky are the hydraulic conductivities in the horizontal and vertical directions, respectively, h is the total water head, kvd is the vapor conductivity, uw is the pore water pressure, γw is the unit weight of water, is the coefficient of water storage obtained from the derivative of the soil–water characteristic curve, and t is the time.
The soil–water characteristic curve (SWCC) represents the nonlinear relationship between the volumetric water content and the suction in the soil. Van Genuchten’s equation [20,21] was used in this study to model the SWCC, as shown in Equation (2): where θ is the volumetric water content, θs is the saturated volumetric water content, θr is the residual volumetric water content, Ψ is the soil suction, and a, n, and m are the material (fitting) parameters.

In a PFC pavement, a majority of the water flows along the steepest slope, which is the resultant SR of the cross slope Sx and the longitudinal slope Sy, as presented in Figure 2. The flow of water for a PFC pavement in a three-dimensional direction can be represented by the flow of water for one with a two-dimensional direction having an equivalent water flow path consisting of the length (LR) and slope (SR). These variables can be calculated from the width W, length L, cross slope Sx, and longitudinal slope Sy of the PFC pavement based on Equation (3) and Equation (4) [10]:

Based on the conventional dimension of pavement in the AASHTO manual, “Policy on Geometric Design of Highways and Streets” [22], the equivalent water flow path including the length LR and slope SR of the PFC pavement was determined according to Equation (3) and Equation (4). The equivalent length LR, ranging from 10 to 30 m, and the equivalent slope SR, ranging from 0.5% to 8%, as listed in Table 1, were selected for observation since the other values are exaggerated for a PFC pavement. For each geometric model, a rainfall intensity of 10 mm/h was simulated first, and this value was increased in steps of 10 mm/h up to a maximum value of 120 mm/h. For each iteration, the time taken for water flow over the PFC pavement surface (tp) was evaluated.

The horizontal and vertical permeabilities of the porous asphalt used in the numerical analysis were determined from the laboratory experiment. Specimens with dimensions of 0.3 × 0.3 × 0.05 m and porosity of 19.6% were tested. The horizontal permeability was evaluated according to a procedure developed by Ahn et al. [23], and the vertical permeability was examined using a constant head procedure presented in Ahn et al. [24]. A summary of the two test procedures is presented in Figure 3 and Figure 4.
From the experimental results, the horizontal and vertical permeabilities were 11.1 and 9.2 mm/s, respectively. The horizontal permeability of the porous asphalt was found to be slightly higher than the vertical permeability. In this study, the permeability of the PFC pavement was assumed to be isotropic and equal to 10 mm/s.
The SWCC parameters for a pervious concrete given in Lim and Kim [25] were used for those of the PFC pavement in this study. They obtained the SWCC parameters through the equation of Fredlund and Xing [26] using Fredlund’s device [27]. These parameters were substituted in Equation (2) in this study. The SWCC parameters and curve are presented in Table 2 and Figure 5, respectively.
According to previous studies, PFC pavements absorb the surrounding air to reduce the noise from moving vehicle tires [4]. In the case of no rainfall, PFC pavement has a suction force and a negative value for the pore water pressure [28]. Therefore, in this study, the initial pore water pressure was set to a negative value within the range of the residual zone.
In the numerical analysis, it was noted that the pore water pressure values within the range of the residual zone had no significant effect on the allowable rainfall intensity and time taken for water flow over the PFC pavement surface. Based on Figure 5, −200 kPa was selected as the initial value of the pore water pressure in the PFC pavement to indicate that the pavement was completely dry before rainfall. Data for inflow and outflow volumes and degree of saturation with respect to time were continually recorded during the analysis.

4.1. Time Taken for Water Flow over the PFC Pavement Surface

The relationships between the time taken for water flow over the PFC pavement surface and the rainfall intensity according to the different geometric designs are depicted in Figure 6. Based on the results, it is observed that tp decreases with the increase in the length of LR. For instance, for I = 40 mm/h and SR = 8%, as LR increased by 20 m (from 10 to 30 m), tp decreased by 9 min (from 26 to 17 min). These results indicate that surface ponding occurred earlier for the PFC pavement that had a longer length LR.
In this study, it was also found that the slope had a significant effect on the time taken for water flow over the PFC pavement surface. The increase in SR results in a corresponding increase in tp, as reported by Tan et al. [9]. For example, for LR = 10 m and I = 40 mm/h, tp increases by 12 min (from 14 to 26 min) when SR increases by 7.5% (from 0.5% to 8%).
In Figure 6d, it is noticed that as LR = 30 m, different values of SR result in correspondingly similar values of tp. The finding highlights that the hydrologic characteristic of the PFC pavement is less sensitive to the slope SR when it has a longer length LR. Furthermore, it can be seen that the PFC pavements with different geometric designs have close results in the time taken for water flow over the PFC pavement surfaces at high rainfall intensities. It can be concluded that PFC pavements at high rainfall intensity have a similar hydrologic characteristic, regardless of the geometric design.

In this study, the allowable rainfall intensity Ia for the PFC pavement, which is the maximum rainfall intensity for which the water flow would remain only within the PFC pavement body, was estimated. In other words, this value of the rainfall intensity allows the head of water flow H inside the PFC pavement to be equal to its thickness T, regardless of the rainfall duration. The results are displayed in Table 4.
In Figure 7, the allowable rainfall intensities Ia according to the slope SR and length LR are presented. It can be seen that when SR increases, there is an upward trend in Ia. This observation is consistent with that of Tan et al. [9]. In addition, Ia decreases when LR increases, which supports the results reported by Ranieri [29]. This observation implies that a PFC pavement with a shorter LR and longer SR exhibits higher drainage capacity.
A PFC pavement with a shorter length LR is more sensitive to variations in the slope SR. For example, when the value of SR increases from 0.5% to 8%, for LR = 10 m, Ia significantly increases by 27.5 mm/h (an increase from 2.5 to 30 mm/h), but for LR = 15 m, I¬¬a increases by only 19 mm/h. However, for LR = 20 m, Ia slightly increases by 5 mm/h.

4.4. Effects of Thickness and Porosity

This work is supported by the Korea Agency for Infrastructure Technology Advancement (KAIA) grant funded by the Ministry of Land, Infrastructure and Transport (Grant 21CTAP-C152124-03).

The authors would like to thank the Ministry of Land, Infrastructure, and Transport of the Korean government for the grant from the Technology Advancement Research Program (Grant Number 21CTAP-C152124-03). 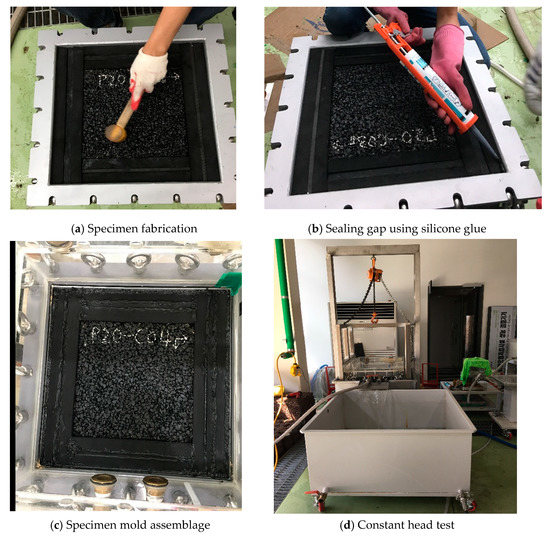 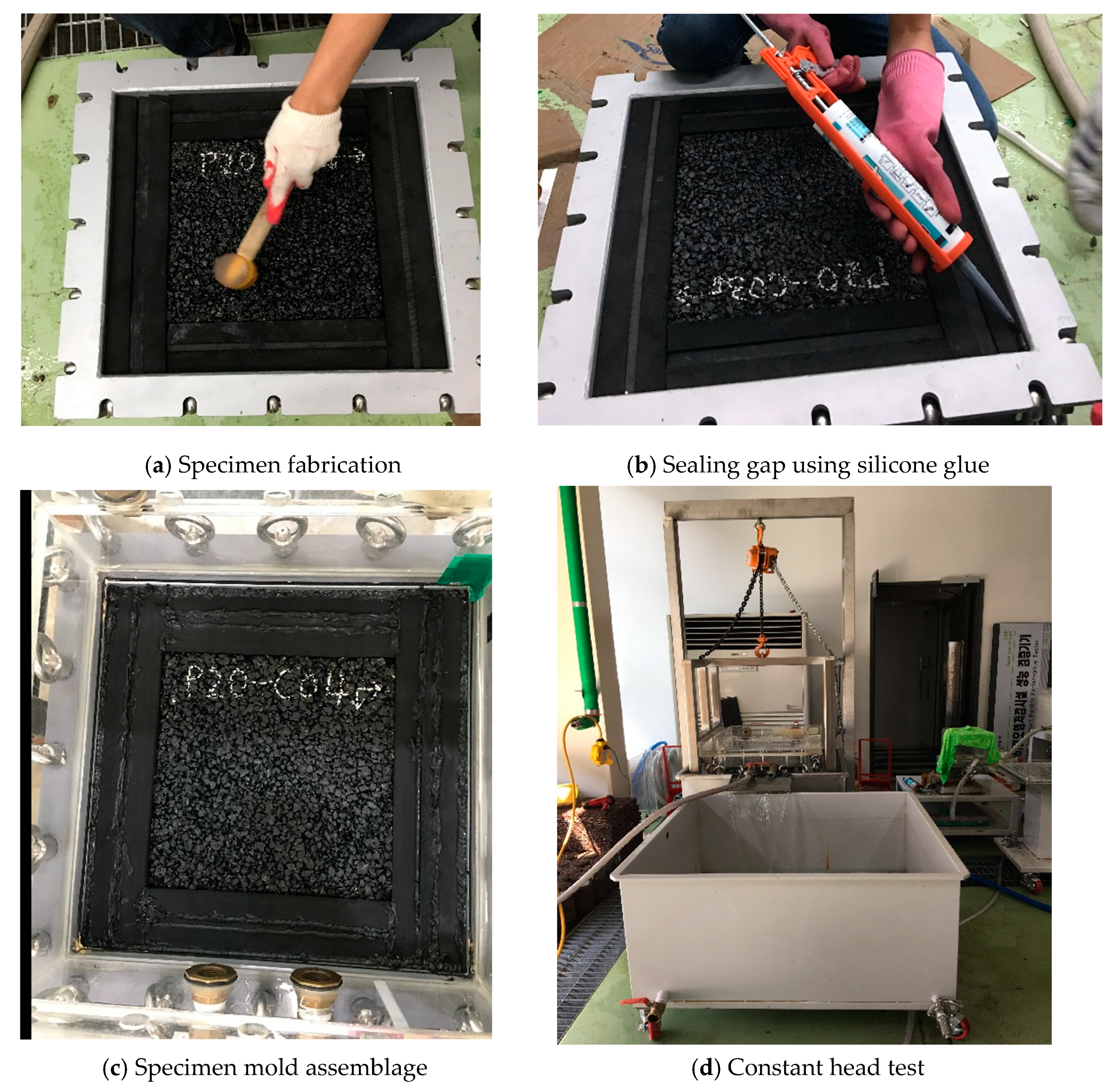 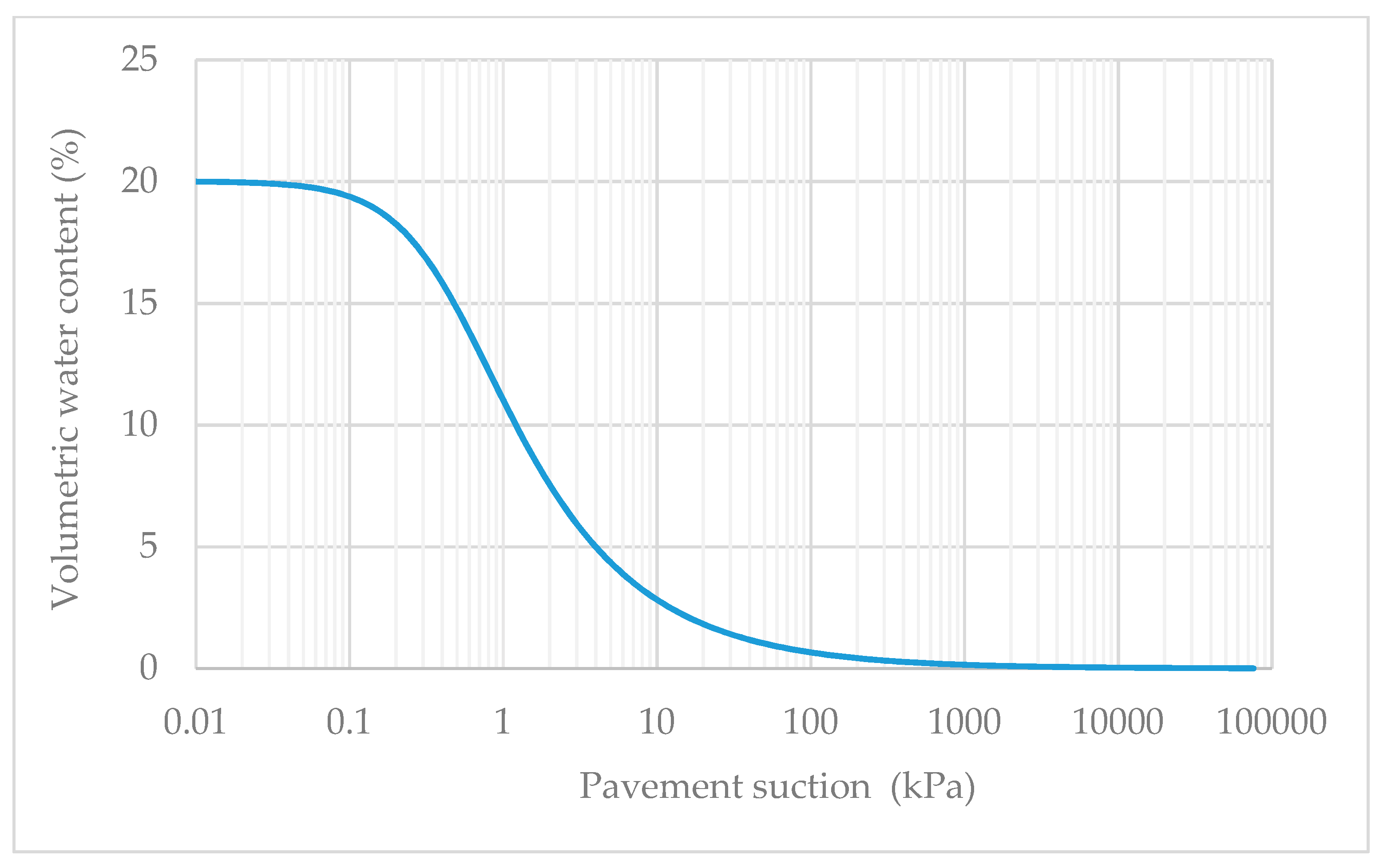 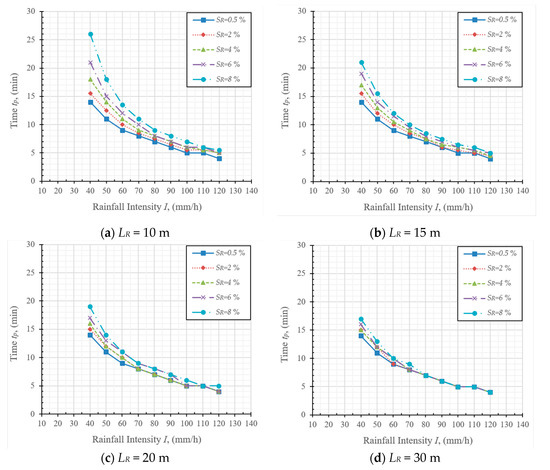 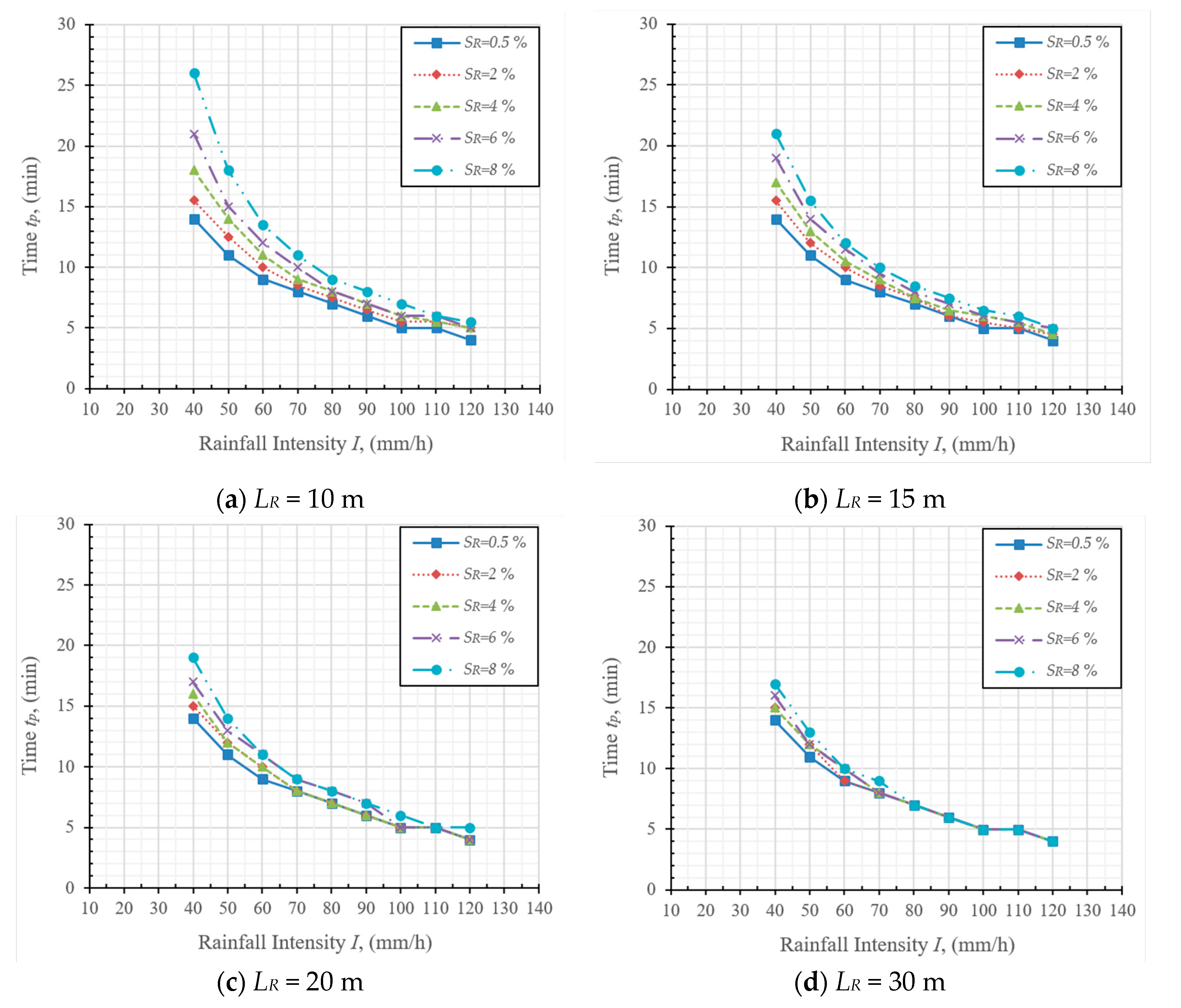 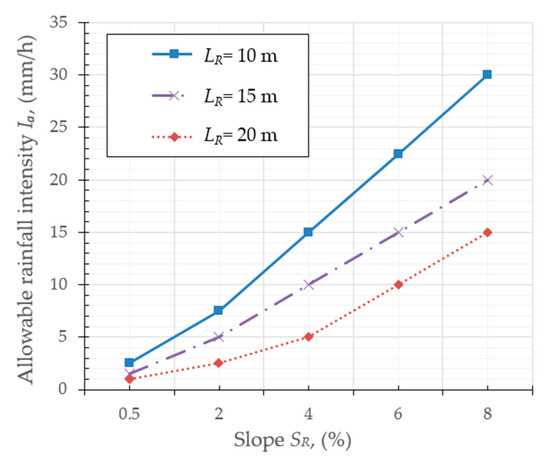 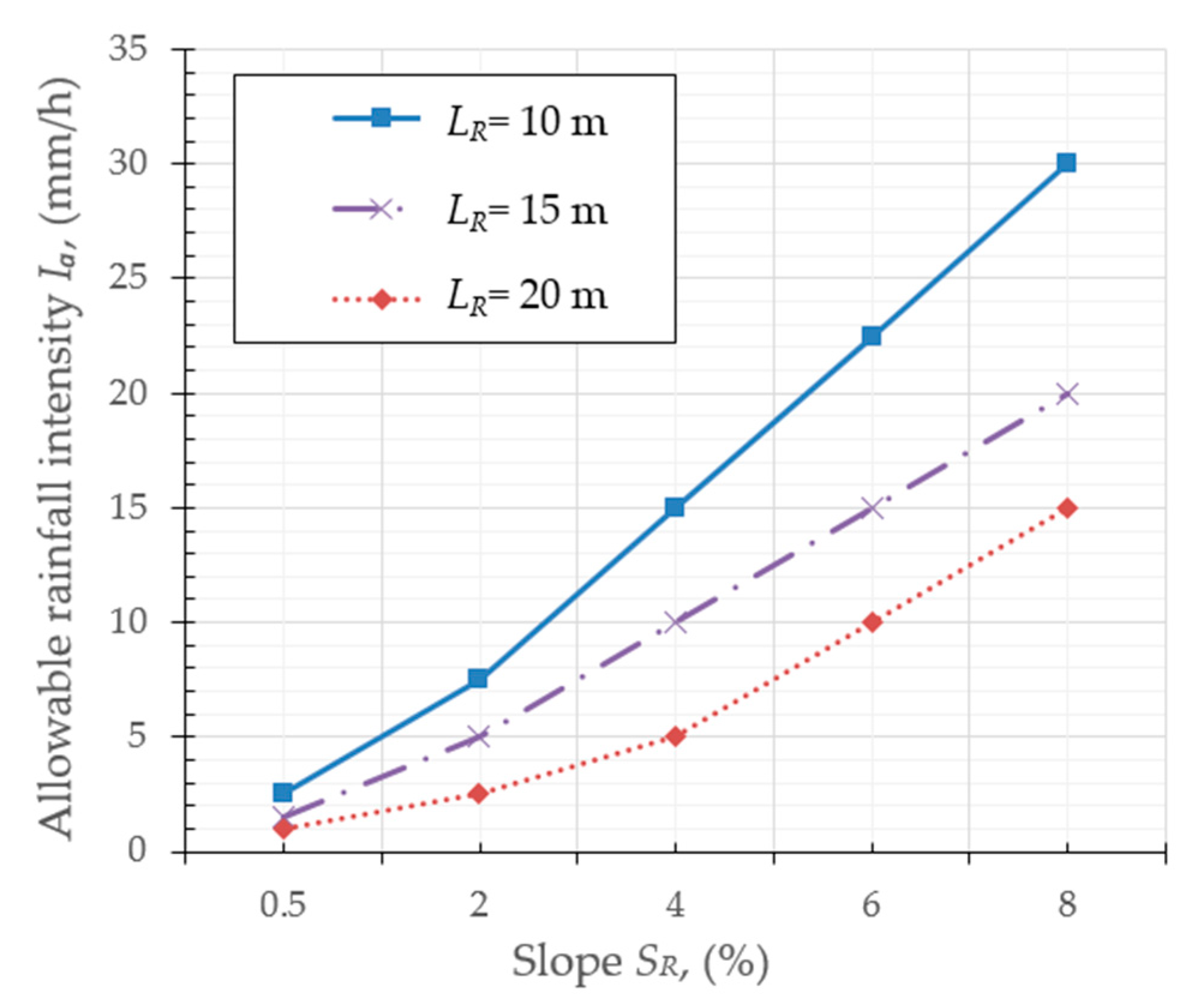 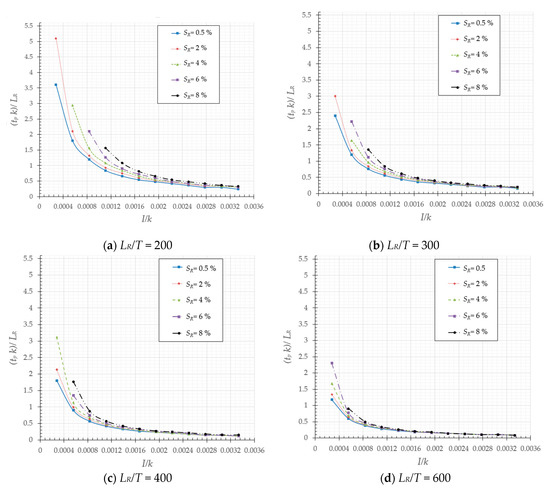 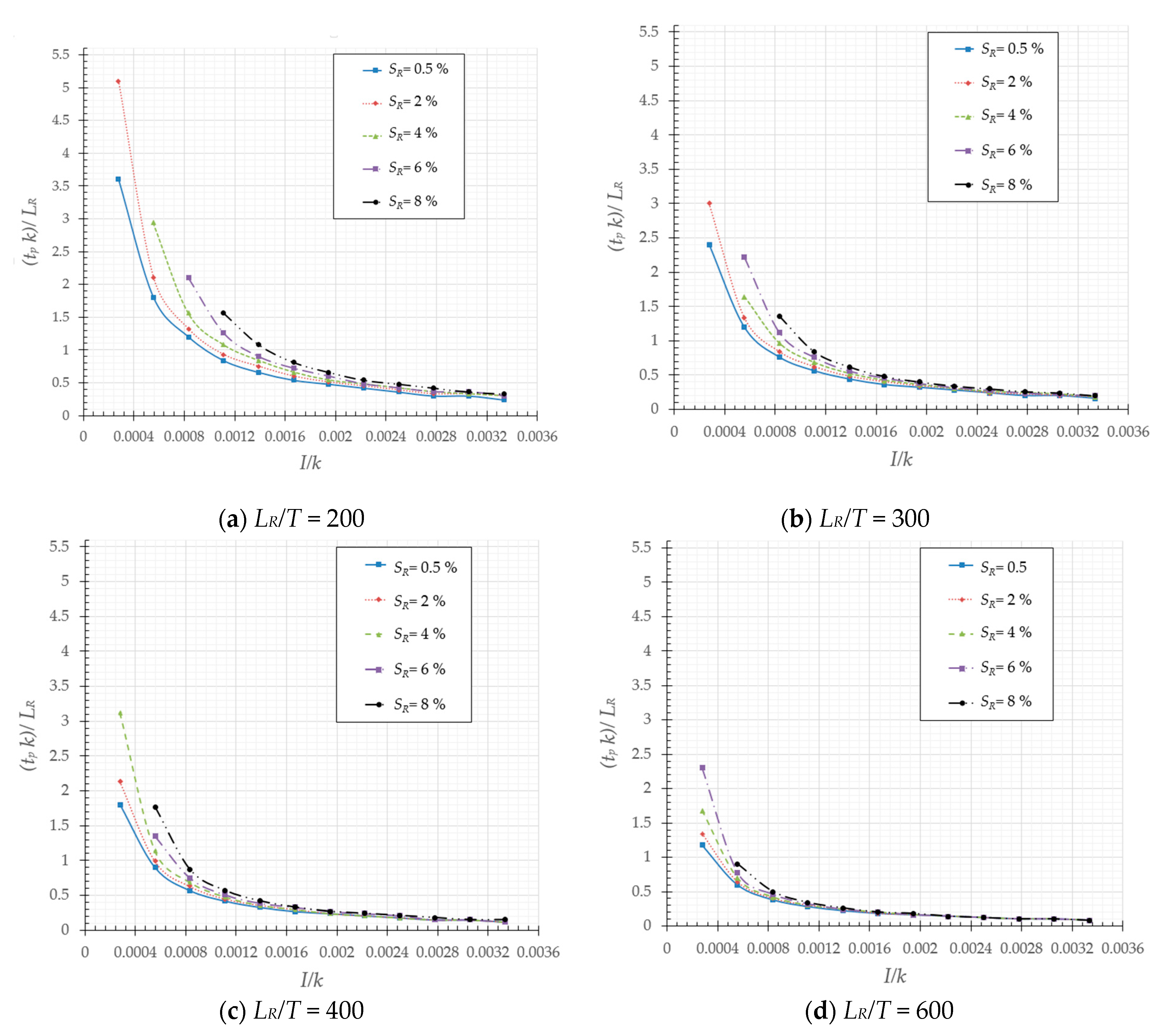