In the present study, the susceptibility to flash-floods and flooding was studied across the Izvorul Dorului River basin in Romania. In the first phase, three ensemble models were used to determine the susceptibility to flash-floods. These models were generated by a combination of three statistical bivariate methods, namely frequency ratio (FR), weights of evidence (WOE), and statistical index (SI), with fuzzy analytical hierarchy process (FAHP). The result obtained from the application of the FAHP-WOE model had the best performance highlighted by an Area Under Curve—Receiver Operating Characteristics Curve (AUC-ROC) value of 0.837 for the training sample and another of 0.79 for the validation sample. Furthermore, the results offered by FAHP-WOE were weighted on the river network level using the flow accumulation method, through which the valleys with a medium, high, and very high torrential susceptibility were identified. Based on these valleys’ locations, the susceptibility to floods was estimated. Thus, in the first stage, a buffer zone of 200 m was delimited around the identified valleys along which the floods could occur. Once the buffer zone was established, ten flood conditioning factors were used to determine the flood susceptibility through the analytical hierarchy process model. Approximately 25% of the total delimited area had a high and very high flood susceptibility. View Full-Text
Keywords: flooding; flash-floods; bivariate statistics; fuzzy multicriteria decision-making; small catchments; Romania flooding; flash-floods; bivariate statistics; fuzzy multicriteria decision-making; small catchments; Romania
►▼ Show Figures 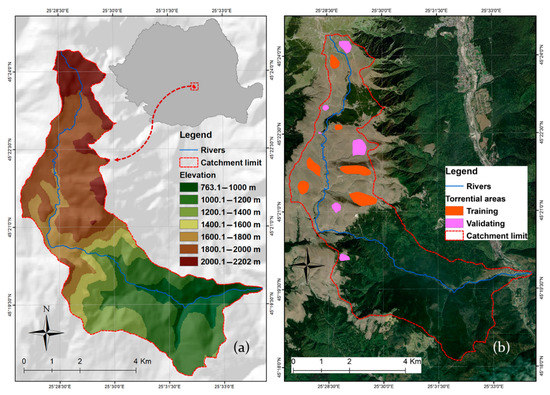