Groundwater of the Modder River Catchment of South Africa: A Sustainability Prediction
Previous Article in Journal

An Integrated Modeling System for the Evaluation of Water Resources in Coastal Agricultural Watersheds: Application in Almyros Basin, Thessaly, Greece

A combined hydrogeochemical and hydrodynamic characterization for the assessment of key aspects related to groundwater resources management was performed in a highly productive agricultural basin of the Thessaly region in central Greece. A complementary suite of tools and methods—including graphical processing, hydrogeochemical modeling, multivariate statistics and environmental isotopes—have been applied to a comprehensive dataset of physicochemical analyses and water level measurements. Results revealed that the initial hydrogeochemistry of groundwater was progressively impacted by secondary phenomena (e.g., ion exchange and redox reactions) which were clearly delineated into distinct zones according to data processing. The progressive evolution of groundwater was further verified by the variation of the saturation indices of critical minerals. In addition, the combined use of water level measurements delineated the major pathways of groundwater flow. Interestingly, the additional joint assessment of environmental isotopes revealed a new pathway from E–NE (which had never before been validated), thus highlighting the importance of the joint tools/methods application in complex scientific tasks. The application of multivariate statistics identified the dominant processes that control hydrogeochemistry and fit well with identified hydrodynamic mechanisms. These included (as dominant factor) the salinization impact due to the combined use of irrigation water return and evaporitic mineral leaching, as well as the impact of the geogenic calcareous substrate (mainly karstic calcareous formations and dolostones). Secondary factors, acting as processes (e.g., redox and ion exchange), were identified and found to be in line with initial assessment, thus validating the overall characterization. Finally, the outcomes may prove to be valuable in the progression toward sustainable groundwater resources management. The results have provided spatial and temporal information for significant parameters, sources, and processes—which, as a methodological approach, could be adopted in similar cases of other catchments. View Full-Text
Keywords: hydrochemistry; hydrodynamics; groundwater; environmental isotopes; Tirnavos basin hydrochemistry; hydrodynamics; groundwater; environmental isotopes; Tirnavos basin
►▼ Show Figures 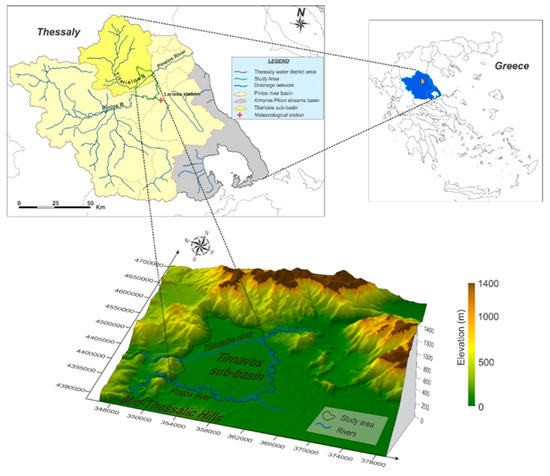