Geochemistry of Water and Sediment
Previous Article in Journal

In recent years, many studies have been performed to develop simple and accurate methods to design micro-irrigation systems. However, most of these studies are based on numerical solutions that require a high number of iterations and attempts, without ensuring to maximize water use efficiency and energy-saving. Recently, the IRRILAB software, which is based on an analytical approach to optimally design rectangular micro-irrigation units, has been developed, providing the solution corresponding to the maximum energy-saving condition, for any slope of the laterals and of the manifold. One IRRILAB limitation is that, according to its theoretical basis, the rectangular planform geometry and uniform slope of the laterals and of the manifold are required. On the contrary, IRRIPRO software, which is based on the traditional numerical solution, does not have the aforementioned limitations, but requires an important number of attempts, especially when common emitters are used. In this study, the results of a joint use of IRRILAB and IRRIPRO software applications are illustrated, towards the aim to verify the IRRILAB performance in a large number of micro-irrigation sectors belonging to a Sicilian apple farm, which is characterized by a high irregular topography, thus it is suitable for the purpose of this study. First, only five irrigation sectors, for the actual subdivisions of the farm, were considered, showing limited reasonable IRRILAB results. Dividing the farm into a higher number of sectors so as to provide a better uniformity in planform geometry and slope revealed that IRRILAB results improved in terms of emission uniformity and energy consumption, as verified by IRRIPRO applications. The energy-saving provided by IRRILAB (in one step) with respect to that by IRRIPRO (by attempts) resulted higher for common emitters (CEs) (−15% for five sectors and −9% for nine sectors) than for pressure compensating emitters (PCEs) (−7% for five sectors and −6% for nine sectors). In absolute terms, the energy is greater for five-sector subdivision than for nine-sector subdivision. For both software, the use of PCEs always required less energy than CEs, because of the higher range of pressure compensating of PCEs than CEs. However, PCEs are characterized by less durability and by a higher manufacturing variation coefficient, thus they should not be the first choice. In conclusion, IRRILAB software could be recommended because it is easy to use, making it possible to save energy, especially when sectors are almost rectangular and uniform in slopes. View Full-Text
Keywords: micro-irrigation systems; IRRILAB software; IRRIPRO software; common emitters; energy-saving micro-irrigation systems; IRRILAB software; IRRIPRO software; common emitters; energy-saving
►▼ Show Figures 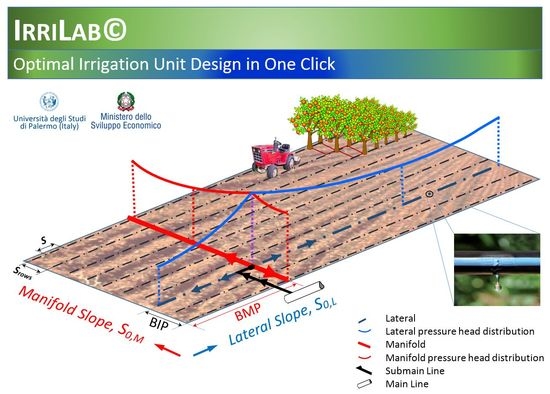