Modeling the Effect of Different Forest Types on Water Balance in the Three Gorges Reservoir Area in China, with CoupModel

Precipitation, throughfall, stemflow, and soil water content were measured, whereas interception, transpiration, evaporation, deep percolation, and soil water recharge were estimated in three plots, including oak (Lithocarpus glaber), Chinese fir (Cunninghamia lanceolata) forestlands, and maize (Zea mays) farmland in the Three Gorges Reservoir in China. A physical process-based model (CoupModel) was set up with climatic measurements as input and was calibrated with throughfall and vertical frequency domain reflectometry measurements from January 2018 to December 2019. Simulated values of soil moisture were fairly consistent with measured ones, with a determination coefficient (R2) of 0.73–0.91. Evapotranspiration was the main output of water balance, with a percentage of up to 61%, and such output was ranked as follows: oak forest (720 mm/y) > Chinese fir forest (700 mm/y) > maize farmland (600 mm/y). Afforestation influenced water balance, and water recharge was generally less significant in oak forestland than in Chinese fir forestland. Annual simulated deep percolation decreased by 60 mm for oak and 47 mm for Chinese fir compared with that for farmland (452 mm/y) and even more significantly in wet years. This decrease was mainly attributed to increased interception (122–159 mm/y) and transpiration (49–84 mm/y) after afforestation. Simulations indicated that vegetation species significantly influenced the magnitude of water balance components, calling for further attention to the selection of regrown tree species in the planning for afforestation projects, particularly for such projects that aim to improve the quantity of water infiltrating groundwater. Soil and water conservation measures should also be applied scientifically when converting farmland to forest in this area, particularly in the oak forest stand. View Full-Text
Keywords: CoupModel; water balance; afforestation; Three Gorges Reservoir area; oak; Chinese fir; maize CoupModel; water balance; afforestation; Three Gorges Reservoir area; oak; Chinese fir; maize
►▼ Show Figures 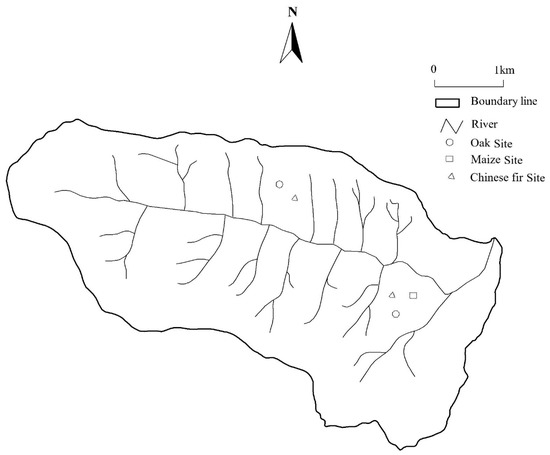