Did the Construction of the Bhumibol Dam Cause a Dramatic Reduction in Sediment Supply to the Chao Phraya River?
Previous Article in Special Issue

The invasion success of non-native fish, such as Pyrenean gudgeon Gobio lozanoi in several Iberian rivers, is often explained by the expression of its life history traits. This study provides the first insights into the reproductive traits, fish condition, and energy allocation (protein and lipid contents of tissues) of this species, along a longitudinal gradient in one of the most regulated river basins in the Iberian Peninsula, the Segura river. Larger sizes of first maturity, higher fecundity and larger oocytes were found in fluvial sectors with the most natural flow regimes, characterised by a low base flow with high flow peaks in spring and autumn. A delay in the reproductive period, lower fish condition and no differences in sex-ratio were observed in fluvial sectors with a high increase in base flow and notable inversion in the seasonal pattern of flow regime. Lipid contents in the liver and gonads were stable during the reproductive cycle and decreases in muscle were noted, whereas ovarian and liver proteins increased. In relation to energy allocation for G. lozanoi, an intermediate energy strategy was observed between income and capital breeding. Our results support the hypothesis that the high plasticity of G. lozanoi population traits plays a significant role in its success in a highly regulated Mediterranean river basin. Understanding the mechanisms by which flow regulation shapes fish populations in Mediterranean type-rivers could inform management actions. View Full-Text
Keywords: energy allocation; fecundity; flow regulation; Mediterranean-type river cyprinids; invasive fish energy allocation; fecundity; flow regulation; Mediterranean-type river cyprinids; invasive fish
►▼ Show Figures 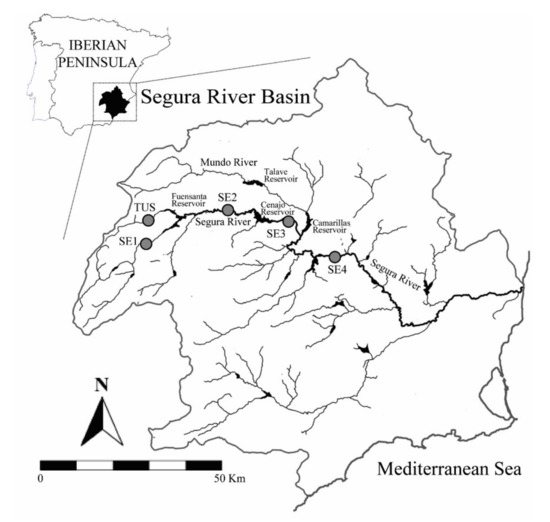