Application of a Single Porous Basket as a Pier Scour Countermeasure

In recent years, rock scouring or erosion downstream of dams has become an increasing dam safety concern. Several theoretical, semi-theoretical, semi-analytical and numerical methods can be used to assess the rock erosion in hydraulic structures. Semi-theoretical approaches determine the correlation between the erosive intensity of fluid flow and the resistive capacity of rock. Such approaches establish the scour thresholds as a function of erosive intensity of water and several rock mass indices by using in situ data and a curve-fitting approach. In some studies, the excavatability index, initially developed for rock mass stability analysis, was used to analyse the rock mass resistance in hydraulic erodibility analysis. The effectivity and weight of the geomechanical parameters used are yet to be determined on the basis of the erodibility phenomenon. The semi-analytical methods are developed on the basis of the mechanical and hydraulic interaction of rock mass and water. Four methods developed by Bollaert et al. are important in determining the erodibility in the plunge pool, but they are not applicable in the case of spillways. They used the comprehensive fracture mechanics for closed-end joints, quasi-steady impulsion, and dynamic impulsion (DI) for blocky rock erosion. The application of these methods to each site is necessary to identify constants that are difficult to determine. Few numerical methods are available to assess the rock mass erosion in hydraulic structures. In the case of numerical methods, the erosive agent is indistinct, and the hydraulic hazard parameter on the spillway surface is almost challenging to apply. This study comprehensively reviews the mechanism of erosion and the methods for assessing the risk of potential rock mass erosion downstream of dams and hydraulic structures. The advantages and disadvantages of all methods are discussed and the potential future research directions in this domain are proposed. View Full-Text
Keywords: erodibility; scour; spillways; plunge pools; dam; hydraulic; rock mass erodibility; scour; spillways; plunge pools; dam; hydraulic; rock mass
►▼ Show Figures 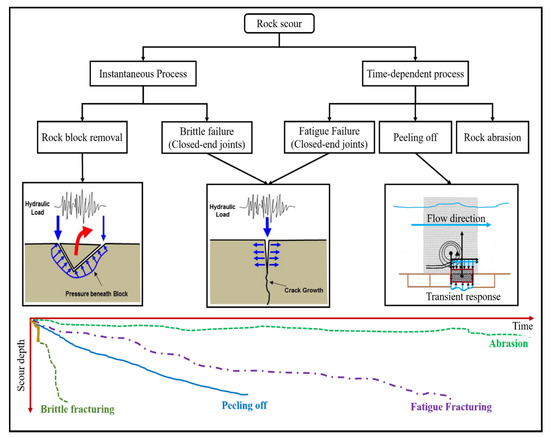