Watershed-scale hydrological models have become important tools to understand, assess, and predict the impacts of natural and anthropogenic-driven activities on water resources. However, model predictions are associated with uncertainties stemming from sources such as model input data. As an important input to most watershed models, land use/cover (LULC) data can affect hydrological predictions and influence the interpretation of modeling results. In addition, it has been shown that the use of soft data will further ensure the quality of modeling results to be closer to watershed behavior. In this study, the ecologically relevant flows (ERFs) are the primary soft data to be considered as a part of the modeling processes. This study aims to evaluate the impacts of LULC input data on the hydrological responses of the rapidly urbanizing Upper Cahaba River watershed (UCRW) located in Alabama, USA. Two sources of LULC data, i.e., National Land Cover Database (NLCD) and Digitized Landsat 5 Thematic Mapper (TM) images, were used as input in the Soil and Water Assessment Tool (SWAT) model for the years 1992 and 2011 using meteorological data from 1988 to 2013. The model was calibrated at the watershed outlet against daily streamflow from 1988 to 1993 using the 1992 LULC data and validated for the 2008–2013 period using the 2011 LULC datasets. The results show that the models achieved similar performances with both LULC datasets during the calibration and validation periods according to commonly used statistical rating metrics such as Nash Sutcliffe efficiency coefficient (NSE), coefficient of determination (R2), and model percent bias (PBIAS). However, LULC input information had substantial impacts on simulated ERFs such as mean monthly streamflow, maximum and minimum flows of different durations, and low flow regimes. This study demonstrates that watershed models based on different sources of LULC and applied under different LULC temporal conditions can achieve equally good performances in predicting streamflow. However, substantial differences might exist in predicted hydrological regimes and ERF metrics depending on the sources of LULC data and the LULC year considered. Our results reveal that LULC data can significantly impact the simulated flow regimes of the UCRW with underlaying influences on the predicted biotic and abiotic structures of aquatic and riparian habitats. View Full-Text
Keywords: land use/cover change; SWAT; NLCD; uncertainty; flow regimes; soft data; land use/cover input data; equifinality land use/cover change; SWAT; NLCD; uncertainty; flow regimes; soft data; land use/cover input data; equifinality
►▼ Show Figures 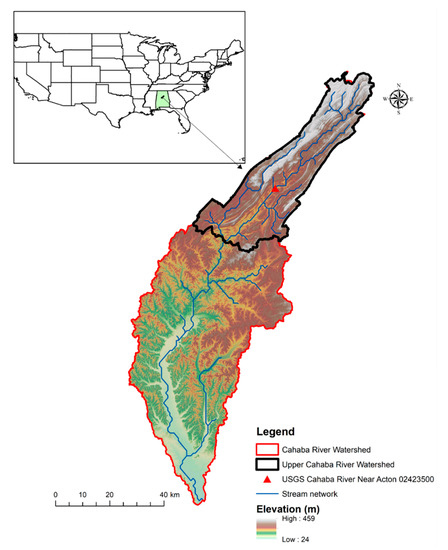