The 2018 summer drought in Europe was particularly extreme in terms of intensity and impact due to the combination of low rainfall and high temperatures. However, it remains unclear how this drought developed in time and space in such an extreme way. In this study we aimed to get a better understanding of the role of land–atmosphere interactions. More specifically, we investigated whether there was a change in water vapor originating from land, if that caused a reduction in rainfall, and by this mechanism possibly the propagation and intensification of the drought in Europe. Our first step was to use remote sensing products for soil moisture content (SMC) and the normalized difference vegetation index (NDVI) to see where the 2018 drought started and how it developed in time and space. Our SMC and NDVI analysis showed that the 2018 drought started to impact the soil and vegetation state in June in Scandinavia and the British Isles. After that it moved towards the west of Europe where it intensified in July and August. In September, it started to decay. In October, drought was observed in Southeast Europe as well. Based on the observed patterns we divided Europe into six regions of similar spatiotemporal characteristics of SMC and NDVI. Then, we used a global gridded dataset of the fate of land evaporation (i.e., where it ends up as precipitation) to investigate whether the drought intensification and propagation was impacted by the reduction in water vapor transported from the regions that first experienced the drought. This impact was investigated by identifying the anomalies in the water vapor originating from land recycling, imports, and exports within Europe during the spring, summer, and autumn seasons. From these regions we identified four drought regions and investigated the changes in water vapor originating from source regions on the development of drought in those regions. It was found that during the onset phase of the 2018 drought in Europe that the water vapor originating from land played an important role in mitigating the precipitation anomalies as, for example, the share of land evaporation contributing to precipitation increased from 27% (normal years) to 38% (2018) during July in the west of Europe. Land evaporation played a minor role in amplifying it during the intensification phase of the drought as the share of land evaporation contribution to precipitation decreased from 23% (normal years) to 21% (2018) during August in the west of Europe. These findings are somewhat in contrast to similar studies in other continents that found the land surface to play a strong amplifying role for drought development. Subsequently, we found that the relative increase in the amount of land water vapor originating from eastern half of Europe played a role in delaying the onset and accelerating the decay of the 2018 drought in the west of Europe. View Full-Text
Keywords: drought; NDVI; soil moisture; moisture recycling; land–atmosphere interactions drought; NDVI; soil moisture; moisture recycling; land–atmosphere interactions
►▼ Show Figures 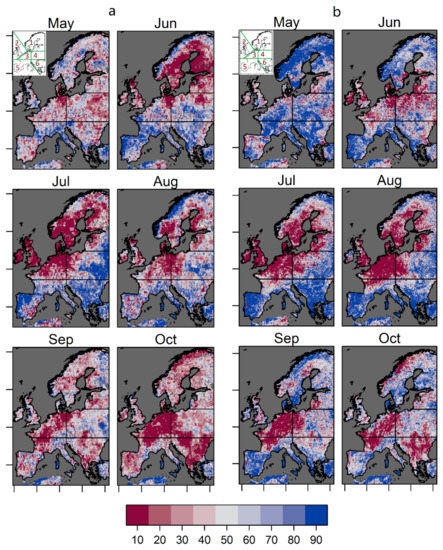