Hydrogeochemical Variability of the Acidic Springs in the Rio Tinto Headwaters

Peña de Hierro, located in southwest Spain, encompasses the springs and headwaters for the Rio Tinto River that emerge above normal faults and has been mined for its rich sulfide ore since 2500 BC. The springs are typically characterized by an orange coloration, typical pH of ~2.33, and contain elevated concentrations of heavy metals that are produced by acid rock drainage (ARD). ARD is a natural phenomenon that results from chemolithoautotrophs metabolizing the sulfide ore. Mining has amplified the magnitude of the acidity and concentrations of heavy metals evidenced within sedimentary cores from the Huelva estuary. Acidity, redox state, hydrochemistry and isotopic analyses were examined for the purpose of characterizing the subsurface flows and determining the interconnectivity of the groundwaters. Previous studies have documented the geochemistry of the springs, dating a select few, yet many springs remain uncharacterized. Acidity presented spatial variability throughout the field area, caused by extensive sulfide interactions which generated and modified the pH. Redox exhibited a large range of values due to oxygen diffusivity though the fracture network. The surrounding geology is highly heterogeneous because of intensive deformation during the Variscan and Tertiary periods, and this heterogeneity is shown in the varied aqueous chemistry. Fractionation patterns observed in δ2H and δ18O values predominantly reflected enrichment by intensive evaporation and depletion in δ18O as a result of the proposed sulfatic-water model for Rio Tinto’s hydrogeology. The analysis illustrates minimal hydrologic interconnectivity, evidenced by the extensive physical and chemical contrasts within such a small proximity. View Full-Text
Keywords: acid mine drainage; Rio Tinto acidic system; spring hydrogeochemistry; non-porous rock; fracture aquifer; Iberian Pyrite Belt; SW Spain acid mine drainage; Rio Tinto acidic system; spring hydrogeochemistry; non-porous rock; fracture aquifer; Iberian Pyrite Belt; SW Spain
►▼ Show Figures 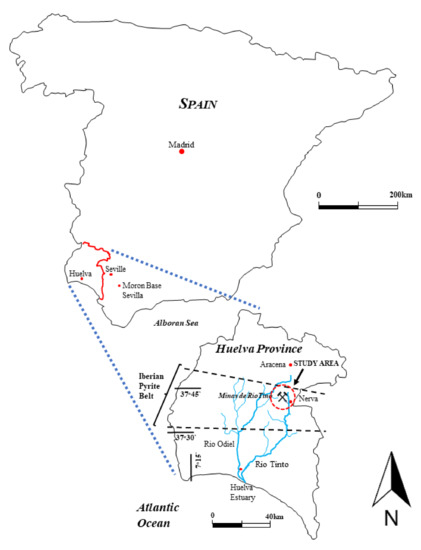