The Loess Plateau is situated in the upper and middle reaches of the Yellow River (as shown in Figure 1), with a latitude between 33°43′ and 41°16′ N and longitude between 100°54′ and 114°33′ E. The plateau is covered with a deep layer of loess with an average thickness of 50–200 m [24]. The overall terrain is high in the northwest and low in the southeast, ranging from 94 to 5000 m and with an area of 648,700 km2, approximately.
The Loess Plateau belongs to two temperate zones (warm temperate zone in the south and middle temperate zone in the north). It has the typical continental monsoon climate characteristics. The annual average temperature is from 4.3 °C to 14.3 °C, and the annual precipitation decreases gradually from the southeast to northwest, ranging from 200 to 750 mm. The total precipitation in the rainy season (June–September) accounts for about 65% of the annual precipitation [25].

This study mainly used the following data:
(1) Meteorological data. Meteorological data were collected from the China Meteorological Data Network (http://data.cma.cn/), and the temporal resolution of the data is 1 day. Meteorological data mainly include temperature, air pressure, wind speed, relative humidity, sunshine duration, and ground temperature data of 52 meteorological stations in the Loess Plateau, as shown in Table 1 and Figure 1. The precipitation data were collected from 368 rainfall gauge stations in and around the Loess Plateau region, and the spatial distribution is shown in Figure 1. The temporal resolution of the data is 1 day.
(2) Reanalysis Dataset. NCEP/NCAR reanalysis dataset was created through the cooperative efforts of the National Centers for Environmental Prediction (NCEP) and National Center for Atmospheric Research (NCAR), available at (https://psl.noaa.gov/data/gridded/data.ncep.reanalysis.html). The spatial resolution of the dataset is 2.5° × 2.5°, and the temporal resolution is 1 day. The dataset used in this study included u/v wind, and specific humidity for 1000, 925, 850, 700, 600, 500, 400, and 300 hPa; precipitation water (PW).
(3) Remote sensing data. Before 1999, the NDVI data were from the National Earth System Science Data Center, National Science & Technology Infrastructure of China (http://www.geodata.cn). After 1999, the NDVI data were from MODIS datasets (https://ladsweb.modaps.eosdis.nasa.gov/search/).

Mann–Kendall is a nonparametric analysis used to estimate the significance of the trend of hydrological and meteorological [26]. The evaluating variable Z is often used to estimate whether a series has a significant trend or not, which was calculated as follows: where and are the sequential values, and is the length of the time series.
The variance of S is given by the following equation: where is the length of the data series.
The evaluating variable indicates the trend of the time series; when , the trend is increasing; otherwise, it is decreasing. When || ≥ 1.64, the trend is significant at 90% confidence; when || ≥ 1.96, the trend is significant at 95% confidence [27].

3.3. Calculation of the Five Main Factors

In this study, we aim to analyze the main driving factors of precipitation in the condition of vegetation recovery and climate change, and comprehensively considered five factors. PET is selected as the climate factor, NDVI and ST as the underlying surface change factor, and PW and WVT as the water vapor factor of atmospheric circulation. Moreover, CO2 is also a potential influencing factor worthy of consideration. However, the previous study showed that the elevated CO2 was not the most primary factor for ET change in the Three-North Region including the Loess Plateau in China [30]. Meanwhile, there are no gridded data of CO2 concentration from 1985 to 2014 in the world. Therefore, we decided not to consider the effect of CO2 in this study. Finally, the five main factors are calculated as follows.

Potential evapotranspiration (PET) is a typical indicator that reflects the comprehensive effect of the climate [31]. Therefore, we selected PET as the climate factor. PET is estimated through the Penman–Monteith (P–M) method that is based on the meteorological data and parameters, which is widely used and recommended by numerous international organizations. The formula is as follows: where PET is the potential evapotranspiration, in mm/day; is the net solar radiation, in MJ/m2; G is the soil heat flux, in MJ/m2; is the slope of the saturation vapor pressure curve, in kPa/°C; is the psychometric constant, in kPa/°C; T is the daily temperature, in °C; is the saturation vapor pressure, in kPa; is the actual water vapor pressure, in kPa; is the daily average wind speed at 2 m height, in m/s. The data of temperature, air pressure, wind speed, relative humidity, and sunshine duration were collected from the 52 meteorological stations on the Loess Plateau. refers to the surface ingoing energy minus the surface outgoing energy, which can be expressed as: where is the incoming short-wave radiation (W/m2); and are the incoming long-wave radiation and outcoming long-wave radiation (W/m2), respectively; is the surface short-wave albedo; and is the land surface emissivity.

Precipitable water (PW) plays a decisive role in latent heat transportation, cloud formation, and the occurrence of precipitation [33,34,35], which is defined as the depth of liquid water produced after all the water vapor in the unit air column has condensed and landed. In this study, we selected PW as one of the main factors. Zhao et al. [36] found that NCEP reanalysis data were highly correlated with the observational data from the perspective of climatological statistics. Therefore, the data of PW were collected from the NCEP/NCAR reanalysis dataset with a spatial resolution of 2.5° × 2.5° and a temporal resolution of one day.

In order to eliminate the multi-collinearity among various factors, principal component regression analysis was used to quantitatively analyze the impact of each factor on precipitation. Principal component analysis can transform multiple indicators into fewer well-represented comprehensive indicators that reduce dimensionality and simplify the data structure [44,45,46].
Suppose that there are p indicators involved with a certain object, denoted by ,,...,. These p indicators compose a p-dimensional vector: X = (,,...,). After dimension reduction, new variables , , …, (m ≤ p) are obtained:
In this study, the principal component analysis method is used to convert five factors into several independent principal components. Then, combined with multiple linear regression, the principal component with a contribution rate more than 90% is selected for regression analysis [21,22], and the relative influence degree of each factor is calculated by the weight of the regression coefficient, which is calculated as follows: where Y is the dependent variable, are the independent variables and the corresponding regression coefficients, and is the relative influence degree of the change in to the change in Y. We eliminated the influence of dimensionality through data standardization [47], and the statistical calculations in this study were through SPSS 20.

4.1. The Spatial-Temporal Characteristic of Precipitation Changes in the Loess Plateau

4.1.1. The Temporal Variability of Precipitation

4.1.2. Changes and the Continuity of Station-Scale Precipitation in the Loess Plateau before and after GFGP

4.1.3. The Spatial Variability of Precipitation

4.2. The Spatial-Temporal Characteristic of the Main Influencing Factors

4.2.1. The Annual and Seasonal Variation in the Main Factors

The annual and seasonal variation in the five factors on the Loess Plateau from 1985 to 2014 are shown in Figure 6, and the significance of the changing trend of each factor is tested based on M-K analysis.
As shown in Figure 6, the PETA and PETS changed from the increase trend in Period I to the decrease trend in Period II, and the PETW increased all the time. The NDVIA and NDVIW in Period I showed a slight upward trend; moreover, in Period II, NDVIA, NDVIS, NDVIW all showed an increasing trend with a 95% confidence level. It should be noted that the NDVI showed a gradually increasing trend from 2000 to 2003, but increased afforestation would increase transpiration and lead to water shortages; vegetation growth is restricted, which may be one of the reasons that NDVI showed a slightly decreasing between 2004 and 2006. After 2009, the NDVI gradually increased, which was mainly due to the surviving vegetation beginning to flourish after adapting to the local environment. Therefore, there may be a lag period for vegetation restoration. The PWA and PWW both showed a decrease trend before and after the GFGP, but PWS kept increasing. The ST showed an increasing trend, but the increase rate of ST in Period II was lower than that in Period I. The WVTA, WVTS, and WVTW showed a statistically significant downward trend with a 95% confidence level in Period I, but increasing in Period II. Together, from the temporal trend of each factor, the PET, NDVI, and WVT changed before and after the GFGP.

4.2.2. The Spatial Variability of the Main Factors

4.3. Identification of the Main Influencing Factors of Precipitation Change

4.3.2. The Relative Influence Degree of the Five Factors to Precipitation Change

5.1. Identification of Main Factors in Sub-Regions

5.2. The Comparison between Our Findings and Those of the Previous Studies

Research design and organization, X.G.; data processing and writing—original draft preparation, J.W.; draft modification, writing—review, M.S.; supervision and funding acquisition, X.Z. and Y.Z. All authors have read and agreed to the published version of the manuscript.

This research was funded by the Technological Innovation Project of Shaanxi Academy of Forestry (SXLk2020-0304).

This study is supported by the Technological Innovation Project of Shaanxi Academy of Forestry (SXLk2020-0304) and the National Key Research and Development Program of China (2018YFF0215702). The research kindly thanks the data support from the “National Earth System Science Data Center, National Science & Technology Infrastructure of China. (http://www.geodata.cn)”. Thanks are also extended to anonymous reviewers for their insights and recommendations. 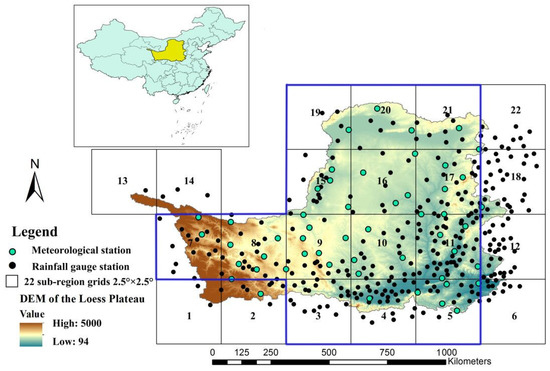 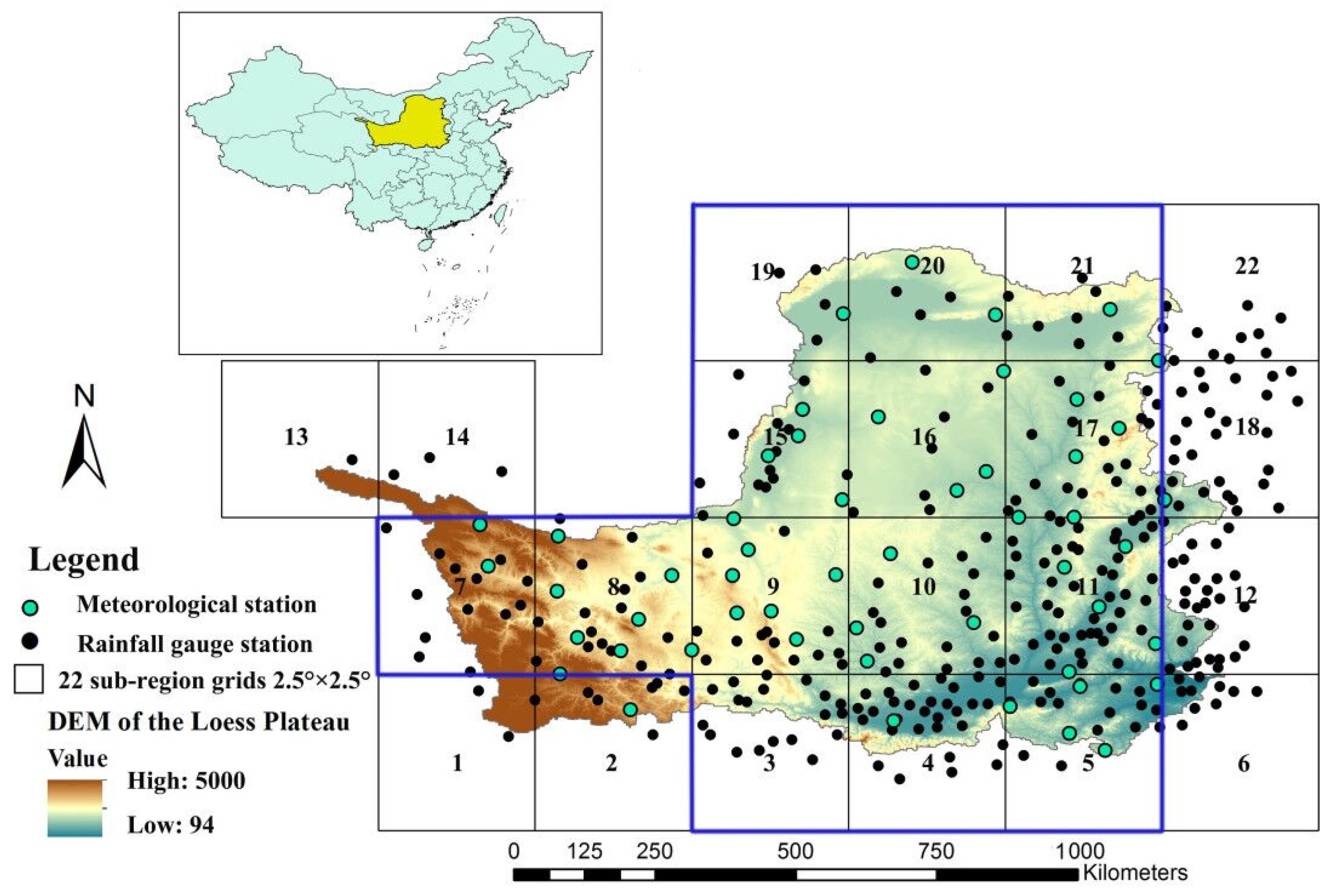 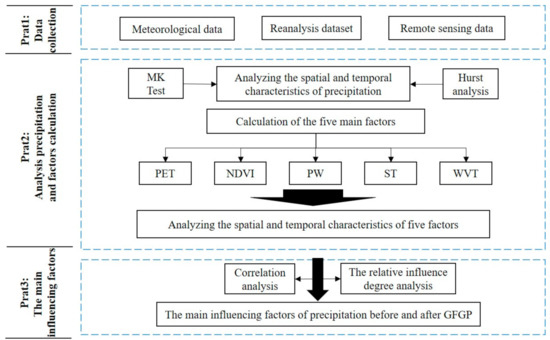 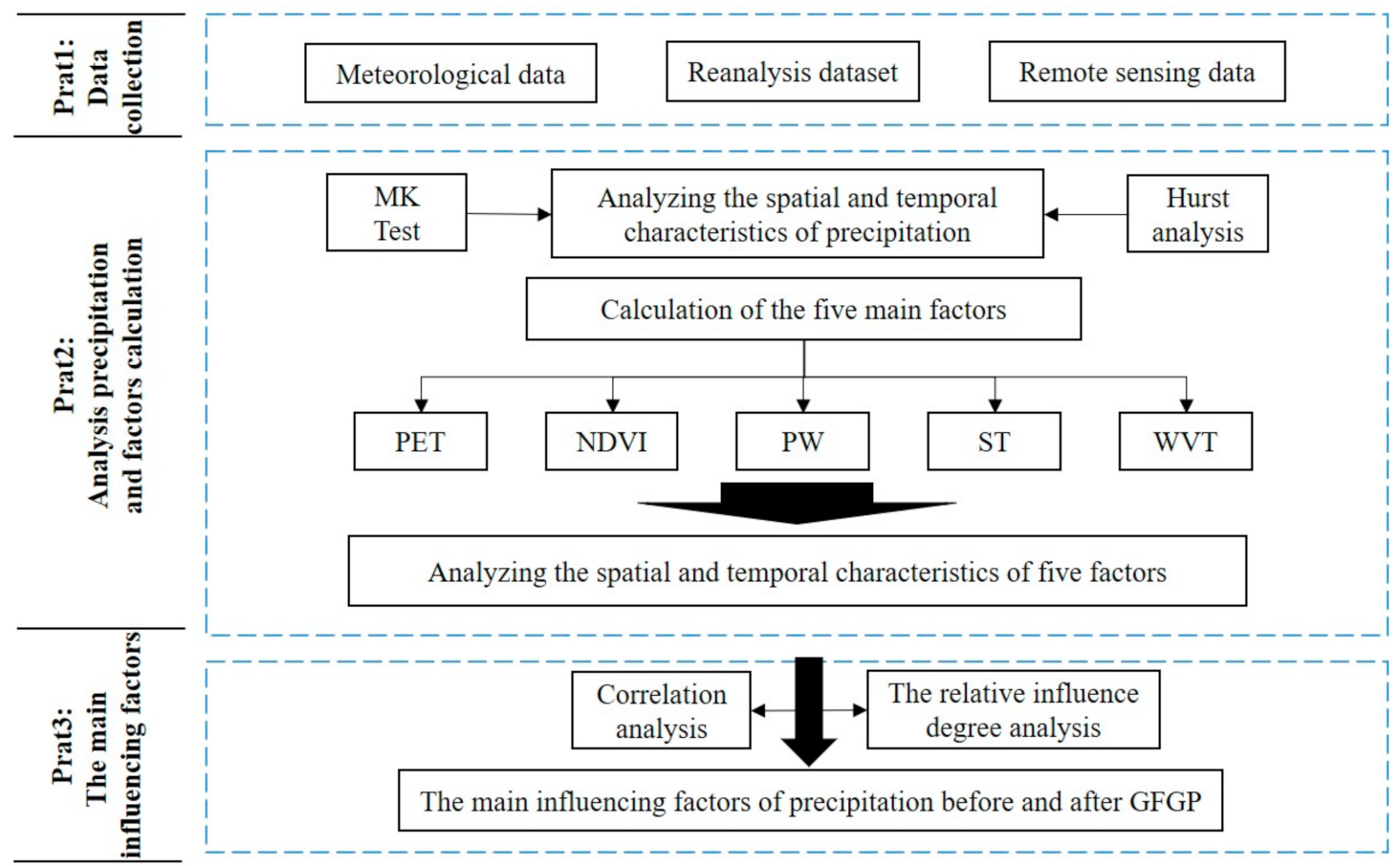 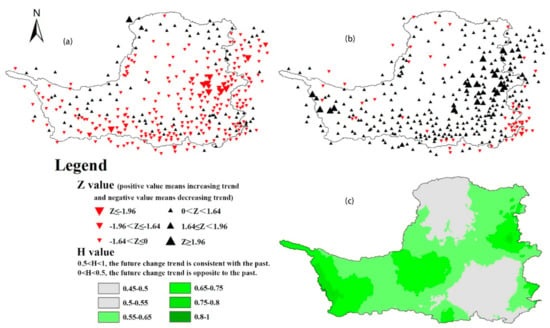 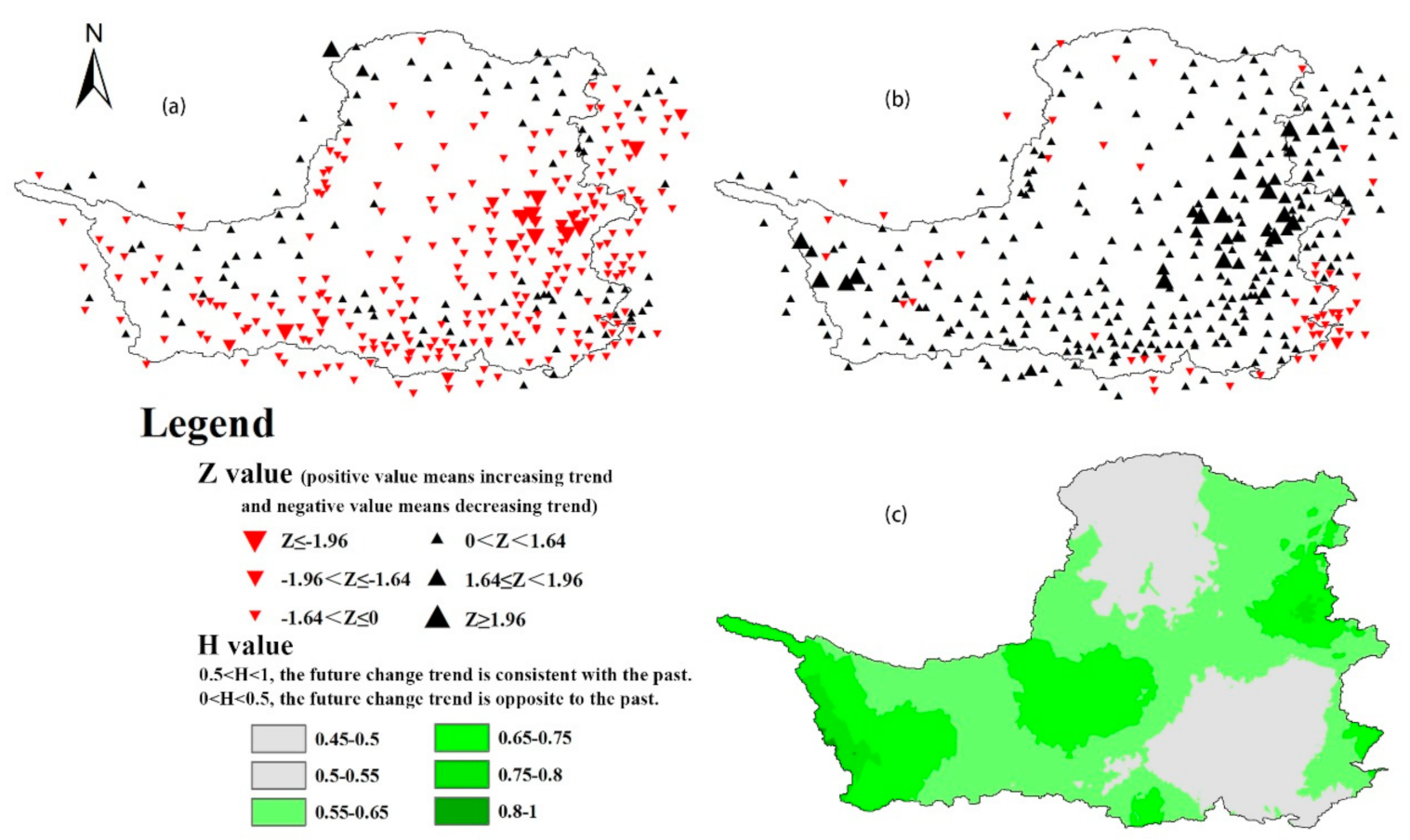 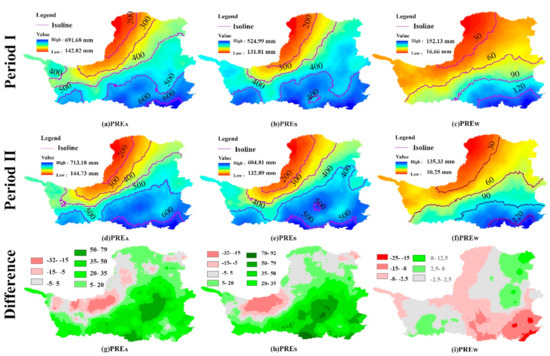 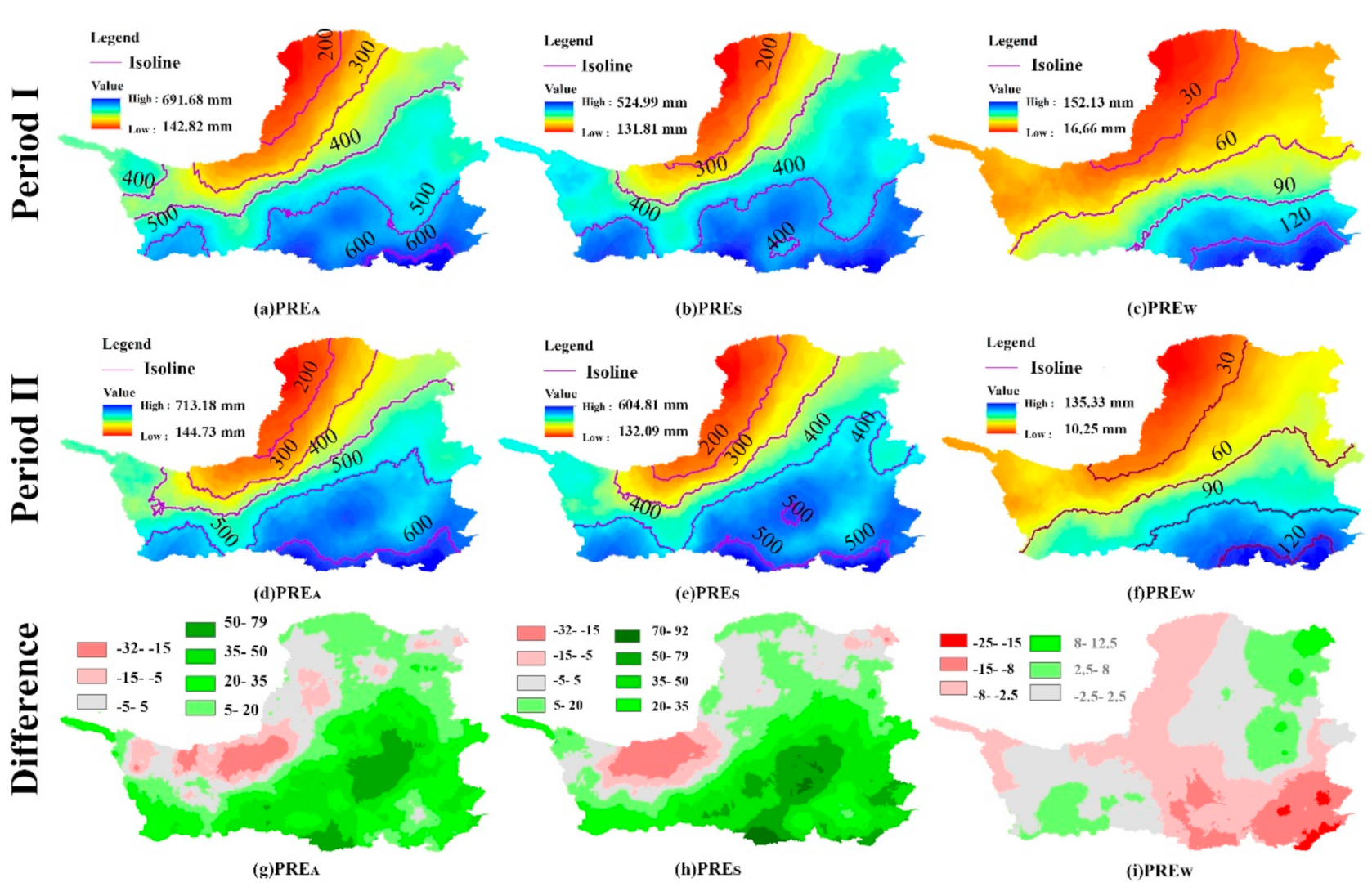 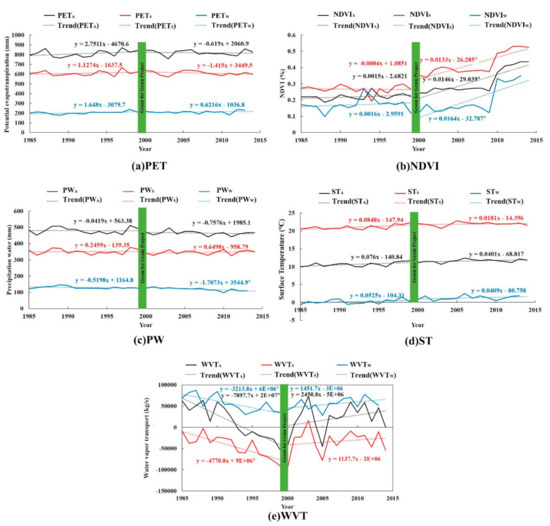 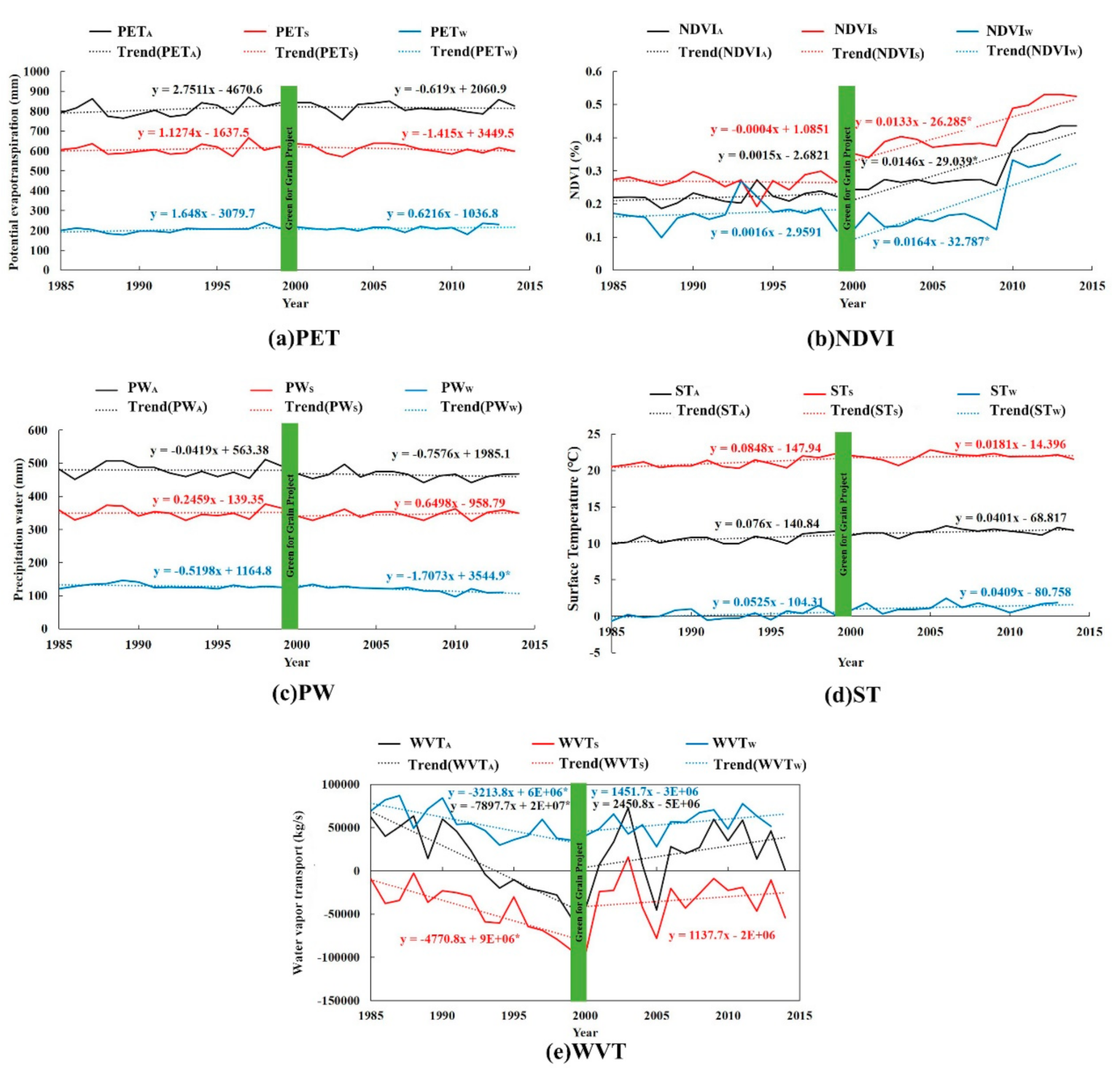 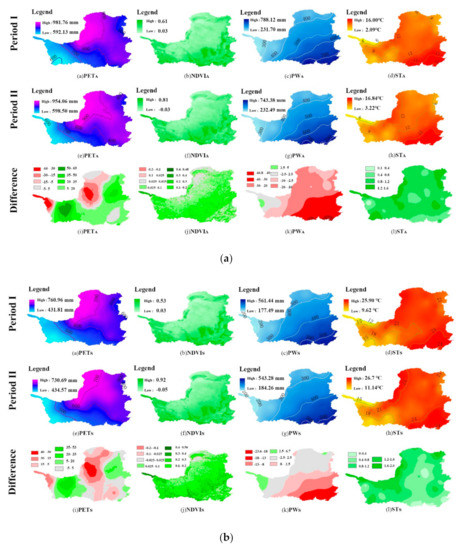 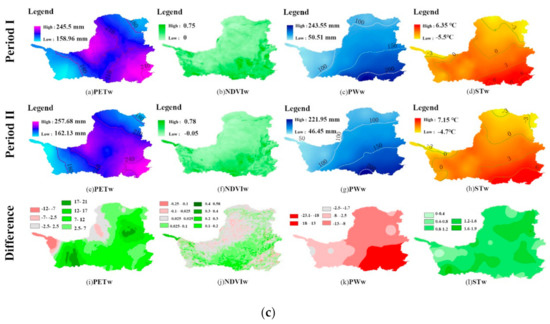 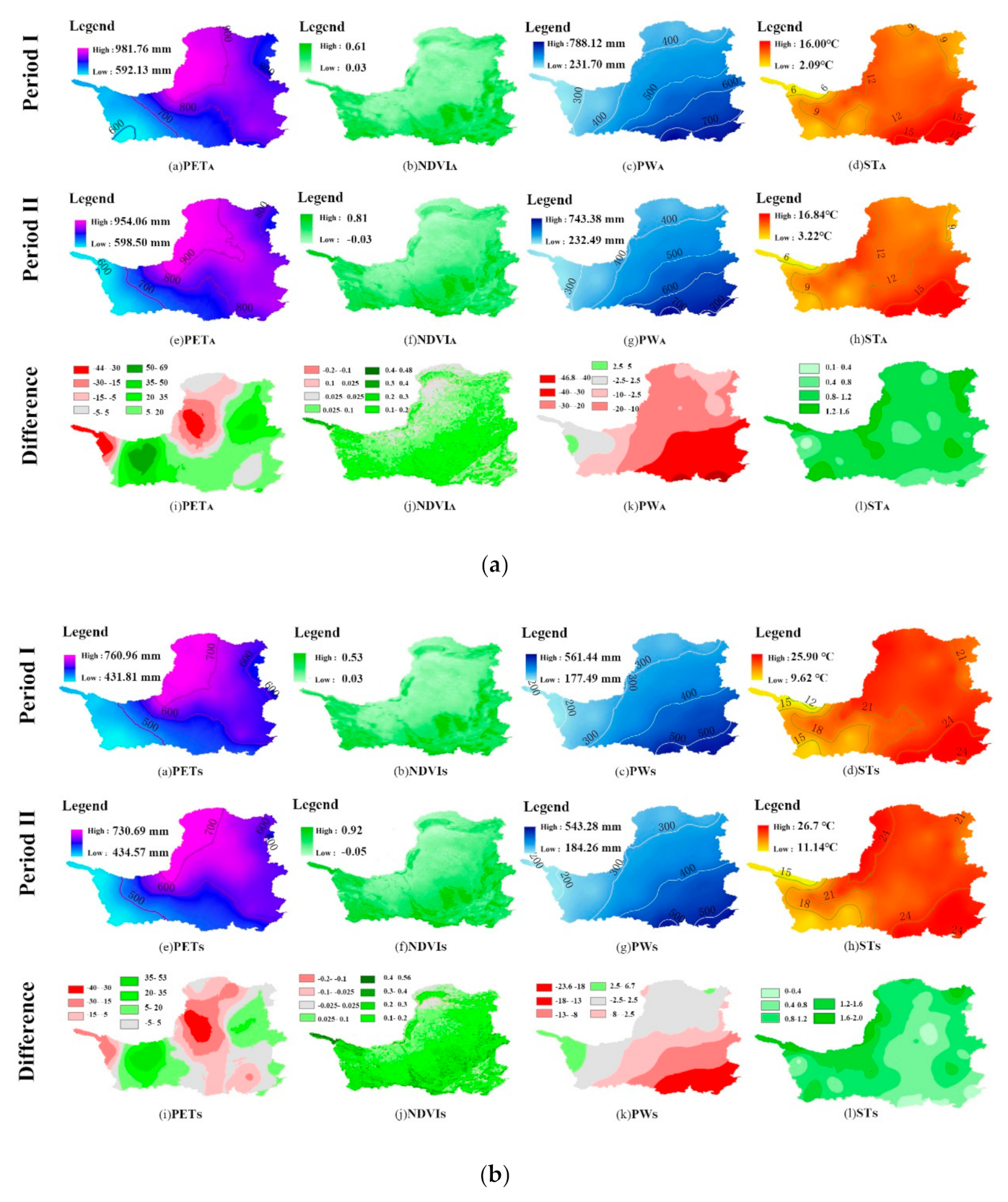 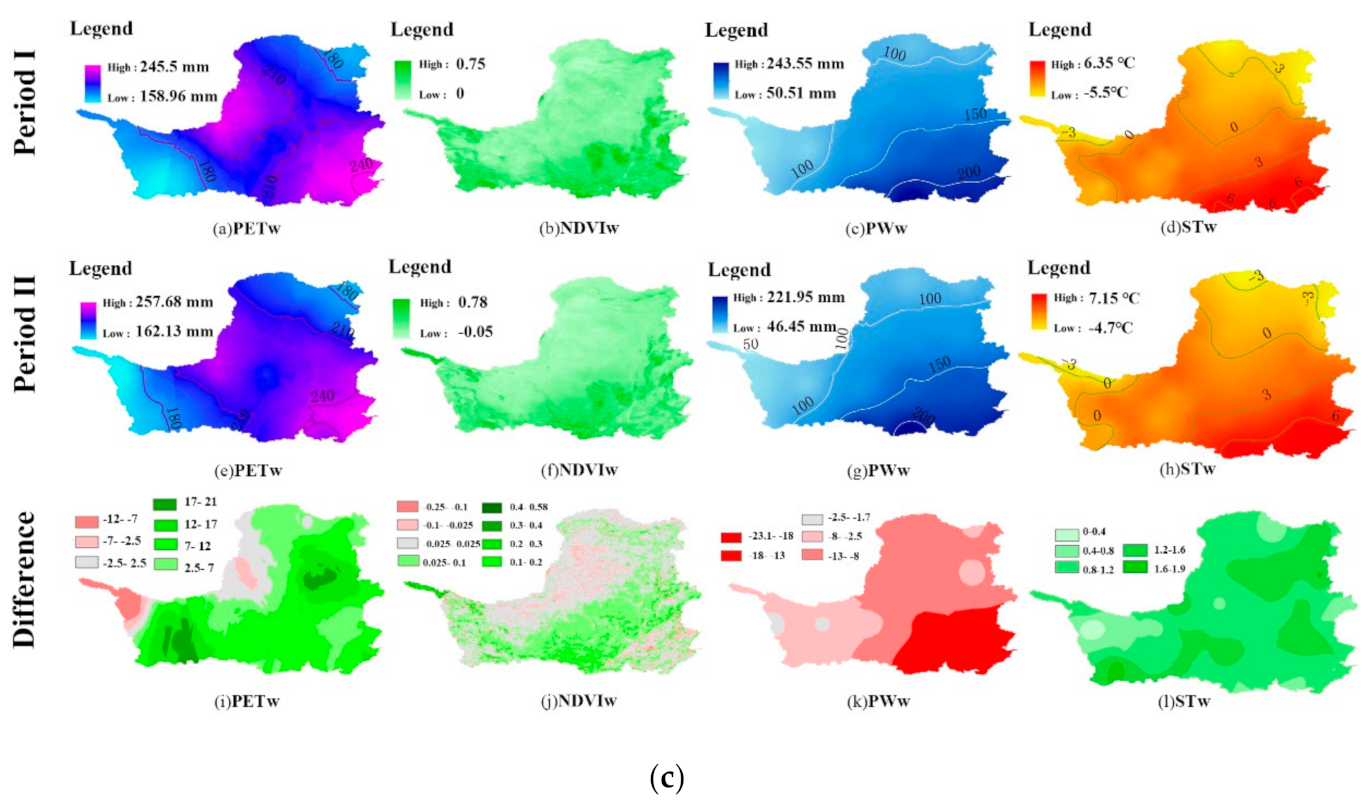 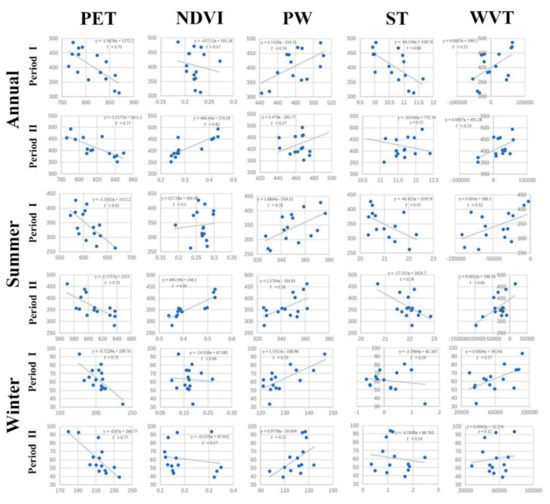 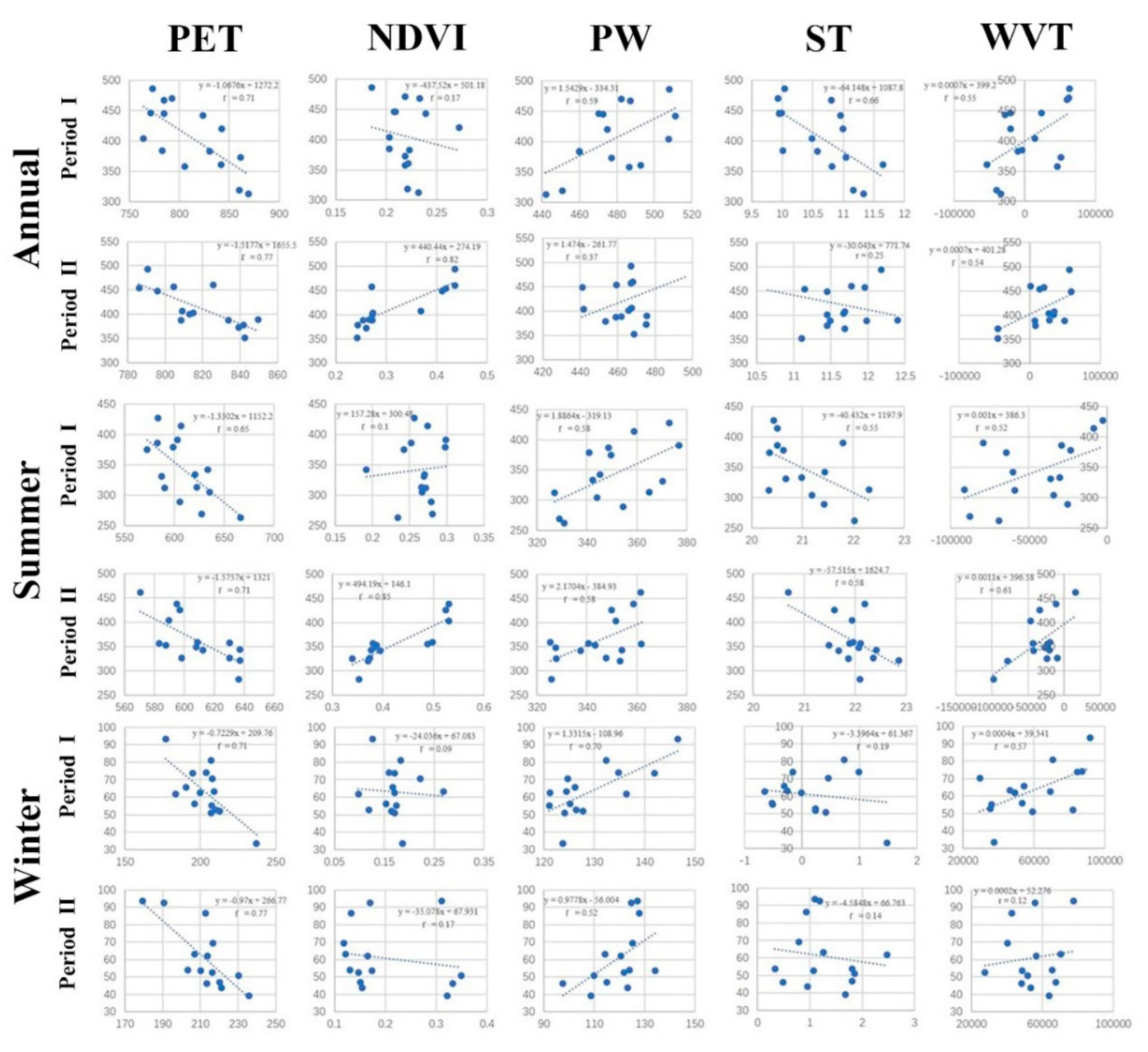 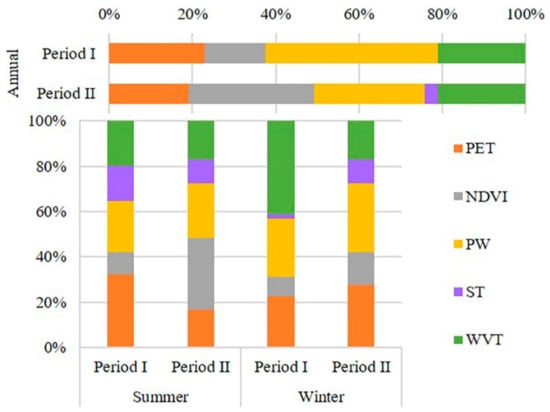 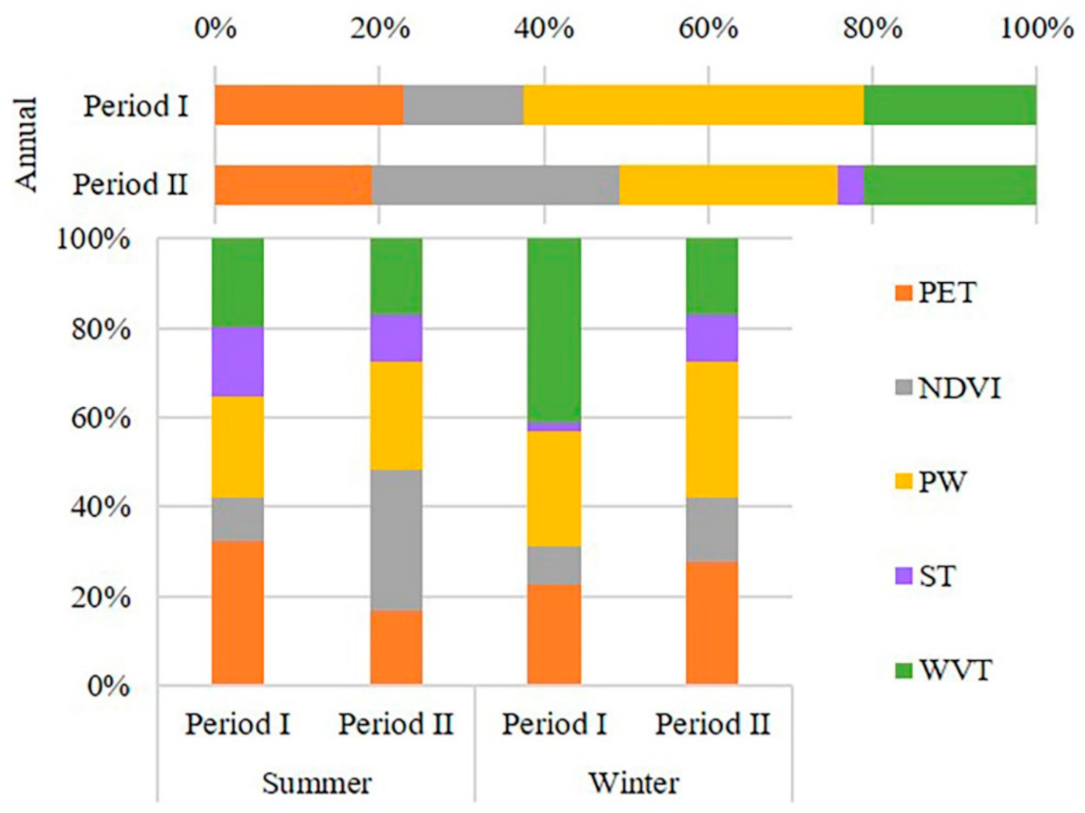 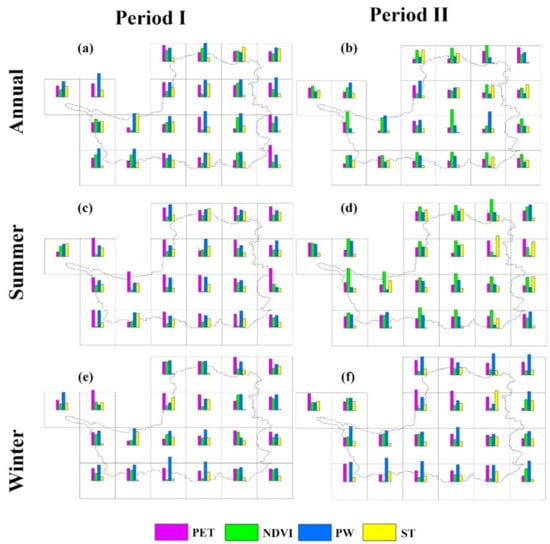 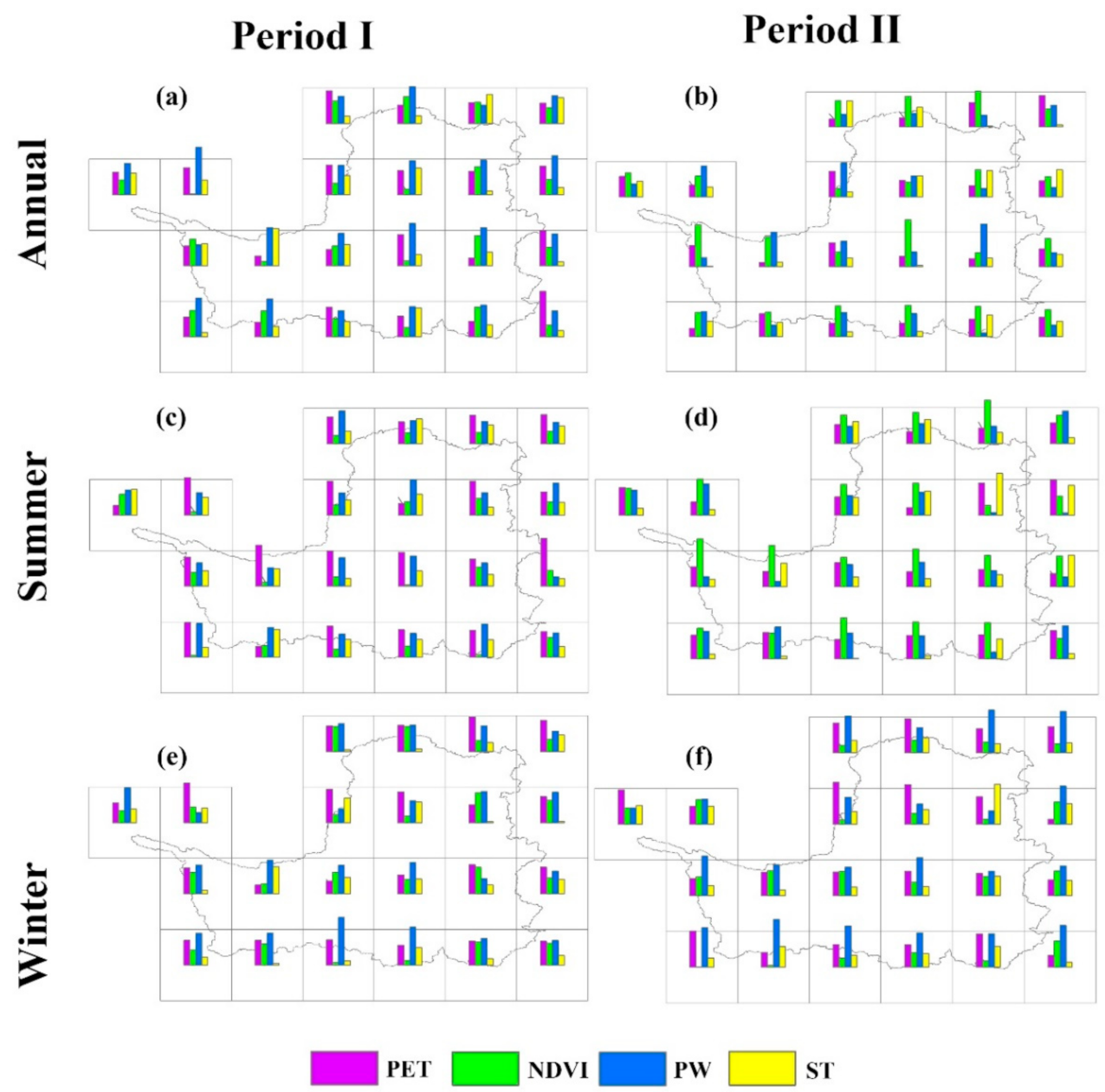