Geomorphology of Canyon Outlets in Zrmanja River Estuary and Its Effect on the Holocene Flooding of Semi-enclosed Basins (the Novigrad and Karin Seas, Eastern Adriatic)

During the lowstand sea-level phase of the Last Glacial Maximum (LGM), a large part of the current Mediterranean continental shelf emerged. Erosional and depositional processes shaped the coastal strips, while inland areas were affected by aeolian and fluvial processes. Evidence of both the lowstand phase and the subsequent phases of eustatic sea level rise can be observed on the continental shelf of Sardinia (Italy), including submerged palaeo-shorelines and landforms, and indicators of relict coastal palaeo-environments. This paper shows the results of a high-resolution survey on the continental shelf off San Pietro Island (southwestern Sardinia). Multisensor and multiscale data—obtained by means of seismic sparker, sub-bottom profiler chirp, multibeam, side scan sonar, diving, and uncrewed aerial vehicles—made it possible to reconstruct the morphological features shaped during the LGM at depths between 125 and 135 m. In particular, tectonic controlled palaeo-cliffs affected by landslides, the mouth of a deep palaeo-valley fossilized by marine sediments and a palaeo-lagoon containing a peri-littoral thanatocenosis (18,983 ± 268 cal BP) were detected. The Younger Dryas palaeo-shorelines were reconstructed, highlighted by a very well preserved beachrock. The coastal paleo-landscape with lagoon-barrier systems and retro-littoral dunes frequented by the Mesolithic populations was reconstructed. View Full-Text
Keywords: submarine geomorphology; morphostratigraphy; sea-level changes; Last Glacial Maximum; Sardinia; Italy submarine geomorphology; morphostratigraphy; sea-level changes; Last Glacial Maximum; Sardinia; Italy
►▼ Show Figures 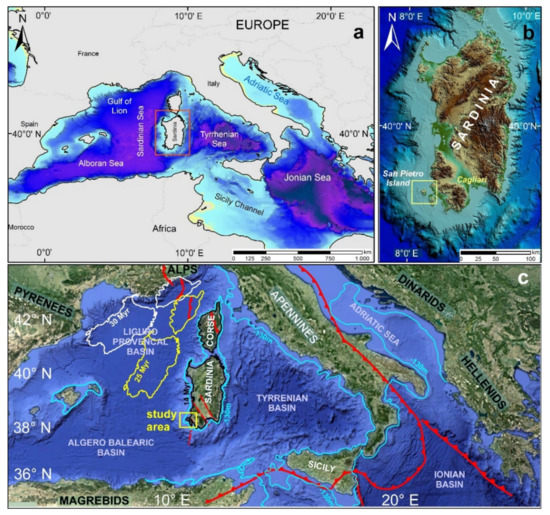