Crustaceans in the Meiobenthos and Plankton of the Thermokarst Lakes and Polygonal Ponds in the Lena River Delta (Northern Yakutia, Russia): Species Composition and Factors Regulating Assemblage Structures

Trophic resource partitioning is one of the main drivers of adaptive radiation. The evolutionary diversification of large African barbs, the genus Labeobarbus, seems to be related to mouth polymorphism. The chisel-mouthed or scraping phenotype has repeatedly evolved within Labeobarbus. At least five ecomorphs with a scraping mouth morphology were detected in the waters of the Ethiopian Highlands and can be provisionally classified into two groups: (i) “Varicorhinus”-like, and (ii) “Smiling”-like. Previously, all Labeobarbus with a scraping-mouth morphology were considered to be periphyton feeders. Using data on morphology, diet and stable isotope ratios (C and N), we addressed the question: does a scraping-mouth morphology predict feeding on periphyton? Our study revealed that five scraper ecomorphs exhibited three main feeding modes: (i) periphyton-eating, (ii) herbivory–detritivory, and (iii) insectivory. Two cases of the parallel divergence of sympatric ecomorphs with distinct feeding modes (herbivory–detritivory vs. insectivory) were revealed in two geographically isolated basins. A significant difference in δ15N values was detected among sympatric scraper ecomorphs. A periphytonophagous scraper was rich in δ15N values that are comparable with those in sympatric piscivorous fish. This data sheds light on the possibility of the utilization of periphyton as a protein-rich food by fishes. View Full-Text
Keywords: adaptive radiation; ecological speciation; fishes; Africa; trophic resource partitioning; stable isotopes adaptive radiation; ecological speciation; fishes; Africa; trophic resource partitioning; stable isotopes
►▼ Show Figures 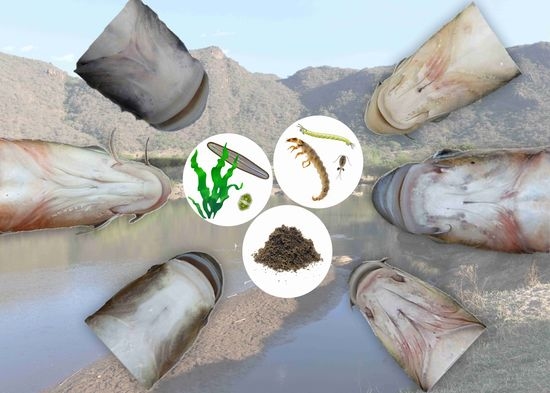