:
Persistent organic pollutants (POPs) have been at the forefront of environmental contamination research even before their ban in 2001 at the Stockholm Convention. Their relation to different compartments of the environment (biotic and abiotic) has been thoroughly investigated. This article aims to identify whether the benthos could represent a reliable indicator of environmental contamination with POPs and to highlight its potential transfer role between abiotic and upper trophic compartments—benthos feeders. In this regard, we determined that the Ephemeroptera samples have higher concentrations (p < 0.05) of ΣPCB, ΣHCH, and ΣDDT than sediment samples while Trichoptera samples have higher concentrations (p < 0.05) only in the case of ΣPCB and ΣDDT. This, along with the fact that the frequency of detection for POPs is similar between the sample types (sediments, Trichoptera, and Ephemeroptera), makes the benthos samples valuable indicators of contamination with sediment samples working as complementary information about how recent the contamination is.
Keywords:
lotic ecosystem; organochlorine pesticides; polychlorinated biphenyls; sediments; benthos

For the extraction of OCPs and PCBs from sediment and from benthos (insect larvae), we used a method involving 3:2 cyclohexane:acetone and ultrasonication [71]. Sediment was dried overnight in a desiccator, ground up with a mortar and pestle, and 5 g was used for extraction. In the case of benthos samples, the entire biomass was used for extraction. Internal standards (PCB 29, 112, 207) were added, and then the powder was extracted twice by ultrasonication using a Q500 sonicator (QSonica) (Newtown, CT, USA) and cyclohexane:acetone (3:2). The extract was separated from the sediment using an NF 800 R (Nüve) (Ankara, Turkey) centrifuge for 10 min at 2000 rpm; the supernatant (liquid extract) was transferred and calibrated to volume (1 mL) by evaporation. The extract was purified using clean sulfuric acid (96%) (Sigma-Aldrich) (Bucureşti, Romania), and the resulting solution was calibrated to volume (1 mL) by evaporation. A volume of 0.5 mL was transferred to vials and stored for a maximum of two weeks before injection.

We investigated the ratios of p,p’-DDD/p,p’-DDE [76] and (p,p’-DDE + p,p’-DDD)/p,p’-DDT [77] and their differences between the analyzed sample types; the ratios were calculated for the samples where all the compounds were present. We analyzed the data distribution by employing the Shapiro–Wilk normality test implemented in the base R 4.1.0 package. Afterward, a Kruskal–Wallis test was done in the base R 4.1.0 package, followed by a check of the empirical cumulative distribution functions (ECDF) of the investigated groups using the latticeExtra package in R. Based on the findings, the Conover–Iman multiple comparisons test with Bonferroni correction was implemented using the DescTools package in R, taking into account the adjusted p values (p < 0.05 was considered significant). Spearman’s rank correlation analysis was done in GraphPad Prism version 6.0 (p < 0.05 was considered significant). The graphs were generated with the ggplot2 [78] package in R 4.1.0 and with GraphPad Prism version 6.0. The map (Figure 1) was generated using the QGIS 3.6 software [79] and the Natural Earth Data maps.

The detection of Trichoptera and Ephemeroptera individuals in only eight out of nine sampling sites is due to the different habitats and habitat qualities encountered during this research along the Mureș River. Some of the sites where sediment was sampled were not populated with individuals from the Trichoptera (M7 site, Figure 1) or Ephemeroptera (M14 site, Figure 1) orders or the populations were not developed enough for a representative sample size.
Mirex was not directly used in Romania which is why we did not find its presence in sediment or benthos samples, and we could argue that the trans-boundary contamination with mirex is low in Romania.
The Spearman rank correlation results come as no surprise for the situation as few sites are compared, and between these sites, only some have concentrations of POPs in all three sampling categories investigated (sediment, Trichoptera larvae, and Ephemeroptera larvae). The ratio analysis showed (Figure 4) that there are too few samples that are contaminated with all three compounds of interest that could be used in a reliable test. Contrary to these results, the frequency of detection of ΣDDT compounds shows a consistent decreasing trend from p,p’-DDE to p,p’-DDE that characterizes all of the sample types. In the case of ΣPCB, the decreasing trend starts with PCB28 for all the investigated sample types and is similar between them while a similar situation is brought forth from the analysis of ΣHCH isomers which shows that β-HCH is most commonly found with a higher frequency than the rest (when not of equal frequency). From these last observations, we can propose that the contamination of sediment, Trichoptera, and Ephemeroptera samples is consistent with a single source of pollution, which could very well be the sediment that is considered by many as a reservoir for POPs [24,27].
The similar frequency of detection for the different compounds of DDT between sample types is an indication that there is no metabolization of a specific compound to the detriment of others and that if there is metabolization, it probably happens at a proportional rate to what is happening in the sediment samples. Another possibility could be due to a combination of the latter with a different bioaccumulation pattern of the investigated POPs which could very well be the situation for ΣPCB and ΣHCH in which the frequency of detection varies. When comparing the frequency of detection with the median concentrations, we see that the pollution with DDT in sediment shows recent contamination (higher concentration of p,p’-DDT) while the median concentrations for benthos samples show contamination which is not so recent (higher concentration of p,p’-DDE). This could be due to the recent sediment contamination which the benthos samples have not had time to bioaccumulate. Another possibility is that the benthos invertebrates (or lower trophic levels) break down DDT and become the source for metabolites in higher trophic levels [80]. This furthers the notion that there is a need for biomonitoring groups and that the analysis of sediment is still necessary and complementary to benthos [32,57].
One reason that the Trichoptera samples do not have a significantly higher concentration than the sediment samples could be the fact that some Trichoptera larvae create small houses that protect them from the surrounding sediment which could inhibit the capacity of bioaccumulation through direct contact [81]. The fact that the concentration of POPs is higher in the Ephemeroptera samples than in the sediment samples (Figure 1) coupled with the higher frequency of detection (Table 1) in both the Trichoptera and Ephemeroptera samples makes the latter group a better candidate for further analysis in determining the environment’s POP contamination.
Our results support the idea of using Trichoptera and especially Ephemeroptera samples for biomonitoring purposes. Using benthos samples is usually a better decision than using other animals such as some fish because invertebrate larvae have restricted mobility [82] and are thus capable of better representing the study area. The use of invertebrate samples for biomonitoring has been proposed in the past for Laeonereis culveri in estuarine environments [83] and for benthos samples separated in FFGs [50]; therefore, we consider that the benthos samples we analyzed in this study are suitable for determining the contamination of POPs in the lotic environment.
In completion of many classification systems of monitoring parameters that are used in European countries, but not only, and up-to-date more uniform and continual classification proposals [84], we suggest the possibility of use of the sediment and Ephemeroptera and Trichoptera complex in pre-alert assessing and monitoring of the presence and level of the highly toxic POPs (OCPs and PCBs) in aquatic ecosystems.

In this study, we determined that the benthos samples have higher concentrations of POPs (OCPs and PCBs) than sediment samples. This, along with the fact that the frequency of detection for POPs is similar between the sample types makes the sediment–Ephemeroptera–Trichoptera (SET) complex a suitable indicator of habitat contamination. The relatively short-medium-term gradient of pollution with POPs can be identified due to sediment and Ephemeroptera and Trichoptera assessment and monitoring, based on their short to medium to longer time of pollutant adsorption in sediments and bioaccumulation in Ephemeroptera and Trichoptera. This SET complex can be used to rapidly determine the appearance and longer time monitoring presence and concentration of POPs before they have time to bioaccumulate in edible organisms such as fish. Consequently, fish that live more than two years can be used in this respect as a much longer-term pollution indicator [36]. Therefore, the SET complex can constitute a pre-alert and alert group of indicators that reveal the presence and levels of POPs in aquatic systems before there is a threat to human food resources and to humans themselves.
Finally, it can be highlighted that the fact that the trophic niches created by these benthic organisms represent a compartment with an active functional-transfer role of POPs between the abiotic and higher-level trophic compartments ending on the human plates, the insect larvae representing, due to their relatively high biomass and turn-over, a very important taxonomic group for POP circulation in nature, together with sediments at an initial point and fish at the end of such analysis.

This research was funded by EEA Norway Grants and RO04 (SEE) funders of the ID 66243 SIDPOP project.

Ethical review and approval were waived for this study, since the biological material was formed by invertebrates. More than that these invertebrates are common, highly abundant in the environment, and of no national or international conservation value. Also, it must be added that no invertebrates were collected from protected areas.

This study did not involved humans. 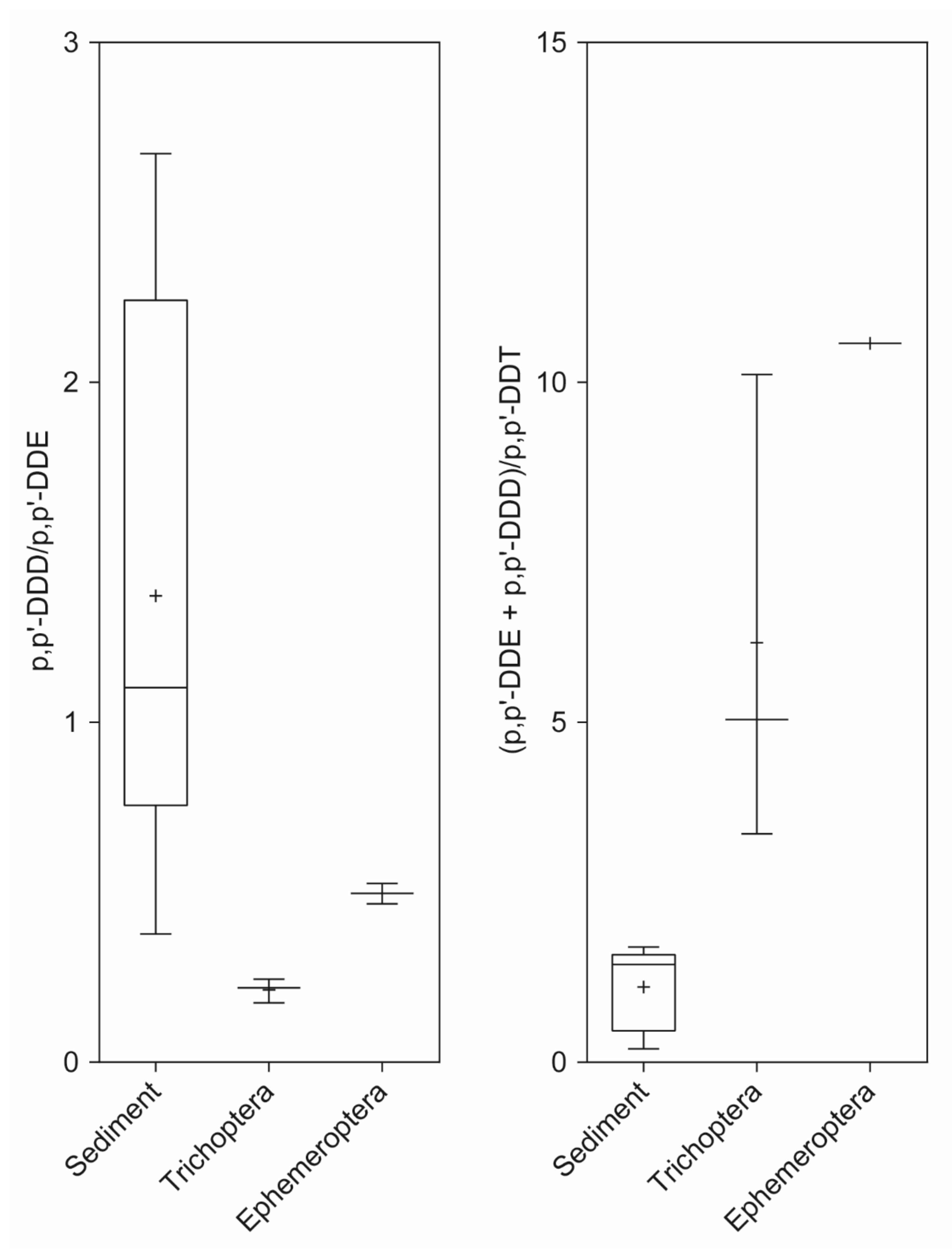