Temporal and Spatial Distribution of Microplastics in a Coastal Region of the Pearl River Estuary, China
Previous Article in Journal

Low-velocity, shallow water riparian zones in large rivers are productive habitats supporting primary and secondary production for many aquatic organisms [1,2,3]. Many fishes use vegetated riparian zones as spawning and sheltered nursery habitats [4,5,6,7,8]. Additionally, these low-velocity areas often retain zooplankton prey for larval and juvenile fishes, providing more efficient foraging opportunities for early life stages than in swifter main-channel habitats [2,9]. Riparian areas also provide societal and economic services that can interfere with natural ecological processes. Riverine modifications to support navigation and shoreline development have contributed to losses of many shallow water riparian areas in large rivers [10,11,12]. The St. Clair–Detroit River System (SCDRS) on the Canada–United States (U.S.) border is a unique system that shares a common history of habitat degradation with many large rivers worldwide. As a connecting channel of the Laurentian Great Lakes, the SCDRS has a relatively consistent discharge and lacks a floodplain [13,14]. However, like most of the world’s large rivers, the SCDRS was altered to better accommodate transportation, trade, and development. Channels were re-routed and deepened in the early 1900s to facilitate navigation of deep-draft vessels, removing over 46 million m3 of substrate and burying over 4050 ha of fish spawning habitat with dredged spoils [15]. Through this process, shallow water areas were converted to deep shipping channels and artificial islands. Industrial and residential development along the SCDRS further altered the riparian zone. Wetlands were in-filled and shallow sloping banks were converted to deep, vertical banks to allow boats direct access to loading docks and marinas [14,16]. Shorelines were hardened with an estimated 55% of U.S. mainland shoreline on the Detroit River converted to steel sheet piling or concrete breakwater by 1985 [17]. The cumulative result of these alterations was a loss of approximately 97% of riparian wetlands in the Detroit River [18]. Although the St. Clair River still features a river delta marsh, wetland losses in the delta from 1868–1873 to 1973 were estimated as 68% (Jaworski and Raphael 1976 as cited in [19]).
Declines and impairments of habitat and fish and wildlife populations were contributors leading to the St. Clair and Detroit rivers’ designations as Great Lakes Areas of Concern (AOC) in 1987 [18,20]. In 1987, fish populations were not designated as impaired based on reports of a rich fish community (>60 species in Detroit River; [21]); however, recognition of the linkage of negative impacts of large-scale habitat degradation on fish and wildlife populations contributed to eventual listing as a beneficial use impairment (BUI, see [20] for definition) [22]. Consequently, although Francis et al. [19] noted 63 and 56 fish species in nearshore habitats of the Detroit River (sampled in 2004, 2006, and 2008) and the St. Clair River Delta (sampled in 2007), respectively, carrying capacity of the system has likely changed and fish communities differ from pre-colonial times [23]. Work in the Detroit River supported that uncommon and imperiled fishes (e.g., pugnose minnow Opsopoeodus emiliae and spotted sucker Minytrema melanops) were found in areas with wetland habitats, whereas upstream habitats featured few uncommon species and more non-native fishes [7]. In 1991, resource managers identified increasing or improving wetland habitats as a way to improve conditions in the Detroit River [23]. Previous research has shown that riparian and shoreline habitat enhancement projects benefit larval and juvenile fishes by supporting greater fish densities, feeding, and growth [24,25]. Additional information on fish community–habitat associations could help guide riparian and shoreline habitat enhancement projects to maximize benefits and assess potential non-target effects to at-risk or undesirable species.
Establishing an ecological baseline that identifies attributes and processes supporting functional riparian habitat is an important first step for rehabilitation efforts [26,27] and was the impetus for this study. Development and implementation of restoration projects guided by key habitat attributes and processes can lead to achievement and maintenance of desirable restoration outcomes, such as higher richness of small-bodied and juvenile fishes. Additionally, establishing a baseline facilitates development of tangible (achievable and measurable) objectives and provides a starting point to gauge the effectiveness of restoration projects [28]. Further, jurisdictional wildlife action plans have specified a need to understand habitat use of at-risk fishes [29]. Therefore, the objectives of this study were to assess shallow water riparian fish communities in the SCDRS and identify habitat attributes associated with fish species richness based on a shoreline seine survey conducted from 2013 to 2019. Further, we examined habitat associations of commonly collected species to inform targeted restoration projects to meet management goals for individual species of interest, as well as the entire fish community.

The SCDRS is a 148 km international waterway connecting Lake Huron and Lake Erie in the southern portion of the Michigan, USA–Ontario, Canada border (Figure 1). The system is composed of three distinct parts, the St. Clair River, Lake St. Clair, and the Detroit River, and is the only Laurentian Great Lakes connecting channel with unregulated flow [14,30]. Lake Huron is the primary water supply to the system and acts as a large reservoir, stabilizing flows and minimizing fluctuations in discharge. Consequently, the system maintains a relatively constant discharge of 5300 m3/s [13] and consistent water velocities [31]. Water depths in both the St. Clair and Detroit rivers are variable, with depths reaching 27 m and shipping channel depths maintained at a 10 m minimum [15,32]. However, water levels have increased by approximately 1 m over the study period (Figure 2). The St. Clair River is generally narrower and faster than the Detroit River, maintaining a single channel before forming a large delta at the transition to Lake St. Clair. Lake St. Clair empties into the Detroit River, which forms multiple channels in the lower half of the river before flowing into Lake Erie. The shallow waters and large surface area of Lake St. Clair allow water entering the Detroit River to warm and cool more quickly in the spring and fall than in the St. Clair River, where water temperature is more similar to Lake Huron [14,33].

Scientists from U.S. Geological Survey (USGS) Great Lakes Science Center (Ann Arbor, MI, USA) sampled ten sites with seines along the SCDRS Michigan shoreline (Figure 1) from 2013 to 2019, although two of the sites were not sampled in 2013: S-009 (Detroit River) and S-002 (St. Clair River). Sampling was conducted in August or September (15 August–13 September) of each year using a 9.14 × 1.83 m bag seine with 1.6 mm delta nylon mesh. Scientists pulled the seine against the current for 15.25 m when the ends were brought together and all fish were gathered in the bag end. Scientists identified most fish on site and released them downstream of the sampling site, whereas some fishes were retained as reference specimens. Individuals not identified in the field were fixed in a 10% formalin solution and identified in a laboratory setting. Generally, scientists sampled up to five hauls at each site, although limited availability of wadable water without obstructions prevented five hauls of 15.25 m at some sites within a given year (Table 1). Eight seine hauls were completed at S-001 (St. Clair River) in 2019. Due to high water levels, scientists were unable to sample at the S-006 site in the St. Clair River Delta in 2019.
To understand fish community associations with habitat variables and inform potential habitat enhancement projects, we focused analyses on habitat variables that could be manipulated to achieve management objectives. Habitat metrics were documented at all sites and included the presence/absence of in-river substrates, dominant shoreline substrate type, dominant shoreline vegetation type, and aquatic macrophyte species richness and percent cover. Inorganic substrates were classified based on the Wentworth scale [34] with organic substrates (e.g., detritus) and algae also included. Shoreline vegetation was classified as grassy, woody, or absent, based on the dominant vegetation type. In some instances, shoreline vegetation was “mixed”, with areas lacking shoreline vegetation and restored areas comprised of grassy vegetation. Scientists visually estimated the percent cover of aquatic macrophytes for the entire area seined, then raked aquatic macrophytes along transects through the seined area to uproot and collect plants. All unique macrophyte species collected were identified in the laboratory based on descriptions by Crow et al. [35,36].

The following are available online at https://www.mdpi.com/article/10.3390/w13121616/s1, Table S1: Number of each fish species collected during a shoreline seine survey at sites in the St. Clair-Detroit River System 2013–2019. Table S2: Model selection results and model-averaged slope parameter estimates based on 256 candidate generalized linear mixed models to understand habitat associations of 33 fishes in the St. Clair and Detroit rivers based on a shoreline seine survey from 10 sites sampled 2013–2019. Column headings are predictor variables.

This work was supported by the Great Lakes Restoration Initiative.

All sampling and handling of fish during research are carried out in accordance with guidelines for the care and use of fishes by the American Fisheries Society (http://fisheries.org/docs/wp/Guidelines-for-Use-of-Fishes.pdf) [accessed on 6 June 2021]).

Data are available from the US Geological Survey online repository, ScienceBase: https://doi.org/10.5066/P9XID1TO (accessed on 6 June 2021).

Ethan Acromite, James Beaubien, Cody Bourgeois, Dustin Bowser, Dana Castle, Emily Galassini, Rob Hunter, Stacey Ireland, Scott Jackson, Dylan Jones, Brok Lamorandier, Payton Murray, Ellen O’Neil, Andrew Pawloski, Jeremy Pritt, Stacy Provo, Hailey Schroeder, Samantha Strandmark, Jenny Sutherland, Patricia Thompson, Paige Wigren, and Nathan Williams assisted with data collection. Song Qian provided guidance on analytical approaches during development of an earlier version of this research. Additionally, Andrew Briggs, Alejandro Molina-Moctezuma, and three anonymous reviewers provided constructive reviews that helped improve the quality of the manuscript. The findings and conclusions in this article are those of the authors and do not necessarily represent the views of the U.S. Fish and Wildlife Service. All sampling and handling of fish during research are carried out in accordance with guidelines for the care and use of fishes by the American Fisheries Society (Guidelines for Use of Fishes in Research. Available online http://fisheries.org/docs/wp/Guidelines-for-Use-of-Fishes.pdf [accessed on 6 June 2021]). Any use of trade, product, or firm names is for descriptive purposes and does not imply endorsement by the U.S. Government. 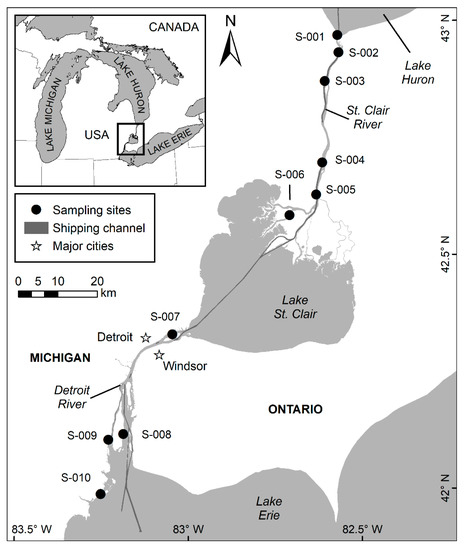 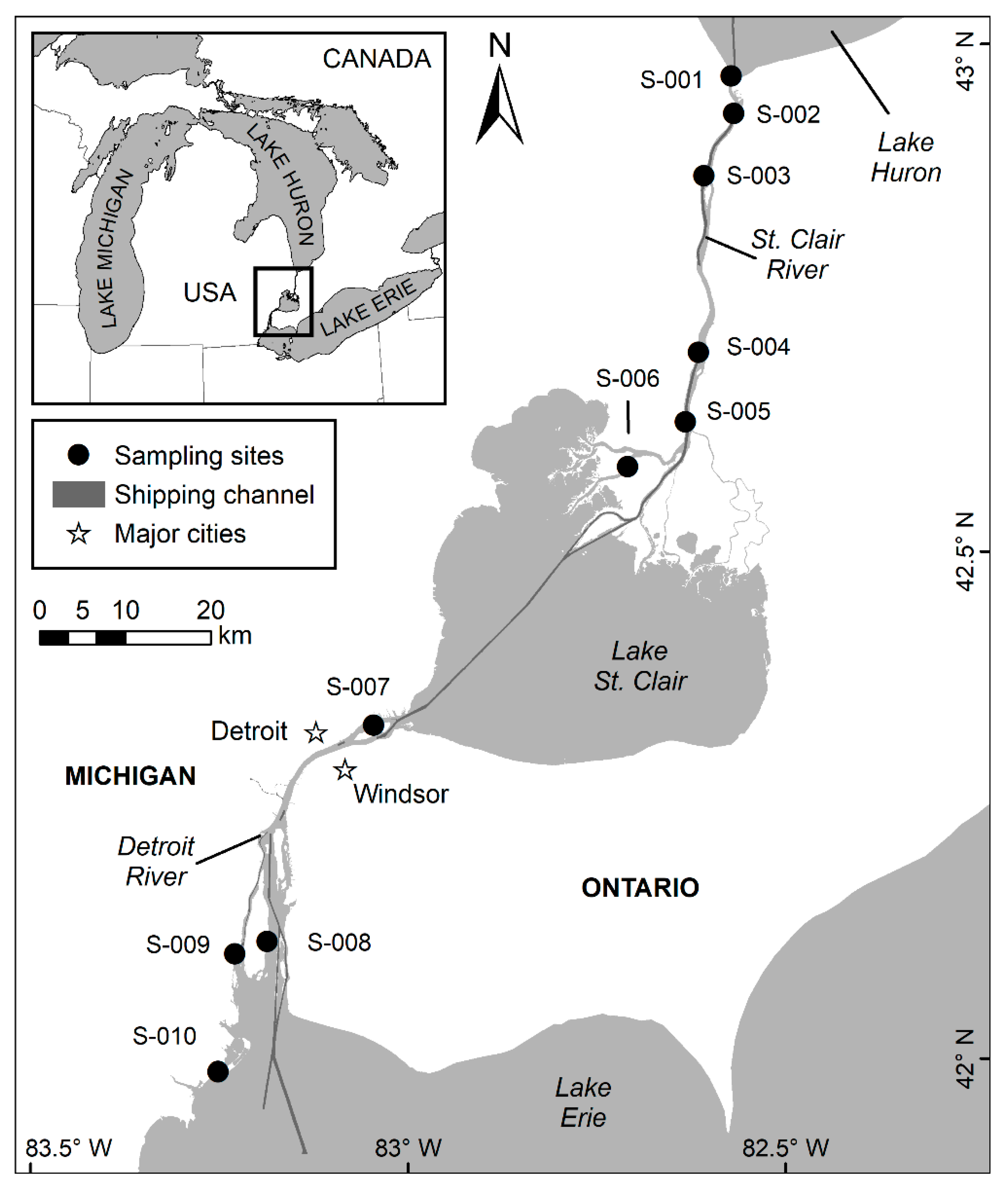 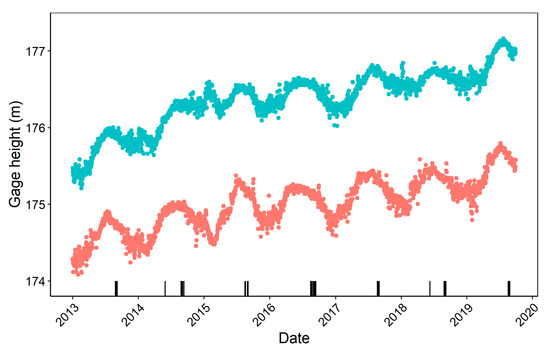 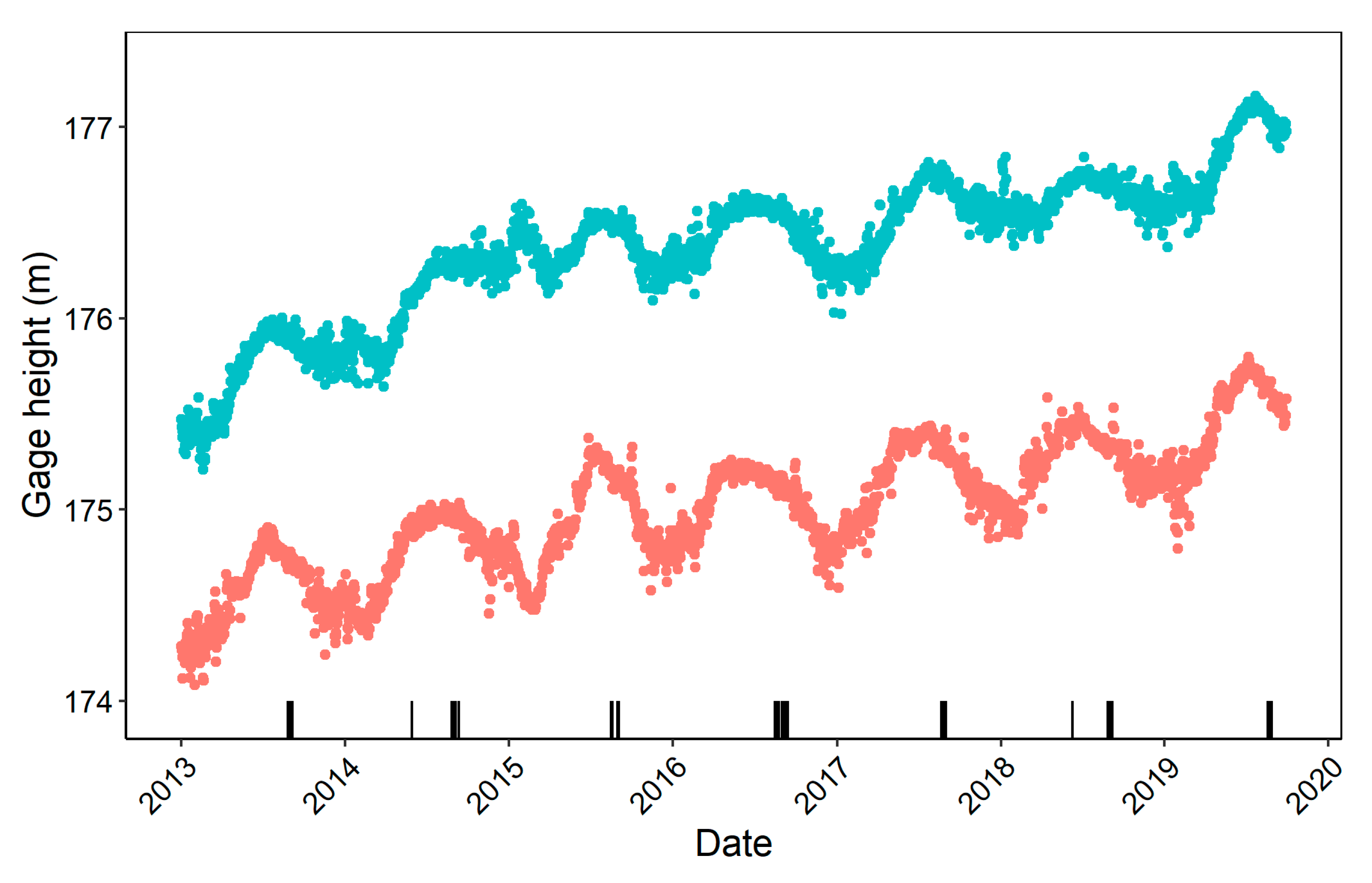 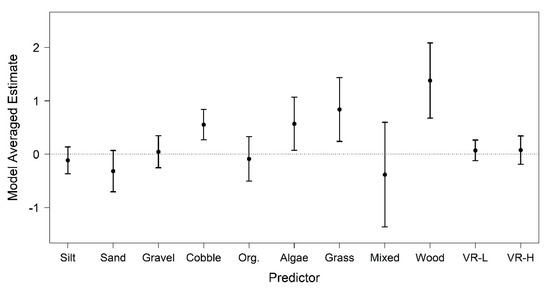 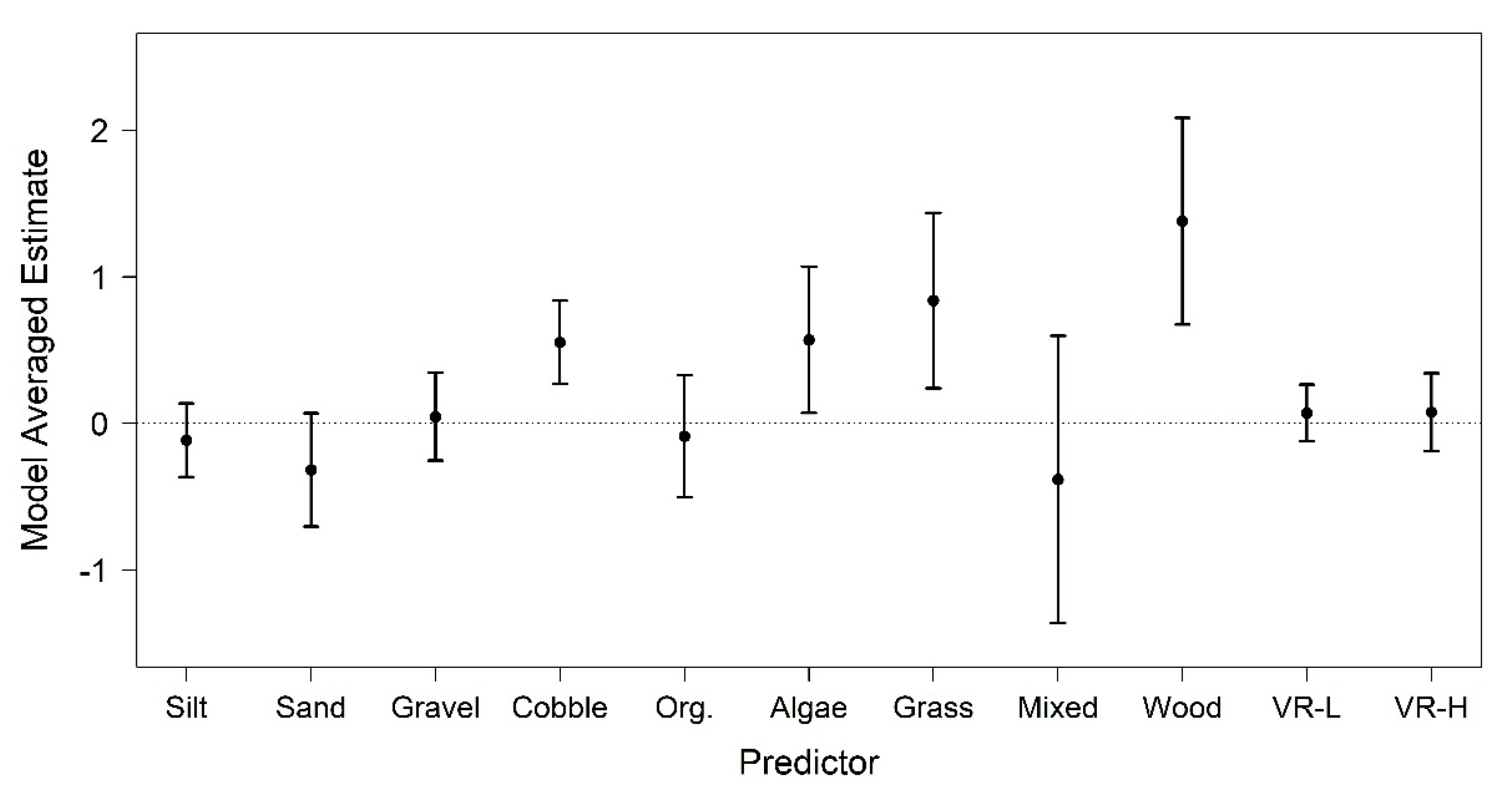 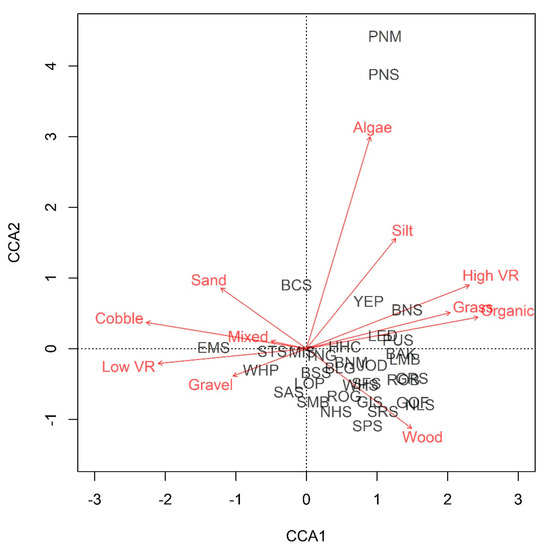 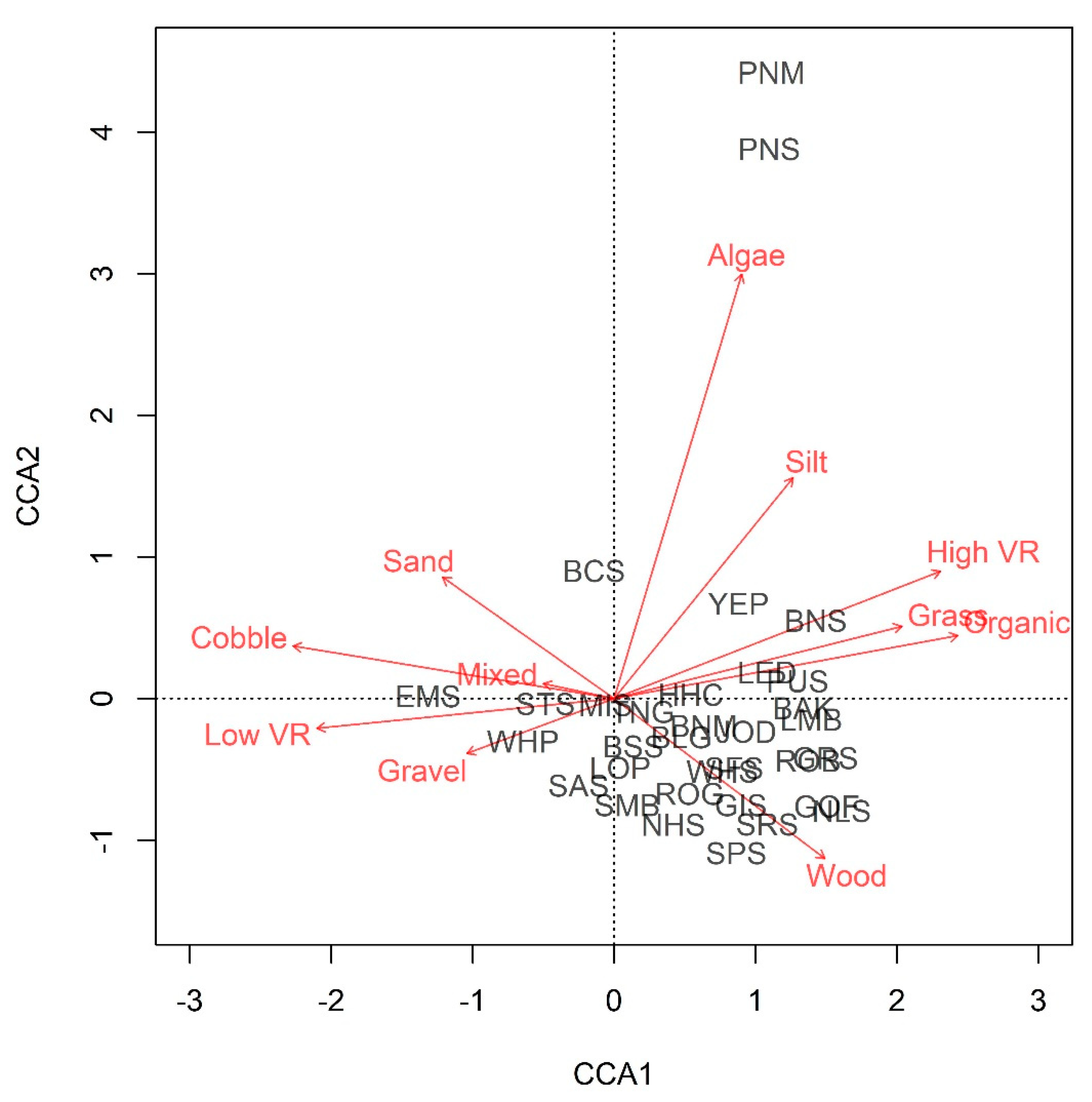