Differentiated Effects of Urbanization on Precipitation in South China

In this study, the SWAT hydrological model was used to estimate the sediment yields in the principal drainage basins of the Congo River Basin. The model was run for the 2000–2012 period and calibrated using measured values obtained at the basins principal gauging station that controls 98% of the basin area. Sediment yield rates of 4.01, 5.91, 7.88 and 8.68 t km−2 yr−1 were estimated for the areas upstream of the Ubangi at Bangui, Sangha at Ouesso, Lualaba at Kisangani, and Kasai at Kuto-Moke, respectively—the first three of which supply the Cuvette Centrale. The loads contributed into the Cuvette Centrale by eight tributaries were estimated to be worth 0.04, 0.07, 0.09, 0.18, 0.94, 1.50, 1.60, and 26.98 × 106 t yr−1 from the Likouala Mossaka at Makoua, Likouala aux Herbes at Botouali, Kouyou at Linnegue, Alima at Tchikapika, Sangha at Ouesso, Ubangi at Mongoumba, Ruki at Bokuma and Congo at Mbandaka, respectively. The upper Congo supplies up to 85% of the fluxes in the Cuvette Centrale, with the Ubangi and the Ruki contributing approximately 5% each. The Cuvette Centrale acts like a big sink trapping up to 23 megatons of sediment produced upstream (75%) annually. View Full-Text
Keywords: Congo River Basin; Cuvette Centrale; erosion; sediment transport; sediment balance; SWAT Congo River Basin; Cuvette Centrale; erosion; sediment transport; sediment balance; SWAT
►▼ Show Figures 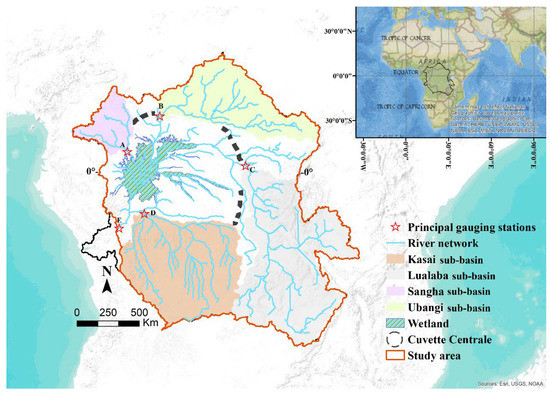