Endocrine-Disrupting Compounds: An Overview on Their Occurrence in the Aquatic Environment and Human Exposure
Previous Article in Journal

Although multiple herbicide exposures are more prospective to occur in water, many previous studies were carried out as single herbicide exposure. To investigate the toxic effect of prometryn on cyanobacteria and water qualities, single and double prometryn exposures (at different growth phases) on Microcystis aeruginosa growth and concentrations of nutrients were compared after a 44-day experiment. Results indicated that under single exposure, maximum inhibition rates were 4.7–12.0% higher than those under double exposures. Correspondingly, the maximum Microcystis aeruginosa densities and growth rates under single exposure were 10.3–21.1% and 19.5–37.7% lower than those under double exposures (p < 0.05), respectively. These findings revealed that repeated prometryn exposures resulted in a reduction in biological effects, because the time of application and the concentration injected during the first application were both significant factors in the biological effects of prometryn. Prometryn exposure scenarios did not have a significant effect on nutrient or nutrient consumption concentrations (p > 0.05). In general, the pattern of nutrient limitation showed a shift from phosphorus to nitrogen limitation. The quantified relationships between Microcystis aeruginosa growth rates and consumed nutrients were studied. Based on the above findings, we believe that a high-dose and single prometryn exposure is a more effective exposure pattern for limiting cyanobacteria growth. View Full-Text
Keywords: herbicide; exposure scenarios; cyanobacteria; water environment; equations herbicide; exposure scenarios; cyanobacteria; water environment; equations
►▼ Show Figures 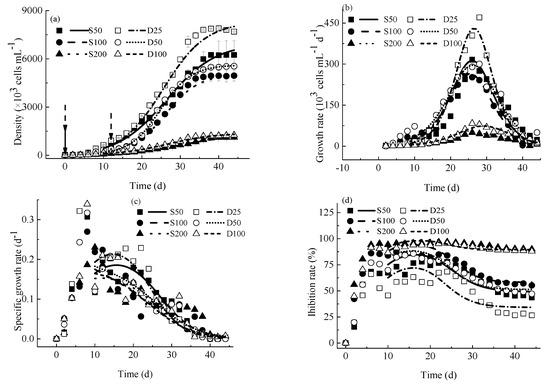