The Establishment and Rapid Spread of Sagittaria Platyphylla in South Africa

Two Ocean Pass: An Alternative Hypothesis for the Invasion of Yellowstone Lake by Lake Trout, and Implications for Future Invasions

Preventing the interbasin transfer of aquatic invasive species is a high priority for natural resource managers. Such transfers can be made by humans or can occur by dispersal through connected waterways. A natural surface water connection between the Atlantic and Pacific drainages in North America exists at Two Ocean Pass south of Yellowstone National Park. Yellowstone cutthroat trout Oncorhynchus clarkii bouvieri used this route to cross the Continental Divide and colonize the Yellowstone River from ancestral sources in the Snake River following glacial recession 14,000 bp. Nonnative lake trout Salvelinus namaycush were stocked into lakes in the Snake River headwaters in 1890 and quickly dispersed downstream. Lake trout were discovered in Yellowstone Lake in 1994 and were assumed to have been illegally introduced. Recently, lake trout have demonstrated their ability to move widely through river systems and invade headwater lakes in Glacier National Park. Our objective was to determine if lake trout and other nonnative fish were present in the connected waters near Two Ocean Pass and could thereby colonize the Yellowstone River basin in the past or future. We used environmental DNA (eDNA), electrofishing, and angling to survey for lake trout and other fishes. Yellowstone cutthroat trout were detected at nearly all sites on both sides of the Continental Divide. Lake trout and invasive brook trout S. fontinalis were detected in Pacific Creek near its confluence with the Snake River. We conclude that invasive movements by lake trout from the Snake River over Two Ocean Pass may have resulted in their colonization of Yellowstone Lake. Moreover, Yellowstone Lake may be vulnerable to additional invasions because several other nonnative fish inhabit the upper Snake River. In the future, eDNA collected across smaller spatial intervals in Pacific Creek during flow conditions more conducive to lake trout movement may provide further insight into the extent of non-native fish invasions in this stream. View Full-Text
Keywords: cutthroat trout; environmental DNA; invasion risk; nonnative fish; Salvelinus; Snake River; national park; wilderness pathway cutthroat trout; environmental DNA; invasion risk; nonnative fish; Salvelinus; Snake River; national park; wilderness pathway
►▼ Show Figures 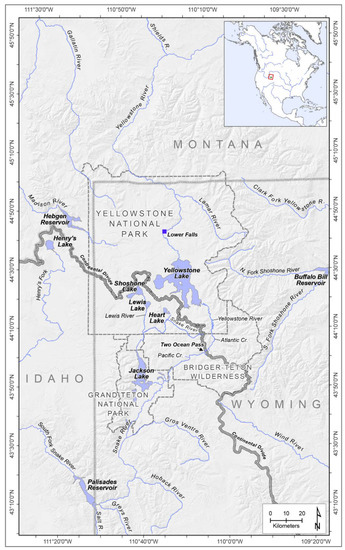