A Performance Prediction Model for Pumps as Turbines (PATs)

Sewage systems play a crucial role in the framework of the water resources cycle. The detection of the causes and typologies of their malfunction is essential not only for guaranteeing correct hydraulic management of the network but also because it can prevent environmental contamination. In this study, a reconnaissance on the typologies and causes of intervention in sewer networks located in three Apulian provinces (Southern Italy) was carried out. The results showed that pipe occlusions with exfiltration are the main cause of intervention, followed by manhole occlusions. Data about pipe material highlighted that stoneware is absolutely the most used material and also the main object of maintenance for obstructions and breakages. Its correlation with the density of inhabitants was also investigated. The absence of detailed information about the age of any single pipe does not permit us to exclude the aging of pipes as a cause of major intervention. However, the frequency of some interventions in the same towns and often on the same trunks of pipes leads to the belief that criticalities occurring in the network could be addressed to incorrect use or bad hydraulic functioning.
Keywords: sewage; wastewater; leakages; pipes sewage; wastewater; leakages; pipes

Acquedotto Pugliese S.p.A. (AQP in the following lines), the Apulian water management company, manages today 575 sewage systems for approximately 12,000 km of pipelines, which are intended to collect and move away wastewater from inhabited centers. According to the company’s territorial organization, the Puglia region is divided into 14 areas, which were turned into agglomerations after the European Directive (91/271/EEC). Based on these premises, the present study was carried out, in collaboration with AQP, to identify the real criticality of these sewer systems and suggest measures to improve the systems’ performances.
The authors retrieved and analyzed the available data from the maintenance journal of AQP for 2017 and 2018 concerning the provinces of Taranto, Lecce, and Brindisi (Figure 1). These provinces contain 144 towns and their districts, for a total of 193; 1,740,834 inhabitants are subdivided, as indicated in Table 1. From an operational point of view, these towns are managed in seven agglomerations, as indicated in Table 1 and shown by Figure 2, for a total sewage length of about 6751 km. The analysis regarded a total number of interventions equal to 24,030 in 2017 and 27,115 in 2018, subdivided into the analyzed provinces as summarized in Table 1.

3. Typology of Data and Methodology

Due to a large number of recorded requests—in many cases not well documented—we focused our attention only on calls that resulted in an effective intervention by the AQP and which in most cases led to detect leakage and substantial sewage exfiltration. Among the extracted data, only those relating to the sewer system were taken into consideration, thus excluding the interventions that involved only the service (self-purging) of disinfestation, the presence of bad smells, and a request for site inspection, and not real intervention (excavations or similar).
The selected records were cataloged in the following categories of disservice, reported as originally annotated by operators according to the Journal of Maintenance format:
In addition to this type-based classification, disservices were also subdivided according to their causes, which can be summed up as:
Table 2 summarizes the number of disservices requiring a real intervention for the two years above indicated; the data highlight that real leakages are half of the total registered calls received by AQP S.p.A.
Based on these categories and causes, the frequency of sewer disservice was analyzed and correlated with large scale indicators, as discussed in the following section. For this purpose, we evaluated for each town and agglomeration across the total length of the network, the number of inhabitants, and the Equivalent Inhabitants (I.E.), which accounts for all types of urban water consumption including real population, public institutions/facilities, economic activities, etc. To take into account the age of the pipes, we recovered information about the years of construction of the networks from other sources because this information is not reported in the journal. Analogously, we referred to general information about the type of material (concrete and brick pipes, stoneware, plastic pipes) consistently with the years of construction of the networks.

A Local Focus: The Town of Carovigno

Data registered during the above-mentioned two years revealed that quite often several interventions recorded occurred in the same pipes, thus highlighting the existence of criticalities in some sewage pipes.
This section presents a town dataset analyzed in more detail—the sewer network of Carovigno, one of the towns that has shown a higher percentage of interventions during the two years of observation. The aim was to observe how the sewer leakages were distributed along the sewer system and the probable causes that could explain them.
The town of Carovigno has approximately 17,000 inhabitants and is situated 30 km north-west of Brindisi (Figure 2), 7 km from the Adriatic Sea and 8 km from Ostuni, the well-known Apulian White Town. Carovigno has a smooth hilly landscape with medium slopes of 3%.
A sketch of the separate sewer network of Carovigno is represented in Figure 6. The network, whose description comes from a dataset other than the maintenance journal, has a total length of about 30 kilometers. The main diameter is 200 mm and the material is stoneware.
The network presents three pumping stations. Two of them are placed in and serve some depressed areas of the urban center and a third one is placed at the network outlet and pumps water to the wastewater treatment plant. Except for these singular points, the sewer system is characterized by gravity flow. The intervention positions in Figure 7 and Figure 8 were deducted manually from the Journal of Maintenance thanks to the address information recorded by the operators. Starting from the total number of interventions requested, only the disservices indicated in Section 2 have been mapped in the analysis for a total number of 73 interventions for 2017 and 130 for 2018.
Figure 7 and Figure 8 highlight how the exfiltration is mainly due to obstructions, except for a negligible number of ruptures. Figure 7 shows a large number of manhole and pipe occlusions that occurred from more than one to nine times. The diameters affected by the losses are almost all 200 mm.
An important aspect is related to the type of sewer pipes involved, which are frequently lateral and sub-main sewers.
The number of breaks (pipes or manholes) at this scale of analysis is very small for providing indications without further local information.

The issue of sewage leakage appears to be quite real and of considerable interest in the scientific field. In particular, its environmental and management repercussions make it a central topic in technical literature. The absence of extended data and contextual in-depth studies on the topic does not allow us to know with certainty the variables that directly contribute to influencing the number of losses that are recorded in a sewer system.
This paper exploits the availability of the data from the maintenance journal of the AQP in the period 2017–2018 for the provinces of Taranto, Lecce, and Brindisi. Despite the available data covering only a short period, the extension of the sewer network, approximately 6700 km, provides a useful reference to highlight aspects of its critical issues.
In particular, interesting observations on the capacity of a few large-scale indicators, accounting for the extension of the sewage system and its usage stress, were provided.
The absence of detailed information on the age of any single pipe subjected to effective intervention does not permit us to completely exclude aging as a factor in causing the high frequency of exfiltration due to both obstructions and rupture. Nevertheless, we observed that most of the interventions were related to the same towns for both of the two years of maintenance data. While no specific information about the age of singular pipes is available, accounting for local intervention, AQP reported that all of these sewage systems were originally built in the same historical period. Therefore, a greater frequency of intervention could be due to factors related to possible bad hydraulic function and incorrect user habits. The comparable number of obstructions and breakages in different towns reinforces these conclusions, in addition to the repetition of many interventions in the same pipes in the two years of investigation and also the high frequency of interventions in the pipes of small or medium towns that were not different in terms of the year of construction.
The technical literature [13,30] suggests preventive and programmed maintenance scheduled based on specific criteria, such as known problems or frequent intervention requests. Our analysis demonstrated that the sewage systems of AQP could be improved with actions helping the hydraulic functionality and reducing faults and inconvenience to the users (e.g., sewage cleaning).
It is relevant that the most frequent causes of interventions were “ordinary” causes and improper use, which are factors not related to the age or material of the pipes. These could be rather addressed to the installation modality (e.g., very small slope or siphon trunk) or related to social habits that entail an incorrect use of the sewage system (the introduction of solid objects into the pipe, like kitchen remains, nappies, pads, rags).
We observed that one of the most important parts of a preventive maintenance program is the systematic and frequent cleaning of sewers. Starting from this consideration and collecting intervention data on any specific case (such as that shown for Carovigno), the water management company can define a list of critical pipes that need more frequent cleaning operations. A similar approach can be adopted when it is impossible to conduct an inspection survey of the sewer network, and may help to define how often a part of the sewer system should be cleaned. Whereas manhole inspection is quite easy, the same cannot be said for pipes, where television inspection permits us to identify obstructions, roots, or other causes. In this way, the costs for CCTV can be reduced and limited to situations where the cause of the obstruction needs to be cleared. The costs of sewer cleaning could be optimized by providing a more frequent hydraulic cleaning of critical pipes and a less frequent one for lateral and sub-main pipes. Nevertheless, if a normal maintenance program requires a cleaning operation every 18–24 months, it will be necessary to increase the frequency of the hydraulic washing of critical pipes to once every 2–3 (maximum 6) months, depending on the obstruction frequency.
Moreover, information about the improper use of the sewerage system suggest the need for social education aimed at improving users’ knowledge about the environmental and sewage works consequences of some habits.
This exploratory analysis of the Journal of Maintainance of AQP reveals that interesting observations can be made when looking at a regional-scale investigation. On the other hand, the subject is worthy of future and more in-depth studies to define a closer correlation between the variables related to the characteristics of the sewer networks at a local scale.

These authors contributed equally to this work. All authors have read and agreed to the published version of the manuscript.

The authors thank AQP for providing technical support and data. 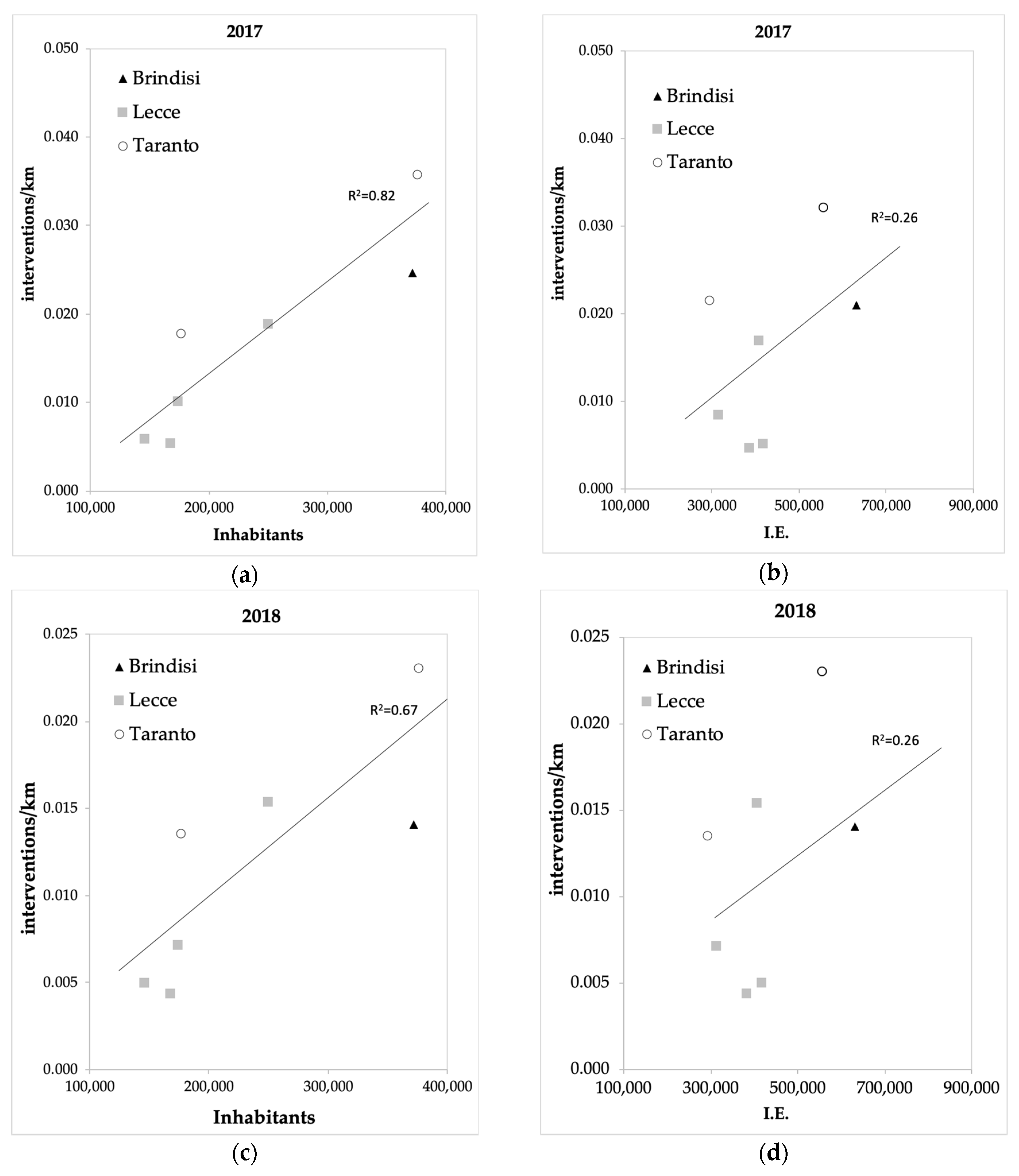 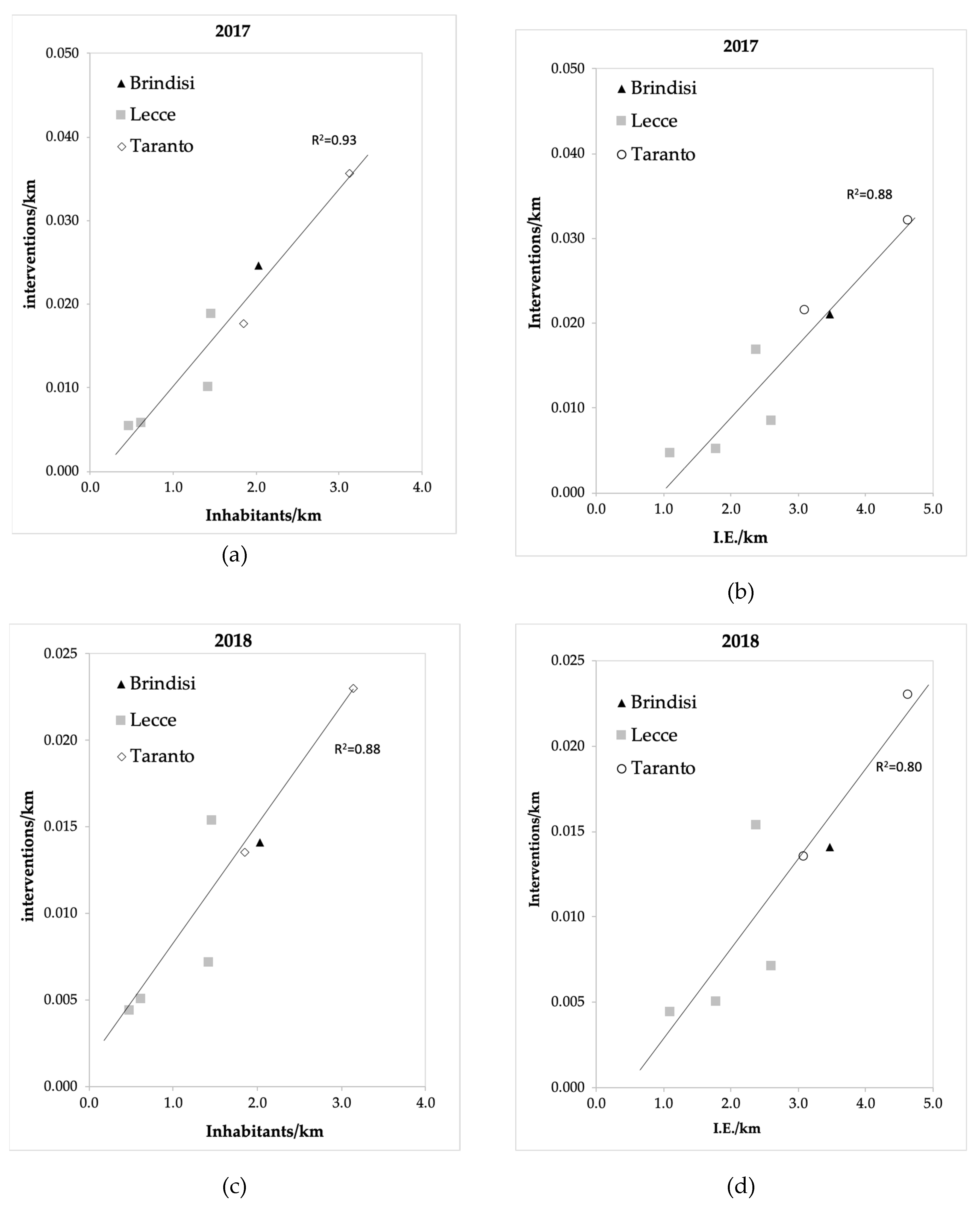 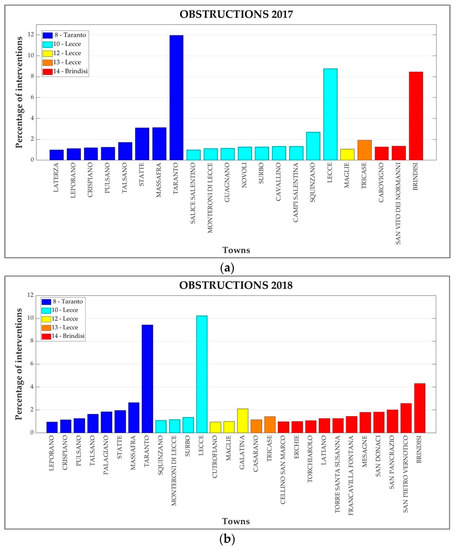 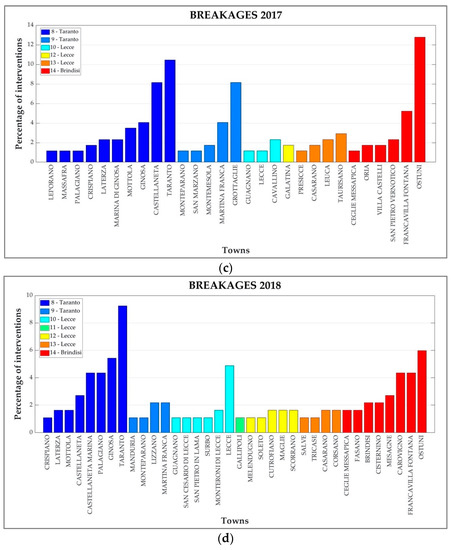 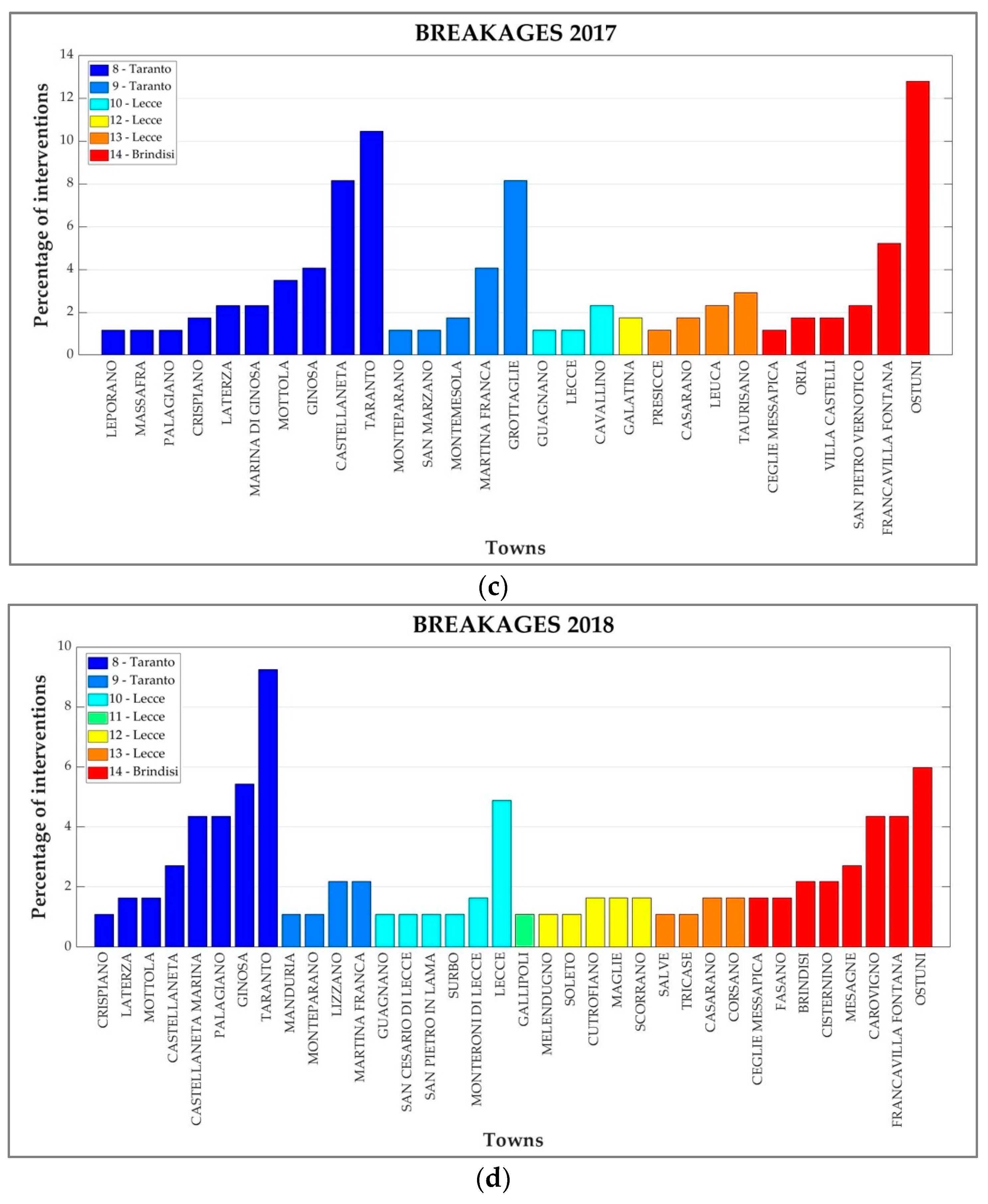 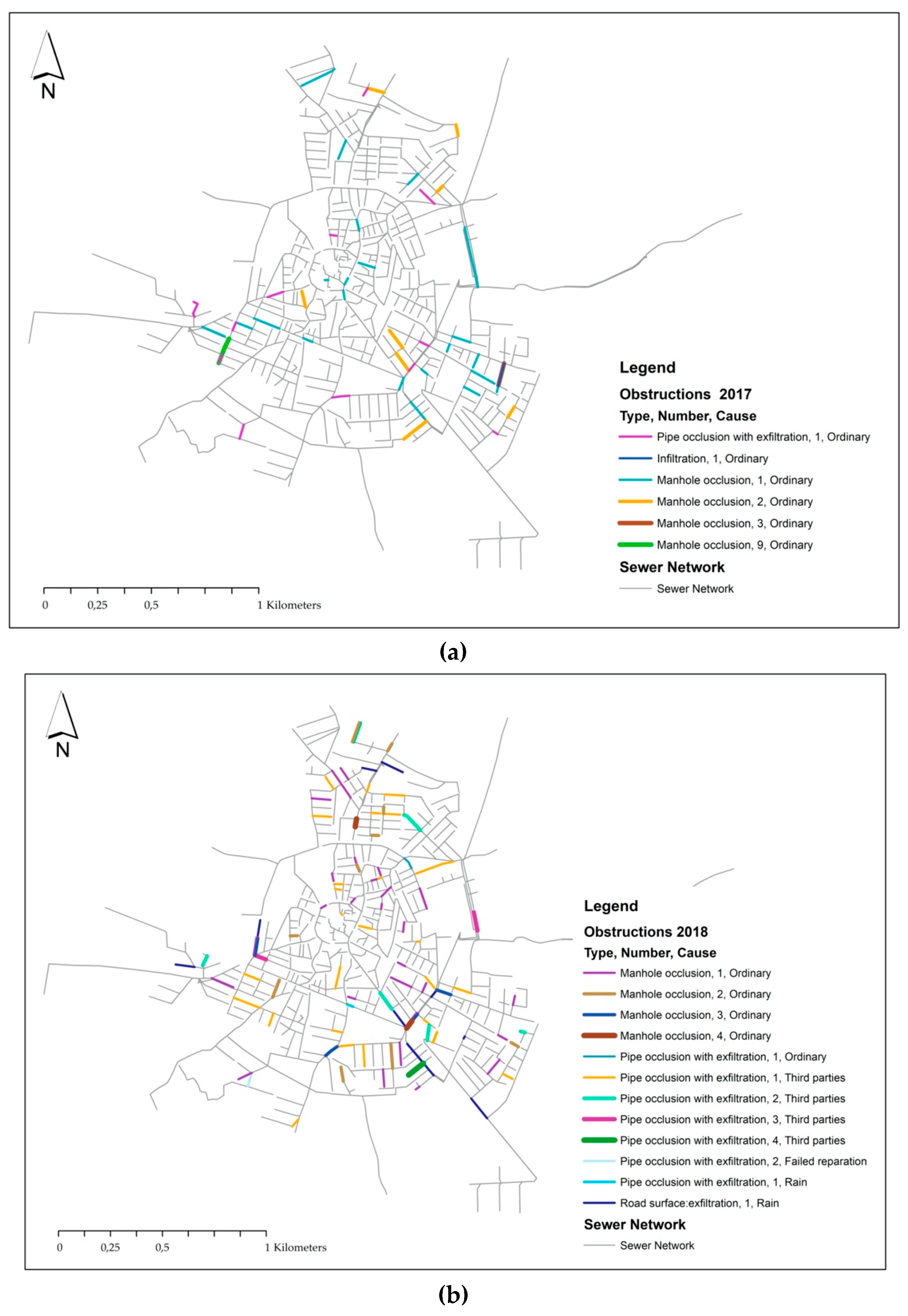