For the analysis of the impact of extreme drought events on water levels and risk assessment of the water security of the dams, data for the dam capacities and specifications, daily water levels, and daily rainfall recorded at each dam were involved. Six major water damns in different regions were observed and analyzed to assess the water level trends and patterns for each dam, along with the rainfall variability across all dam areas to determine the specific drought period events on an individual basis. According to Ahmad et al. [73], the average annual rainfall in Sabah in Northern Borneo is around 2630 mm. The determination of the drought period was conducted using statistical methods for rainfall data to detect unusually low rainfall for the available period of time. From the raw daily rainfall data, monthly rainfall was calculated and the mean monthly rainfall was derived. The individual monthly rainfall values were then compared against the mean to obtain the percentage deviation from the mean, which was then evaluated to identify periods of significantly low rainfall. From there, the drought period was identified. The working definition was devised to overcome the limitations, such as lack of historical data for comparison, as well as lack of a universal standard or threshold for drought. There is a need for better guidelines that are simple, practical, and more functional to determine abnormal drought periods using limited data, such as rainfall data. Therefore, this is the main aim of this research.
It is important to note that the trends are observed based on the specific period of drought occurrences and the short-term changes within the stated timespan for greater accuracy. Previous studies in the literature, such as Odeh et al. [74,75,76] and Mohammed et al. [4], have done extensive work dealing with drought management and dams, mostly focusing on groundwater and long-term impacts, which involved the use of many databases with complex and technical application of conceptual modeling and visualization approaches, such as GIS and remote sensing. On the other hand, these could be the biggest limitations for some regions for which datasets are absent, which lack historical data for long-term analysis and comparison, or which have problems with accessibility relating to the databases and information. In this research, the advantage of using a more targeted and specific drought period for the detection of significant, abnormally low rainfall, and short-term changes on the actual day of the drought event is emphasized. This approach could provide a specific timespan with a well-defined interval that presents the sensitivity of small or even extreme changes in rainfall and the resulting effects on the water dams. This is done to achieve greater accuracy and a more simplified methodology and evaluation, specifically to overcome analysis limitations, such as the lack of a database. At the same time, the research can be seen as more functional in determining the abnormal drought events, especially when using limited data, such as for rainfall. This reveals that many different methodology approaches and frameworks were adopted by other previous authors due to the lack of universal standards and thresholds for drought vulnerability assessment research.
To achieve this, we identify low rainfall periods, for which the percentage deviation from the mean monthly rainfall is calculated for each month at each dam. If the percentage deviation shows a significant negative value (<−50%) or has a negative deviation for 2 months in a row with a cumulative value of <−50%, it can safely be said that these are periods of abnormally low rainfall. These effects will also be taken as cumulative, as even if the rainfall level meets the mean for a particular month immediately following a succession of dry months, it will not be enough to restore the system equilibrium, especially if it is followed by another dry month. Hence, the working definition of drought for this study is an extended period of rainfall or lack thereof (≥2 months) that is significantly lower than the mean (<−50% deviation or cumulative value <−50% for both months). The drought is considered to be finished when rainfall equals the mean in two successive or alternating months, or is significantly higher than the mean (>50% deviation). Using the drought period that was previously identified, the water level trends for dams within the drought period were studied. This was done to find out the extent to which the drought event affected the water levels of the dams, and how resilient the dams were as water supply sources with regards to being able to maintain a continuous supply of water during the drought event. As an extension of this, a risk assessment of the dams was carried out, where their level of risk for water insecurity was evaluated by calculating the number of days a particular dam spent in a water-insecure state, wherein the water level fell below critical levels.

It was found that all dams showed a sharp and significant drop in water level during the drought periods, with water levels for dams C, A, F, and B falling below the critical level. Only the water levels for dams E and D did not fall below the critical level throughout the entire drought period of the study timespan, demonstrating a higher tolerance to drought events. The determination of the specific drought periods in this research based on each individual basis and for each dam gave greater accuracy and stronger regionality effects that were found to be more significant for the wide variability in the dry periods and rainfall between different regions. It was also found that the dams in the northern and northeastern regions of the study area had water levels that followed monsoonal trends, with increases resulting from the Northeast Monsoon. The overall risk for water insecurity for the dams in descending order from highest to lowest risk was: dam C > dam A > dam F > dam B, and finally dams D and E. The related recovery times varied. Dam C, in the Northeast Coast region, is extremely water-insecure, with water levels remaining below the critical level even outside of the drought period for the majority of the data timespan. It is strongly recommended that mitigation measures be taken to bolster the water supply in the climate-change-affected regions.

This research was supported by the Japan Society for the Promotion of Science (JSPS). Water Database was provided by Sabah State Water Department, Malaysia. This research is part of Water for Sustainable Development (WSD) Project of the United Nations University—Institute for the Advanced Study of Sustainability (UNU-IAS), in collaboration with the University of Tokyo (UTokyo) and Universiti Malaysia Sabah (UMS). 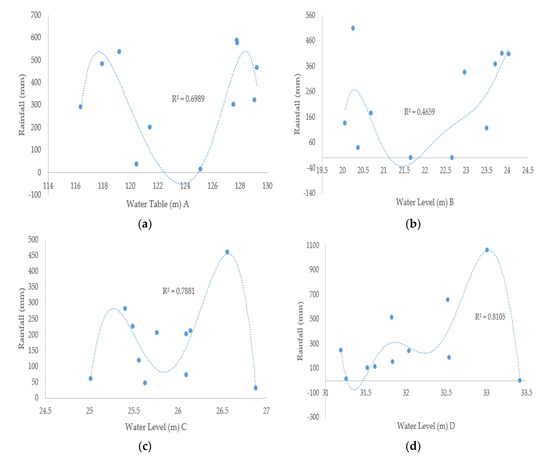