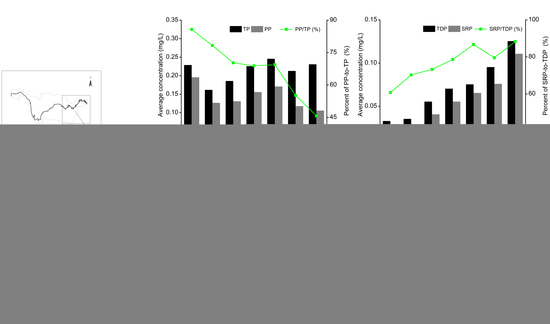 Concentrations of TP and TDP were determined by potassium persulfate digestion and the ammonium molybdate spectrophotometric method (GB 11893-89). The PP concentration was measured by subtracting the TDP concentration from the TP concentration. The SRP in each sample was determined by the molybdenum blue/ascorbic acid method [4]. Concentrations of TN were determined by using a national standard entitled the alkaline potassium persulfate digestion-UV spectrophotometric method (HJ 636-2012). SS was determined by using the gravimetric national standard method (GB 11901-89). All water samples were measured on hydrological ship. After the water samples were collected, for every 10 water samples tested, one of the water samples should be randomly selected for parallel sample analysis. The relative error of the measured value of the parallel sample must be less than 5%. In addition, quality control samples were also added when testing water samples, and the determination results of quality control samples must be within the range of their standard values, so as to ensure the accuracy of the test results of each collected water sample.

The concentrations of TN, TP, TDP, PP, and SRP in upper and lower reaches of the urban river stretches along the middle and lower reaches of Yangtze River were obtained from a field survey in July 2014. Hydrologic and sediment data were collected from the Changjiang Sediment Bulletin [11], while wastewater discharge in the Yangtze River Basin was obtained from the Water resources bulletin of the Yangtze River Basin and the southwestern rivers [12]. Correlation analysis of PP and SS were carried out using SPSS (IBM SPSS Statistics 22.0).

Major physical and chemical parameters at different sampling points are summarized in Table 1. The physical and chemical parameters of main urban river stretches were the average values of the upstream and downstream of the city. During the flood season, the water was weakly alkaline in general, and the average pH values ranged from 7.98 to 8.13. The average DO concentrations ranged from 6.85 to 7.77 mg/L, which satisfied the standard of class I-II water as outlined in the "Environmental Quality Standards for Surface Water" (GB 3838-2002). Moreover, along the main stream of the urban river stretches from the middle to lower reaches of the Yangtze River, the average turbidity level observably increased from 30.88 nephelometric turbidity units (NTU) in Wuhan (WH) to 64.40 NTU in Nanjing (NJ) and then decreased to 51.28 NTU in Shanghai (SH), which increased by 66.1% overall. The average temperature range was 21.8–23.9 °C, which tended to slightly decrease from the middle reach to the lower reach of the Yangtze River. The average EC level ranged from 151.5 to 243.0 μs/cm, and the average chlorophyll-a level ranged from 3.15 to 4.15 μg/L. The average ORP level moderately decreased from 533.4 mv in WH to 418.2 mv in SH, which decreased by 21.60% overall (Table 1).

3.2. Distribution Characteristics of Phosphorus in the Main Urban River Stretches

Phosphorus is the first controlling element that restricts algae growth in most fresh water, which is also an important factor that causes water eutrophication [13,14,15]. The form of phosphorus in the water body is TDP and PP. The main existing form of TDP is SRP, while PP are mainly adsorbed on the surface of sediment particles as well as combined with living cells and organic clastic molecules. Therefore, it is crucially important to accurately monitor the quantity of various forms of phosphorus concentration and its change in water bodies, which is conducive for the comprehensive assessment of the state of the water environment.

TDP is an important component of phosphorus in the water body [24,25]. The TDP and SRP concentrations of the urban section are the average values of the upstream and downstream of the city. As shown in Figure 4, the average TDP concentration range from WH to SH was 0.033–0.125 mg/L. The average TDP concentration along the middle and lower reaches of the Yangtze River demonstrated a gradually increasing trend, which reached its maximum in SH, approximately 3.8 times that observed in WH.
SRP is a directly accessible phosphorus source for aquatic organisms, and it can be directly absorbed and used by aquatic plants and animals, such as phytoplankton, which causes eutrophication problems [25]. SRP gradually becomes one of the main factors for researching the phosphorus cycle and the biological effect of phosphorous in the aquatic environment. The average SRP concentration was 0.020-0.110 mg/L from WH to SH, which showed an overall increasing trend (Figure 4). The average SRP-to-TDP ratio increased from 60.73% in WH to 88.28% in SH, which indicated that inorganic phosphorus existed in the main form of SRP, which was consistent with results of previous literature [20].
From the natural point of view, the average velocity of the river had a tendency to slow [23], resulting in sedimentation of PP and an increase in the SRP concentration. From the perspective of human activities, according to the "Emission Standards for Pollutants in Urban Sewage Treatment Plants" (GB 18918-2002), even if the TP emission concentration reached the Class A standard (0.5 mg/L), it would not satisfy the class V water standard (GB 3838-2002), and phosphorus emission concentrations in urban river sections were still very high. Therefore, the SPR concentration exhibited an increasing trend along the middle and lower reaches of the Yangtze River.

3.3. The Impact of Cities on Phosphorus Distribution

3.4.1. PP and SRP in Surface and Bottom Layer Water

3.4.2. PP and SRP in the Left and Right Shores and the Central Line of Urban Lower Reaches

3.5. The Possible Changes in PP and SRP under the Current Situation

Based on monitoring data from June 2014, this paper studied the distribution characteristics and spatial differences of phosphorus in the main urban stretches of the Yangtze River. Combined with historical statistical results, the possible changes in PP and SRP were analyzed under the current situation. Moreover, the following suggestions were concluded with regard to the monitoring and control of phosphorus along the middle and lower reaches of the Yangtze River. The main conclusions and suggestions are as follows:

(1)
Based on onsite data analysis in June 2014, the average PP changed from 0.195 mg/L to 0.105 mg/L from WH to SH, and the average PP-to-TP ratio decreased from 85.71% in WH to 45.65% in SH, which showed a gradual decrease, while the average SRP changed from 0.033 to 0.125 mg/L, and the average SRP-to-TDP ratio increased from 60.73% in WH to 88.28% in SH, showing a gradual upward trend. In general, PP was still the principal form of TP in the middle and lower reaches of the Yangtze River; however, the PP-to-TP ratio had a decreasing trend compared with that of historical data.
(2)
Overall, the average PP and SRP concentrations of the lower reach of each city were relatively higher than those of the upper reach, which was highly likely to be associated with the discharge of wastewater in urban river stretches along the Yangtze River Basin. Therefore, phosphorus emissions of municipal wastewater treatment plants should also be monitored and analyzed in the main urban river stretches, and the water environmental capacity of phosphorus of the main urban river stretches would also need to be calculated and analyzed to strictly control phosphorus emissions of urban river stretches along the middle and lower reaches of the Yangtze River.
(3)
Actual monitoring data showed that the concentrations of the PP and SRP of different sampling locations and water depths in same monitoring section showed differences. As a result, the phosphorus concentration of the sampling point did not represent the phosphorus concentration of the monitoring section. Therefore, the phosphorus flux of the monitoring section needs to be monitored.
(4)
Combined with an evaluation of long-term monitoring data and field surveys, the SRP had an increasing tendency on the whole. The risk of water eutrophication was not optimistic, especially in the Yangtze River estuary, the riparian zone of the urban river stretches, the tributary slow-flowing river section and in the corresponding naturally connected lakes. Therefore, the research in the middle and lower reaches of the Yangtze River should focus on strengthening the emergency monitoring and rapid warning of phosphorus pollution in sensitive areas.

Conceptualization, L.D.; methodology, L.L. and X.T.; investigation, Z.H. and L.L., L.D., and L.Z.; resources, M.W. and R.L.; L.D. wrote the manuscript and all authors contributed to improving the paper. All authors have read and agreed to the published version of the manuscript.

We thank the reviewers for their useful comments and suggestions. 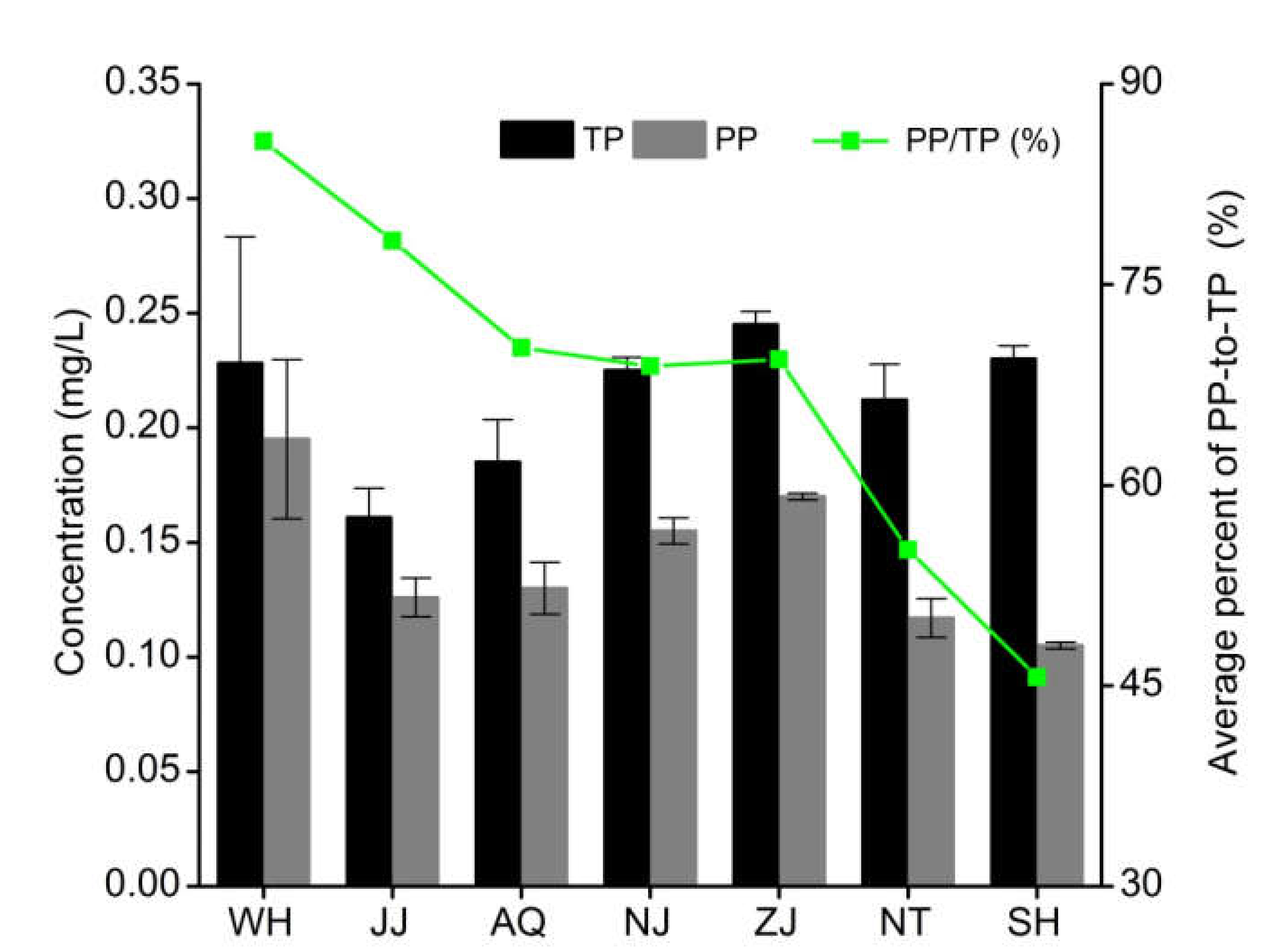 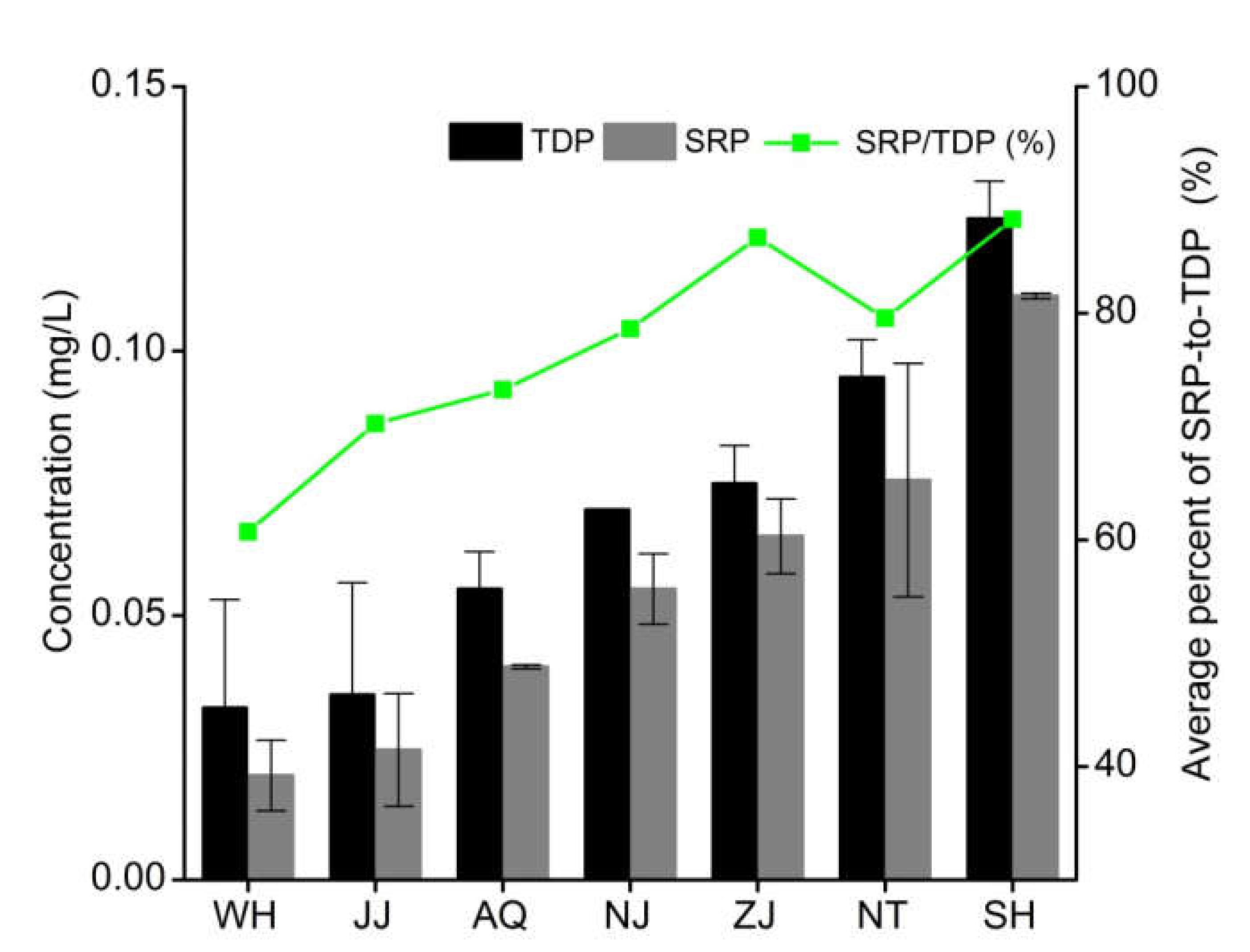 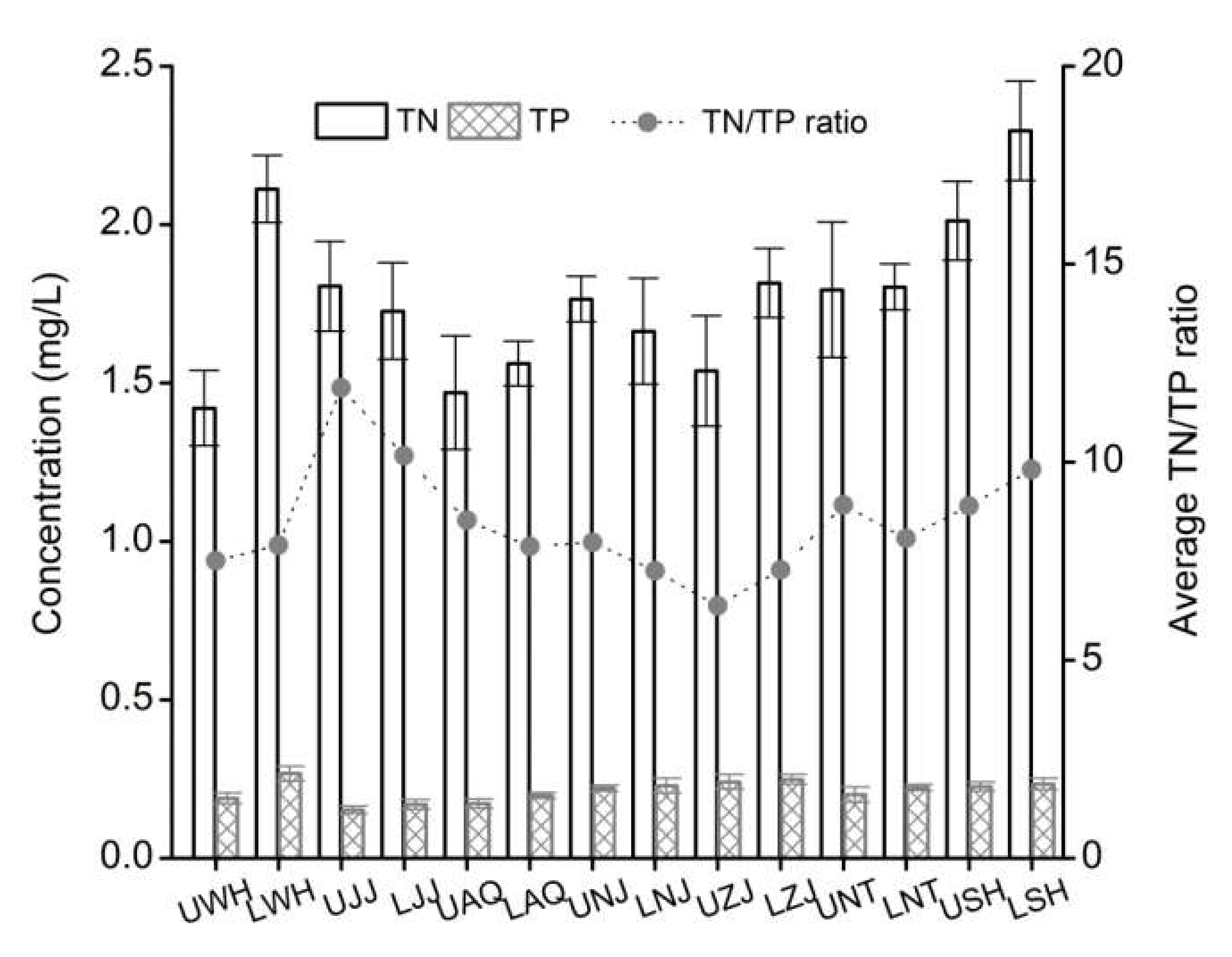 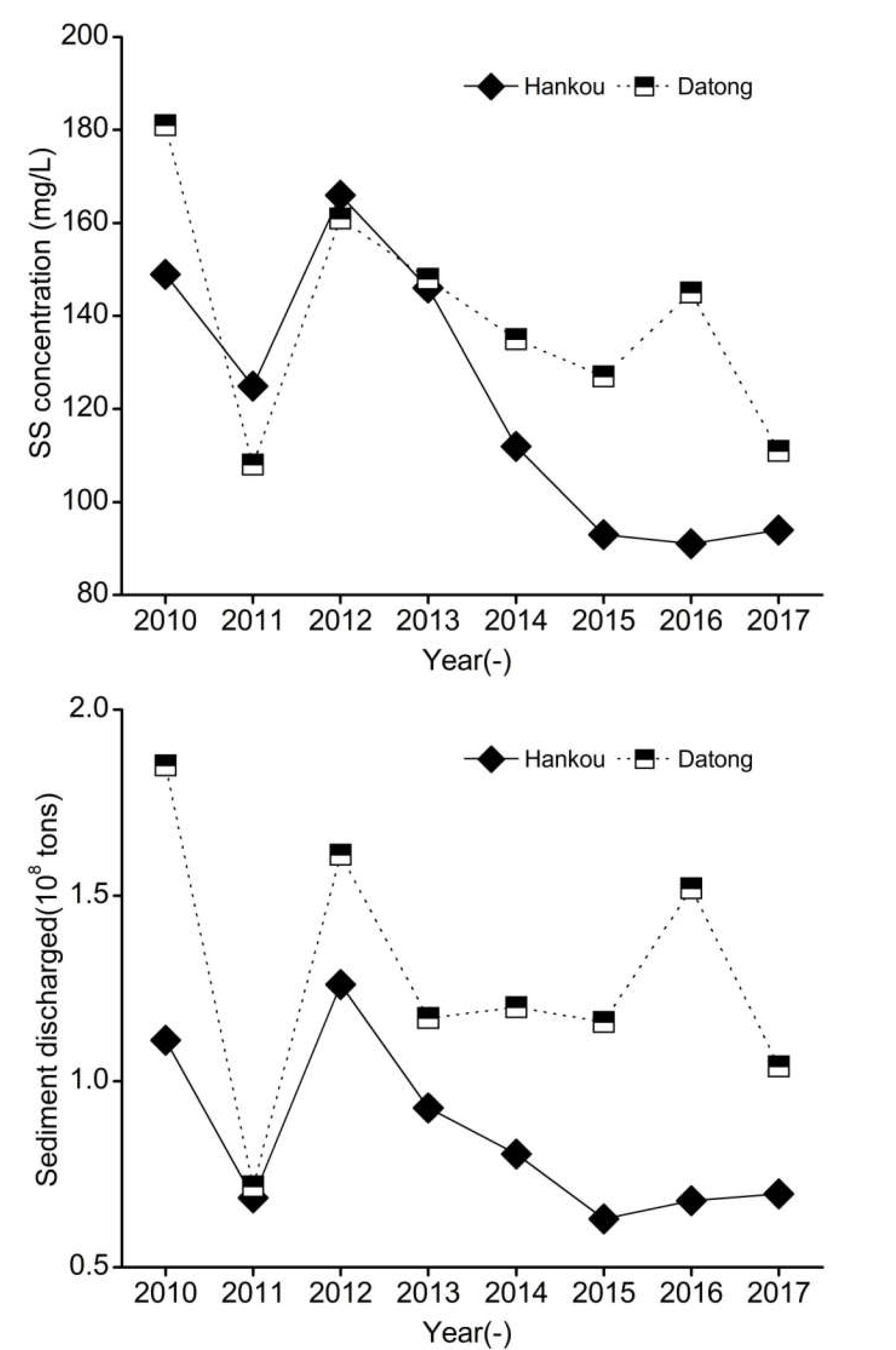 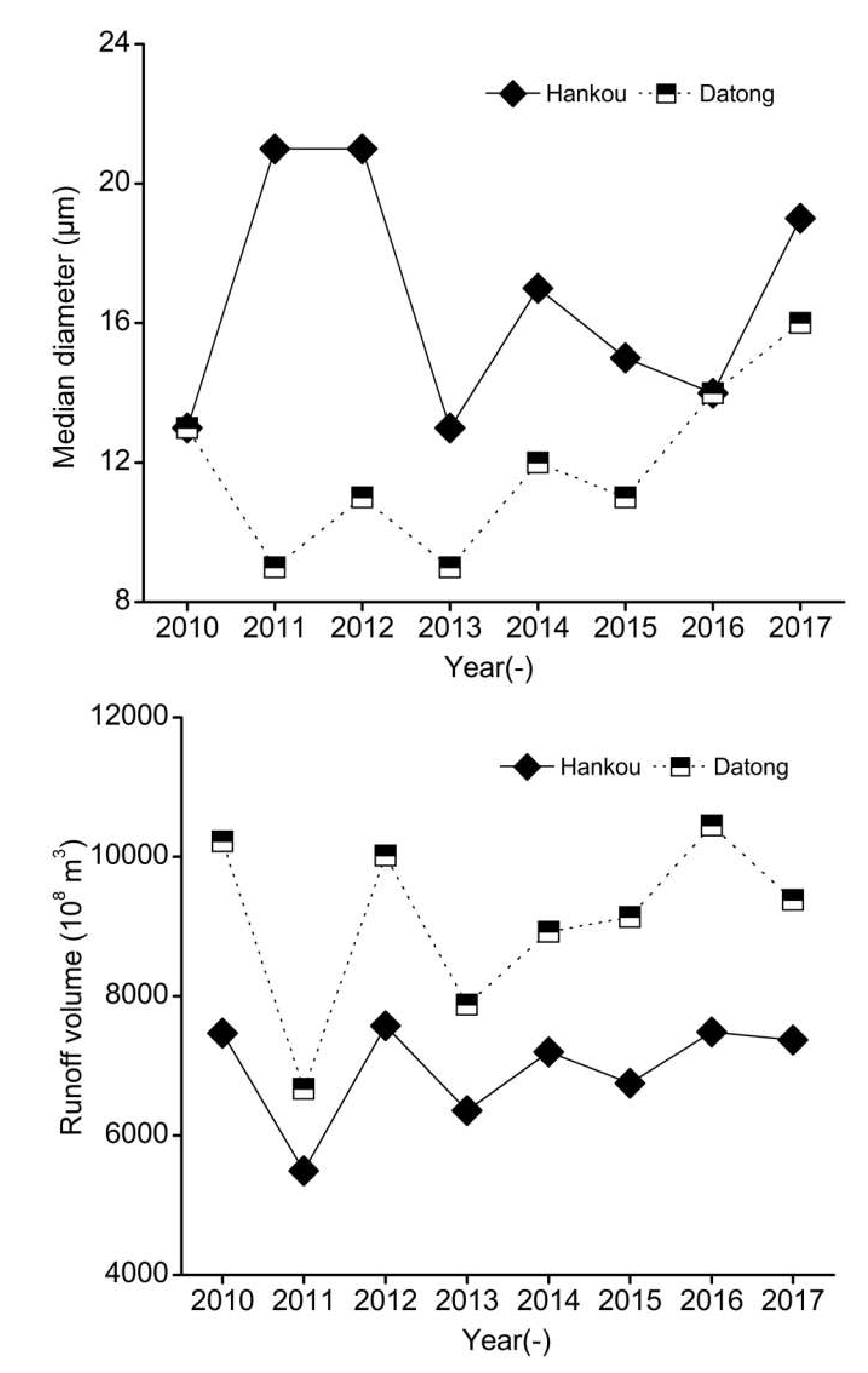 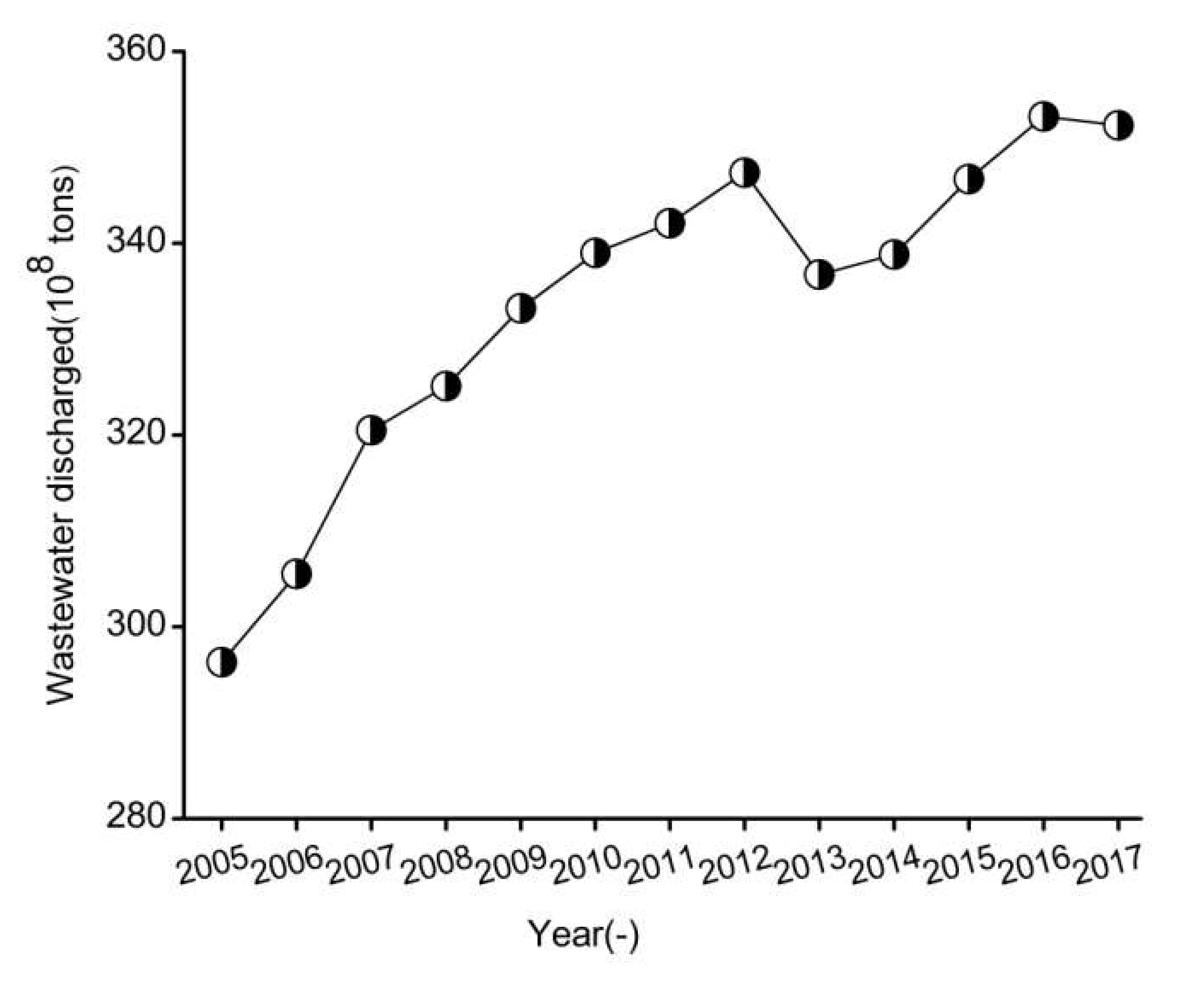