:
Streamflow is likely affected by climate change and human activities. In this study, hydro-meteorological data from six rivers upstream of Beijing, namely, the Yongdinghe, Baihe, Heihe, Chaohe, Juhe, and Jumahe Rivers, were analyzed to quantify the spatial and temporal variability of streamflow and their responses to climate change and human activities over the period of 1956–2016. The Mann–Kendall test and moving t-test were used to detect trends and changing points of the annual streamflow. Results showed that the streamflow into Beijing experienced a statistically significant downward trend (p < 0.05), abruptly changing after the early 1980s, owing to climate and human effects. The climate elasticities of the streamflow showed that a 10% decrease in precipitation would result in a 24.5% decrease in total streamflow, whereas a 10% decrease in potential evapotranspiration would induce a 37.7% increase in total streamflow. Human activities accounted for 87% of the reduction in total streamflow, whereas 13% was attributed to climate change. Lastly, recommendations are provided for adaptive management of water resources at different spatial scales.
Keywords:
streamflow; climate change; human activities; climate elasticity; Beijing

3.1. Detection of Trends and Changing Points

The nonparametric Mann–Kendall test developed by Mann [37] and Kendall [38] is used to detect the significance of the trends and changing points in the hydro-meteorological time series. This widely used method has the following advantages: (1) it is suitable for non-normally distributed data and censored data that are frequently encountered in a hydro-meteorological time series [39], and (2) it is robust to the presence of a small amount of abnormal data [40].
For the given time series X(x1, x2, . . . ,xn), the statistic S is defined as follows. where
Mann [37] and Kendall [38] showed that the statistic S is approximately normally distributed, with the expected value and variance given by the following.
The standardized statistic is shown below.
In a two-sided test, the null hypothesis (no trend) is accepted when –Z1-α/2 ≤ Z ≤ Z1-α/2. Here, Z < –Z1-α/2 indicates a decreasing trend, and Z > Z1-α/2 indicates an increasing trend, where α is the significance level [41]. In this study, α is set to 0.05.
To detect the changing points in the hydro-meteorological data Xt = (x1, x2,…, xn), the sequential Mann-Kendall test is used. To apply this method, the cumulative number ni of samples, where xi > xj (1 ≤ j ≤ i), should be calculated. The normally distributed statistic Sk can be calculated via the following formula.
The expected value and variance of the normally distributed statistic Sk are given by the following.
The normalized statistic UFk is estimated as follows: where UFk is the forward sequence, and the backward sequence, UBk, is calculated using the same equation but with a reversed series of data. A positive UFk denotes an upward trend, while a negative UFk denotes a downward trend. The null hypothesis (no step changing point) is rejected if any of the points in the forward sequence, UFk, are outside the confidence interval. An intersection point of UFk and UBk located within the confidence interval indicates the beginning of a step changing point [42,43].

3.3. Attribution of Climate Change and Human Activities on the Streamflow

4.1. Trends and Changing Points of the Annual Streamflow

4.2. Climate Elasticity of the Streamflow

4.3. Impacts of Climate Change and Human Activities on the Streamflow

5.1. Rationality of the Attribution Analysis

To reduce uncertainty of the climate elasticity method in this study, the Mann–Kendall test and moving t-test were jointly used to detect trends and changing points of the annual streamflow. An attribution analysis was performed. In this study, human activities accounted for the majority of streamflow reduction in the Yongdinghe River catchment, approximately 87%, in agreement with previous studies [41,49]. Table 4 lists the results of previous studies that attributed the streamflow changes to climate change and human activities in the Chaobaihe River catchment. Comparing the results of this study (Table 3) with those of the previous studies listed in Table 4, our estimate of the main driving force for the streamflow reduction in the Chaobaihe River catchment was consistent with previous estimates. However, there was a difference in the contribution of human activities to the streamflow changes. We attribute these differences to methodological choices; different hydro-meteorological stations, different study periods, and different methods of analysis were used in each study. The results are reasonable and could be a reference for the adaptive management of water resources. Nevertheless, previous studies [9,32,33,34,50] performed an attribution analysis using different methods in other regions. To compare and verify our results, other methods should be evaluated to further quantify the impact of climate change and human activities on streamflow.

A quantitative analysis using the climate elasticity method can enhance our understanding of the streamflow changes into Beijing and the streamflow response to climate change and human activities over time. The adaptive management of water resources should be considered at different spatial scales to achieve harmony of resources, ecology, and socio-economics. The excess emphasis placed on human water use crowds out ecological water use that might cause ecological system degradation. The ecological water demand can be estimated as the minimum amount of water to prevent the river from running dry and allow aquatic biology to survive [14]. To maintain ecosystem health, we suggest that not only water for living and production, but also ecological water demand should be guaranteed in the future. This could be achieved by a reservoir regulation strategy in the Yongdinghe River catchment. Since the early 1980s, numerous soil and water conservation measures, such as an afforestation and planting grass, have been implemented. The proportion of forest and grassland area exceeds 50% of the total area in the Chaobaihe, Jehu, and Jumahe River catchments. Conservation measures prevented the loss of water and soil erosion; however, these may be responsible for the significant reduction of streamflow. Therefore, soil and water conservation measures should be practiced more reasonably and moderately. In addition, because of low water use efficiency in the study area, enforcement of water conservation is required. Cropland accounted for 40% of the study area; thus, water infrastructure should be increased to improve irrigation water use efficiency. For regions with a high population density and socio-economic development, especially the upstream area of the Yongdinghe River catchment, there are growing demands for industrial and domestic water use. The use of water saving devices and unconventional water resources, such as rainwater resources and recycled water, should be promoted.
The streamflow into Beijing has experienced a statistically significant decline since the 1980s, impacting the city’s water supply. In recent years, Beijing has had to rely on water diversion and overexploitation of groundwater to meet water demand. Enhanced cooperation between the upstream and downstream areas of the catchment is required to achieve integrated watershed management. Among the four catchments, the Yongdinghe and Chaobaihe River catchments provide the majority of Beijing’s surface water. The drainage area of these two catchments accounts for 90% of the total study area. The mean annual streamflow of these two catchments over the period 1956–2016 was 1.2 billion m3, 72% of the total streamflow into Beijing. Compared to the other catchments, the Yongdinghe and Chaobaihe Rivers have more influence on the total streamflow into Beijing, and their limited water resources have a significant impact on sustainable water resource use and environmental protection in Beijing. Therefore, it is important to continue to investigate the impacts of climate change and human activities in these two catchments.

With the Mann-Kendall test and t-test, the total streamflow into Beijing, as well as the six rivers, experienced a statistically significant decline over the period 1956–2016. Almost all the changing points occurred in the early 1980s. The mean annual total streamflow into Beijing declined by 69% from the baseline period to the changed period. The precipitation and potential evapotranspiration elasticities of the total streamflow into Beijing were 2.45 and −3.77, respectively, indicating that the response of the total streamflow was more sensitive to potential evapotranspiration than to precipitation. The precipitation elasticity of the streamflow of each of the six rivers varied from 0.75 to 3.05, while the potential evapotranspiration elasticity ranged from −0.47 to −4.37.
Climate change and human activities accounted for 13% and 87% of the reduction in the total streamflow into Beijing, respectively. The catchments were subjected to intensive human activities owing to the social and economic developments since the 1980s. Human activities were the dominant factor affecting the streamflow decline for all catchments. However, there were considerable differences in the contribution rates of the human activities among four catchments owing to various degrees of water withdrawal, land use/land cover change, and soil and water conservation practices. Human activities accounted for over 80% of the streamflow reduction in the Yongdinghe and Chaobaihe River catchments, with a higher density of the GDP and population and a larger area of cropland than those of the other catchments. Beijing is faced with a water resource shortage; therefore, enhancing the cooperation between upstream and downstream management to achieve integrated watershed management is required.

H.W. and Y.Z. conceived and designed the study; X.M. and H.L. collected and analyzed the data; X.M. wrote the manuscript; G.H. and J.L. reviewed and edited the manuscript. All authors have read and agreed to the published version of the manuscript.

This research was funded by the National Key Research and Development Program of China, grant number 2016YFC0401407. 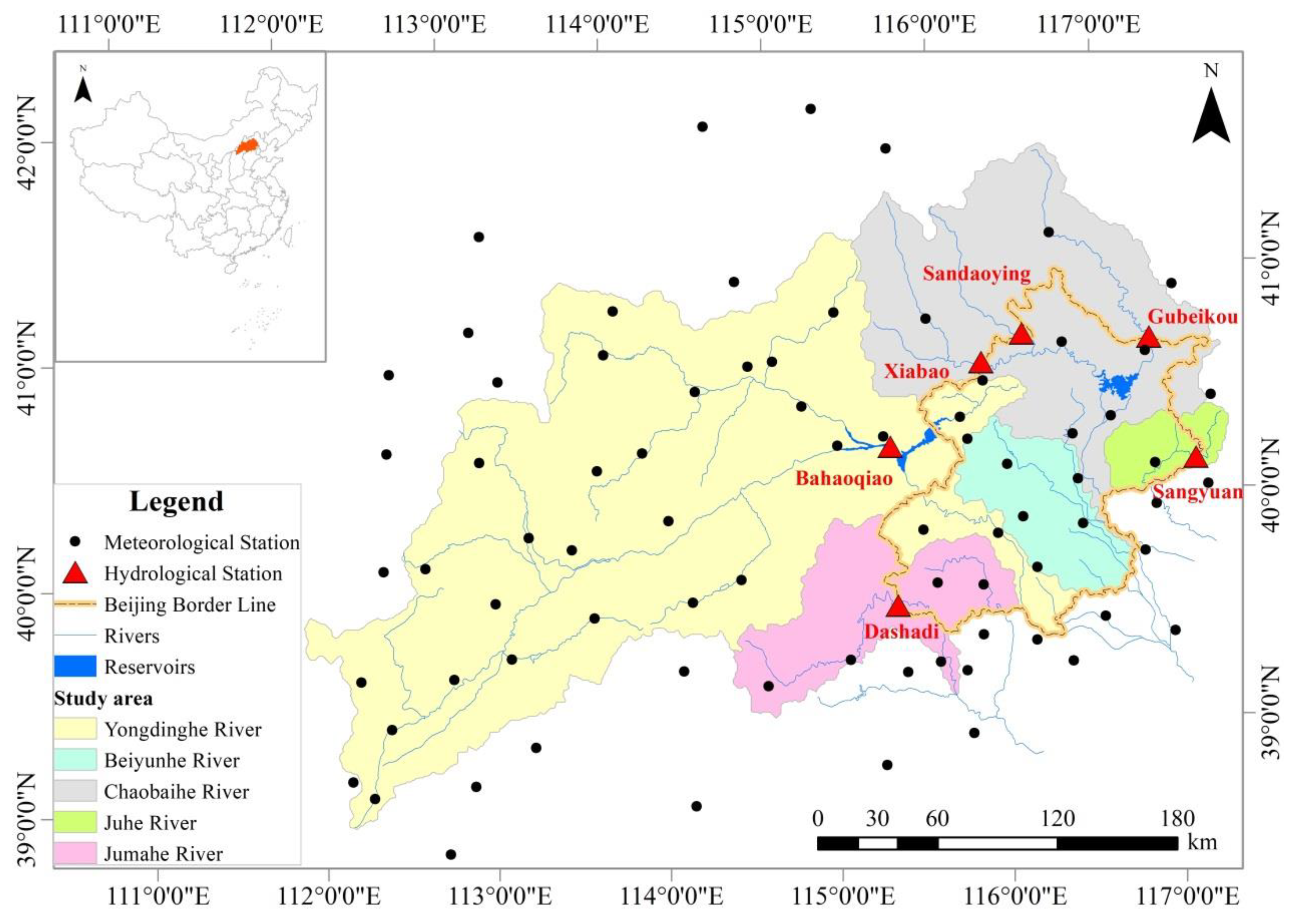 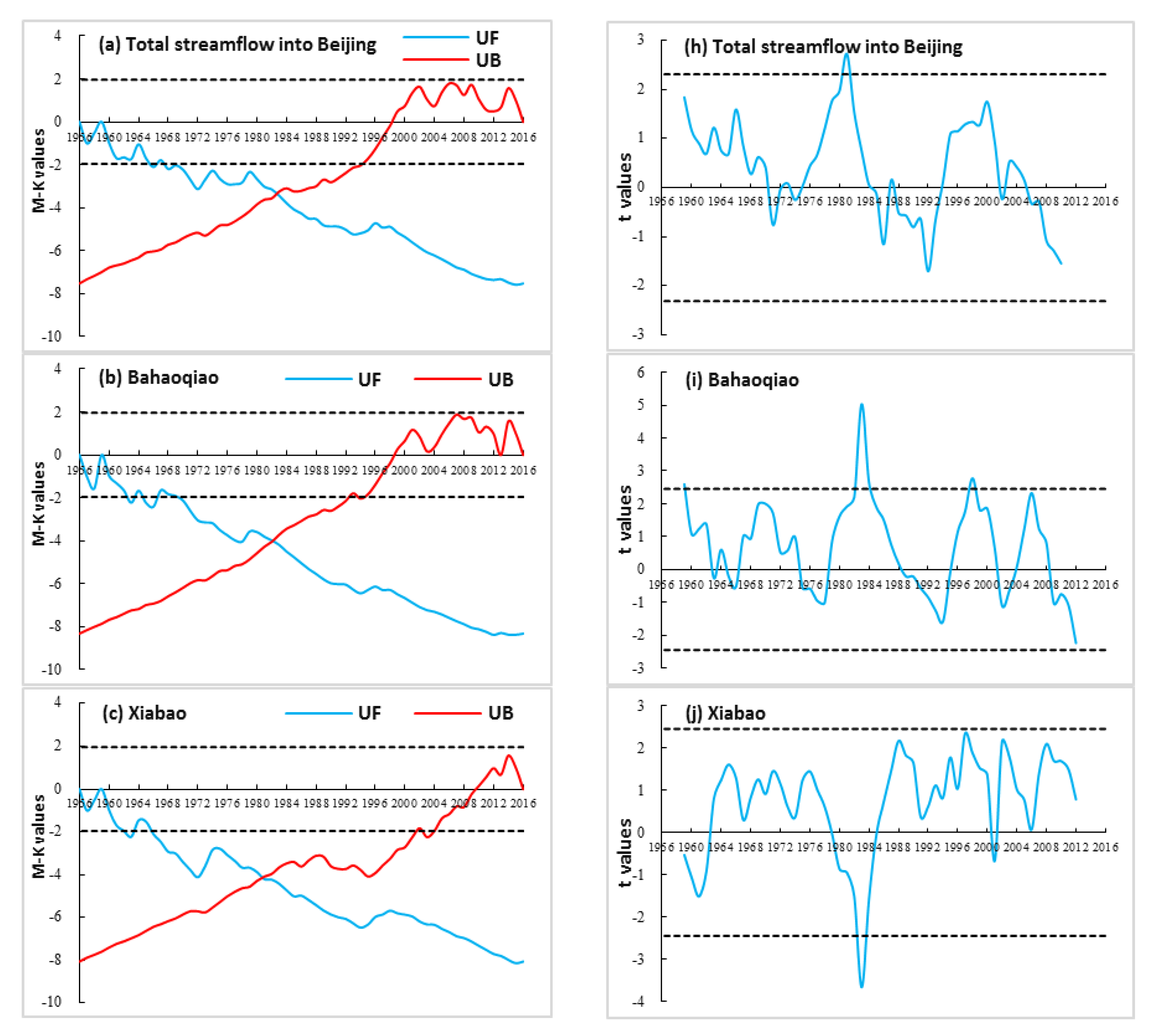 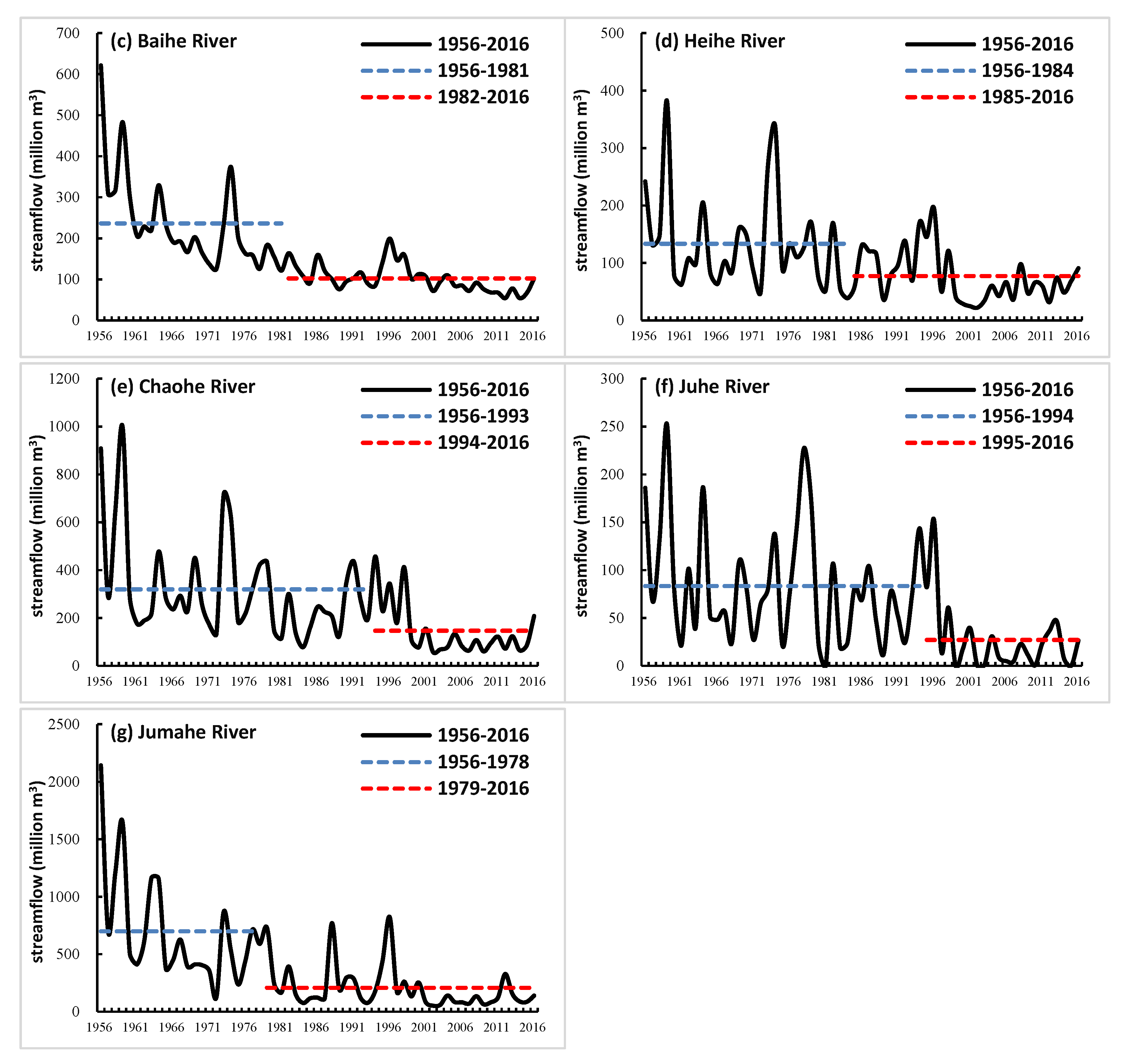 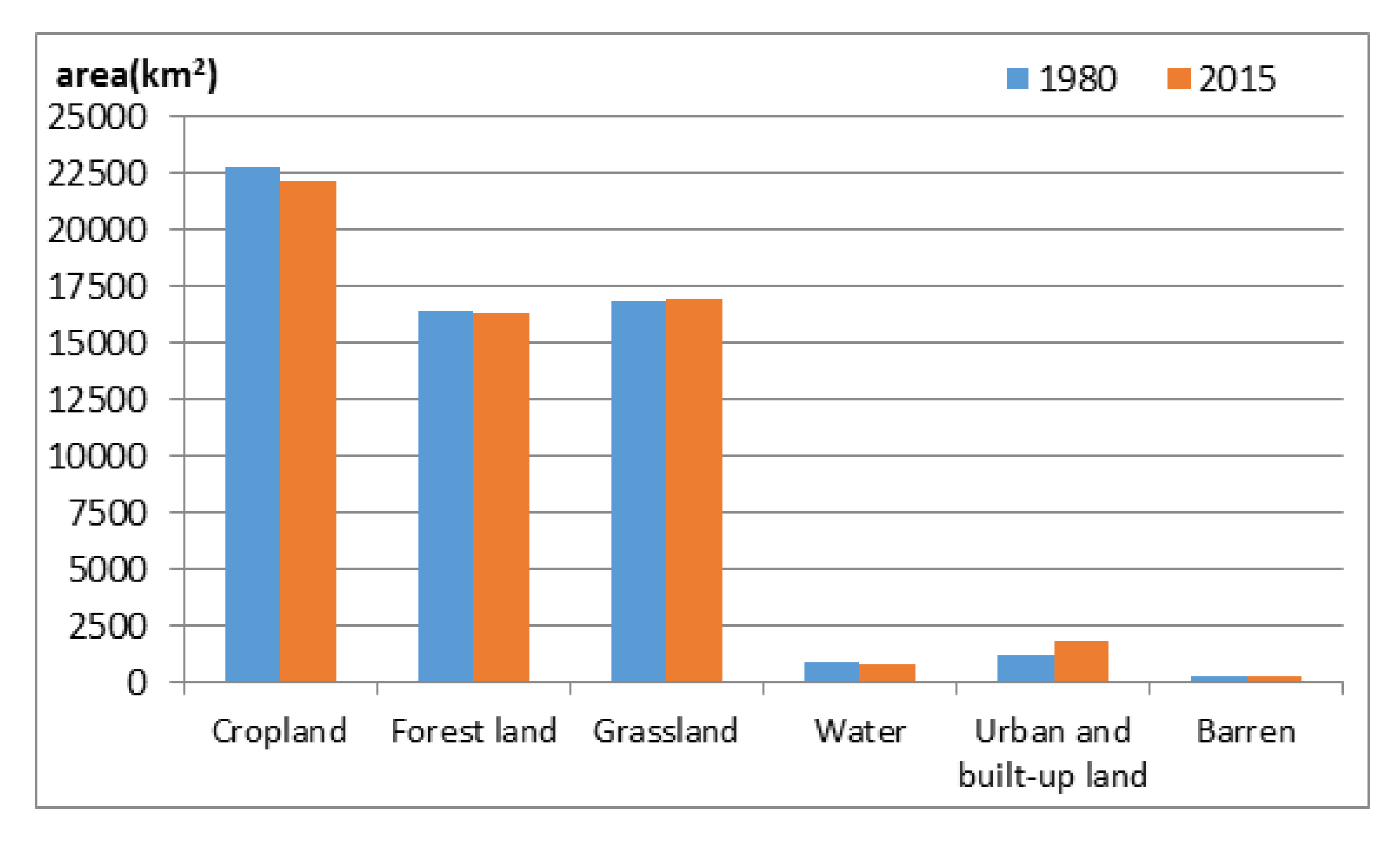 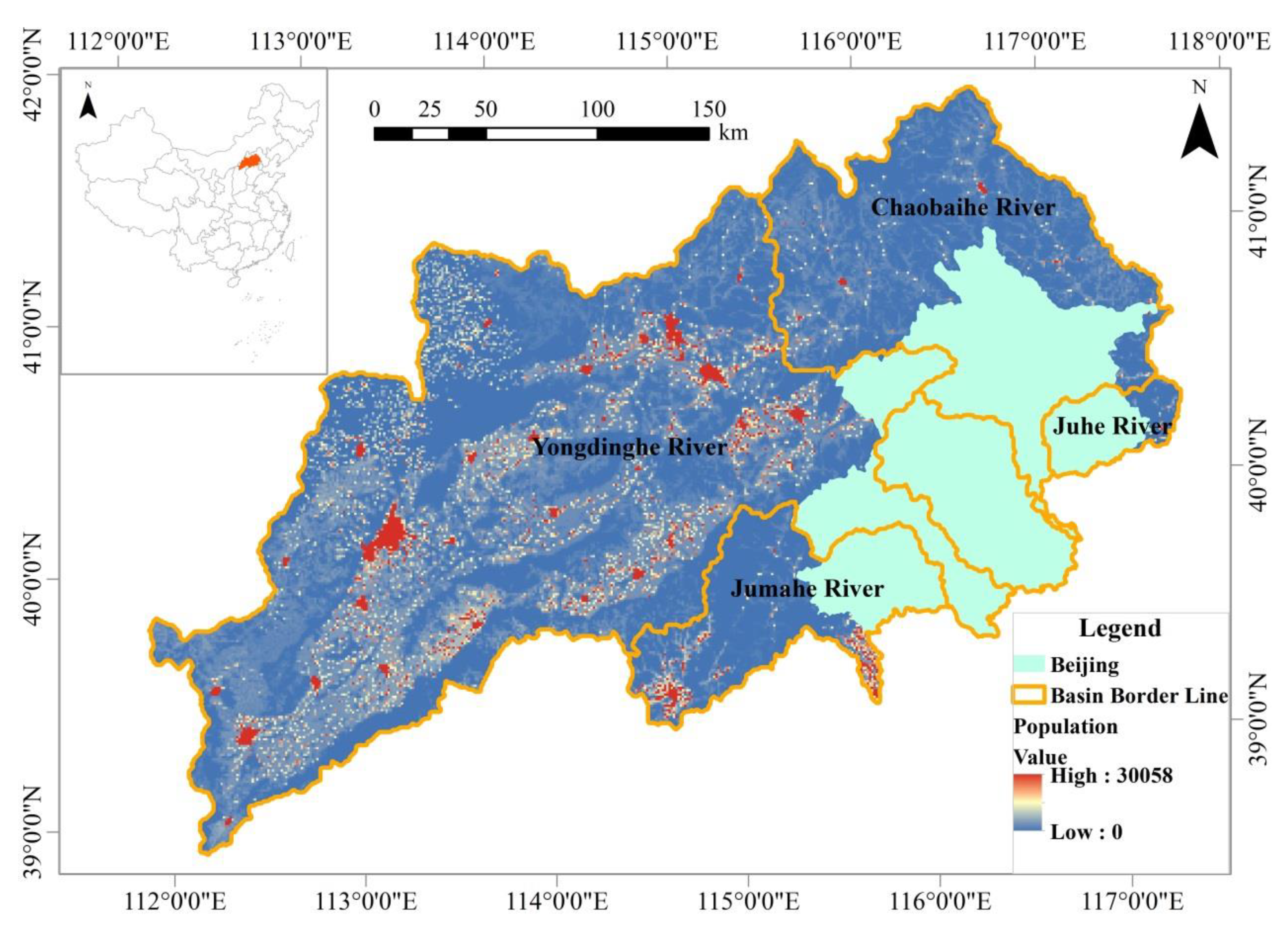