Tillage is well known to have impacts on soil properties and hydrological responses. This work aims to study the short-term impacts of tillage (0–3 months) on soil and hydrological responses in fig orchards located in Croatia. Understanding the soil hydrological response in the study area is crucial for soil management due to frequent autumn floods. The hydrological response was investigated using rainfall simulation experiments (58 mm h−1, for 30 min, over 0.785 m2 plots). The results show that the bulk density was significantly higher 3 months after tillage than at 0 and 1 months. The water holding capacity and amount of soil organic matter decreased with time. The water runoff and phosphorous loss (P loss) increased over time. The sediment concentration (SC) was significantly higher 3 months after tillage than in the previous monitoring periods, while sediment loss (SL) and carbon loss (C loss) were significantly lower 0 months after tillage than 3 months after tillage. Overall, there was an increase in soil erodibility with time (high SC, SL, C loss, and P loss), attributed to the precipitation patterns that increase the soil water content and therefore the hydrological response. Therefore, sustainable agricultural practices are needed to avoid sediment translocation and to mitigate floods and land degradation.
Keywords: soil properties; erosion; nutrient loss; undeveloped soil soil properties; erosion; nutrient loss; undeveloped soil

Historically, tillage has been used as a soil management practice for various reasons. In Mediterranean permanent plantations, tillage is often used to control weeds and prevent competition for water by undesirable plants [1,2]. Tillage reduces soil compaction temporarily [3], but with soil consolidation, soil compaction increases over time [4,5]. However, tillage has some detrimental impacts on soil properties and hydrological responses [6,7,8,9,10], enhancing land degradation [11], such as aggregate breaking and exposure to the air as aggregates entrap soil organic matter (SOM). Aggregate exposure to air increases microbial activity and mineralization, enhancing SOM losses through CO2 emissions [12,13,14]. For instance, tillage especially affects topsoil SOM [15], decreasing root biomass [16], water-extractable SOM [17] and nutrient availability (including soil phosphorous, P) [18,19]. Overall, tillage reduces soil quality [20].
Tillage alters the soil structure and decreases the aggregate size. Intensively tilled soils are more prone to consolidation, compaction, and surface crust [21]. Tillage induces temporal changes in the bulk density (BD), structure, and differential porosity, affecting hydrological properties [22,23,24,25,26]. Shortly after tillage, soils have a high water storage capacity, which decreases during re-compaction [27]. The soil pore system is modified by tillage, which creates large macro-pores that are temporally unstable and susceptible to compaction [28,29]. The hydrological response of tilled soils is tied to soil structure [16,19].
So far, the literature has shown that tillage strongly modifies the soil system and has residual effects in the following weeks [30]. In this context, it is clear that overland flow and erosion are tied to soil properties and their spatial and temporal variability [31,32,33,34]. Previous research focusing on soil erosion was carried out in cereal croplands [3,35], vineyards [11,31,36], and olive [37,38], avocado [39], citrus [40], almond [41], persimmon [42], apple [43], and apricot [44] orchards. Nevertheless, to our knowledge, no study has been carried out in fig orchards, which is an essential issue since these types of orchards are traditional crops in the Mediterranean region [45,46].
This study aims to assess the short-term impacts of tillage on soil properties and hydrological response in a fig orchard installed in young and underdeveloped soils with very high calcareous content. Therefore, the current work is highly novel and relevant for understanding the impact of tillage on land degradation in this type of soil.

The study area is located in Peračko Blato, Croatia (43°4′ N, 17°26′ E, average 7 m a.s.l.), and has an average slope of 5.5° (Figure 1). The climate is Mediterranean, with an average annual precipitation (1998–2018) of 1123.6 mm, and the intra-annual differences range between July as the driest month (26.7 mm) and November as the wettest month (148.3 mm) (Figure 2). The average annual temperature is 16 °C, with the coldest weather in January (6.9 °C) and the warmest in July (26 °C) [47].
The soil in the study area is classified as a Calcic Fluvisol [48], developed on calcareous lake sediments with a high content of carbonates (>80%) and cation exchange capacity saturation (90% domination of exchangeable Ca2+). The general soil properties are summarized in Table 1. The research area was formerly under a freshwater lake, which was partially drained in 1912 when a tunnel connecting the lake with the sea was constructed. After the construction of this infrastructure, the lake water level was reduced by ~12 m. However, floods often affect the lands near the lakes in the autumn-winter period. The new areas uncovered by water were used for cropping vegetables, vines, olives, figs, and citrus.

Eight plots separated by 4 m were established in a 5-year-old fig (Ficus carica) orchard. The fig variety is Petrovača bijela, planted with a distance of 7 × 8 m. The plots had a similar slope (mean 5.5°) and north exposition. The fig orchard is managed with shallow rotation tillage (manually guided rotating spading machine) 2 times a year (spring and late summer or early fall) as a weeding method to a depth of 10 cm. No herbicide was applied in this orchard. All plant protection, soil management, and pomo-technical practices were performed manually without the use of machinery. Field experiments were carried out in 2018 during August (2 days after tillage—0 months), September (one month after tillage), and November (three months after tillage). During the experiments, the soil was bare. A set of rainfall experiments was carried out using a pressurized rainfall simulator (UGT Rainmaker, Müncheberg, Germany), previously calibrated using a plastic vessel of known dimensions. Rainfall simulations were 30 min long, with the rainfall intensity set to 58 mm h−1 because 93% of the annual soil loss was measured in a single rainstorm event at a rainfall intensity of 59 mm h−1 [31]. Before the simulations, undisturbed soil samples (0–10 cm) and soil core samples (0–10 cm) were taken in the vicinity of each plot. To enclose the plot catchment area, a metal ring (0.785 m2) with a faucet was stuck 5 cm into the soil with the faucet facing downslope. At the end of the faucet, a plastic canister was connected to collect the overland flow. During each simulation, the time to ponding (TP) and time to runoff (TR) were measured using a chronometer. The experimental rainfall events were performed in August 2018, 2 days after shallow rotational tillage management (0 months). The measurements in September and November were performed in the same orchard 1 and 3 months after tillage. In each rainfall experiment, the catchment area was established in the vicinity of the previous measurement area (2 m).

The soil water content (SWC), bulk density (BD), and water holding capacity (WHC) were analysed according to the soil core method (weighting, wetting, and drying) [49]. For the undisturbed soil samples, we followed soil structure assessment preparation guidelines, according to Diaz-Zorita et al. [50]. Samples were carefully manipulated by hand, ensuring that the formed aggregates were not broken. During this preparation, all stones, roots, and other non-soil fragments were removed. Following aggregate separation, the samples were air-dried in the greenhouse at ~30 °C for 3 days and sieved with an auto-sieve shaker for 30 seconds [46] to separate particle fractions with diameters >8, 5, 4, 2, 1, 0.5, 0.25 and <0.25 mm. After weighing, the mean weight diameter (MWD) was determined using the following equation: where “xi is the mean diameter of any particular size range of aggregates separated by sieving, and wi is the weight of aggregates in that size range, as a fraction of the total dry weight of soil used” [51]. The 1–2 mm fraction was separated after weighing for water-stable aggregate (WSA) analyses, while the rest of the sample was milled and passed through a 2 mm sieve in preparation for chemical analyses. The WSAs were determined on Eijkelkamp’s wet sieving apparatus following Kemper and Rosenau [52]. The chemical analyses were performed as follows: SOM using the Walkley and Black [53] method and soil and sediment available P (P2O5) by the ammonium lactate (AL) method [54].
Canisters filled with the overland flow were weighed, and the sediment was filtered through filter paper (0.45 microns) to calculate the mass of sediment loss (SL) after air drying for 72 h. The sediment mass was subtracted from the mass of the overland flow to obtain the water runoff (WR). The sediment concentration (SC) was calculated by dividing the mass of the sediment by the mass of the water in overland flow. Data were converted to g L−1. Sediments collected from the filter paper were finely milled and passed through a 2 mm sieve to evaluate carbon loss (C loss) and P loss. C in sediments was measured using dry combustion with an Elementar Vario Macro CHNS analyser.

Data normality and homogeneity of the variances were assessed using Shapiro–Wilk and Levene’s tests, respectively. Data were considered a normal distribution, and heteroscedasticity was considered at p > 0.05. Natural logarithm (Ln), logarithm (log), and Box Cox (BC) were applied to normalize the data (SWC, WSA, P2O5, TP, SC, SL, C loss, and P loss). Except for the SWC and WSA, all other variables followed a normal distribution after BC transformation. One-way analysis of variance (ANOVA) was applied to identify significant differences between sampling dates. In the case of SWC and WSA, the non-parametric Kruskal–Wallis ANOVA test was applied. In the figures, the original data are shown. If significant differences were observed at p < 0.05, a Tukey Least Significant Difference (LSD) post hoc test was applied to identify differences within treatments. In the case of SWC and WSA, a multiple comparison mean rank test was applied. Principal component analysis (PCA) based on the correlation matrix was performed using BC transformed datasets. No rotational procedures were applied. Statistical analysis was carried out using Statistica 12.0. Graphical representation of the results was performed using Plotly software [55].

During the study period, lower rainfall was observed in August and September 2018 than in the monthly average from 1998–2018 (Figure 2). In November 2018, however, rainfall was substantially higher than that observed in the climatological normal. Regarding the temperature, the monthly average in 2018 was slightly higher than that in 1998–2018 (Figure 2).

PCA identified four major factors that explained 84.99% of the total variance. Factor 1 explained 49.08%, while Factor 2, Factor 3, and Factor 4 explained 16.44%, 10.79%, and 8.69% of the total variance, respectively (Appendix A, Table A1). Most of the variables were explained by the factor 1 (Appendix A, Table A2). The relation between Factor 1 and Factor 2 is shown in Figure 7A. The BD, SWC, MWD, WR, SC, SL, C loss, and P loss were highly associated. On the other hand, these variables exhibited the opposite behaviour of the WSA content, SOM, P2O5, WHC, TR and TP. The differences between variables are more marked between 0 and 1/3 months after tillage. Between the last two months, the differences are minimal (Figure 7B).

This short-term study shows that the SWC, BD, MWD, TP, and TR were significantly higher 3 months after tillage than immediately after tillage. The WHC, WSA (despite the lack of statistical significance) SOM, P2O5 content, WR, SC, SL, C loss, and P loss showed the opposite dynamics. With time, the variability in the parameters studied increased, and the seasonal rainfall kinetic energy impact increased. Overall, with time, there was an increase in post-tillage consolidation that, together with soil saturation, a reduction in surface roughness, and crust formation, augmented the loss of sediments and nutrients. The current management practices have negative impacts on soil properties, which lead to increasing land degradation, with potential site impacts on fig yields and offsite environmental impacts, such as lake siltation and eutrophication. It is urgent to apply more sustainable agricultural management practices to avoid runoff, nutrient translocation, and floods.

This research was supported by the Croatian Science Foundation through the project “Soil erosion and degradation in Croatia” (UIP-2017-05-7834) (SEDCRO) and COST Action LAND4FLOOD (CA16209) supported by European Cooperation in Science and Technology, www.cost.eu.

Manuel Matišić is acknowledged for assistance with the field research. 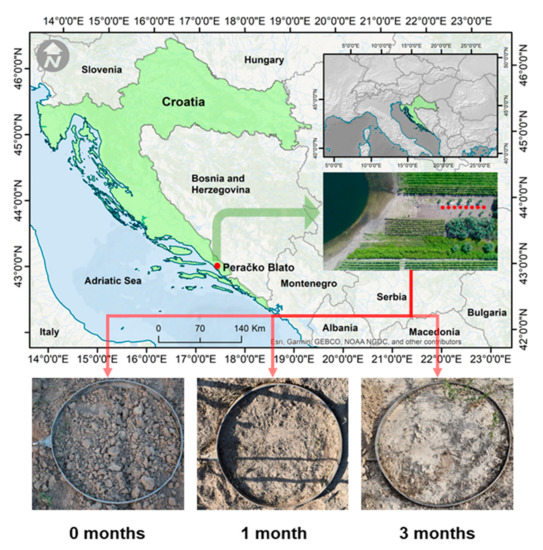 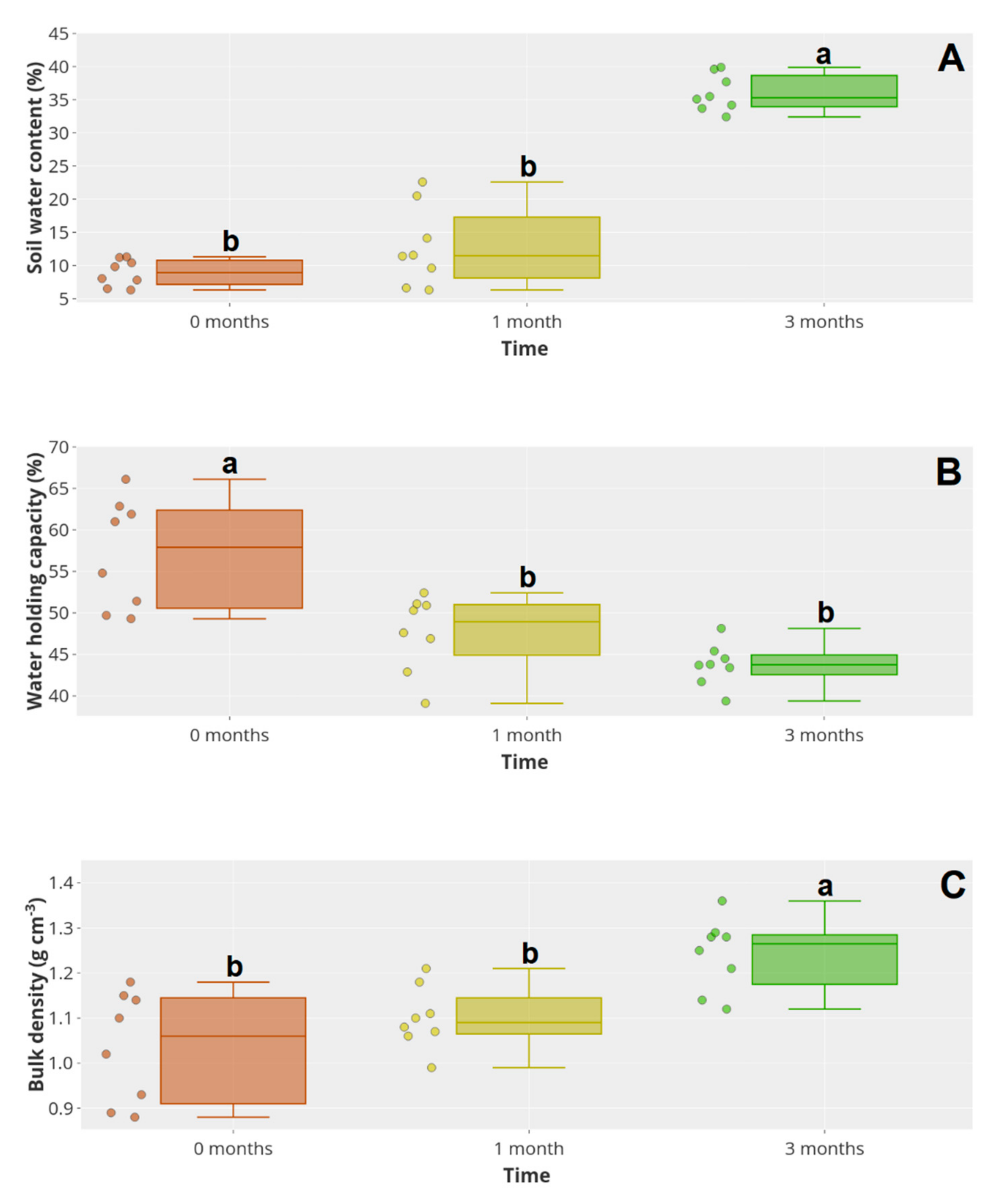 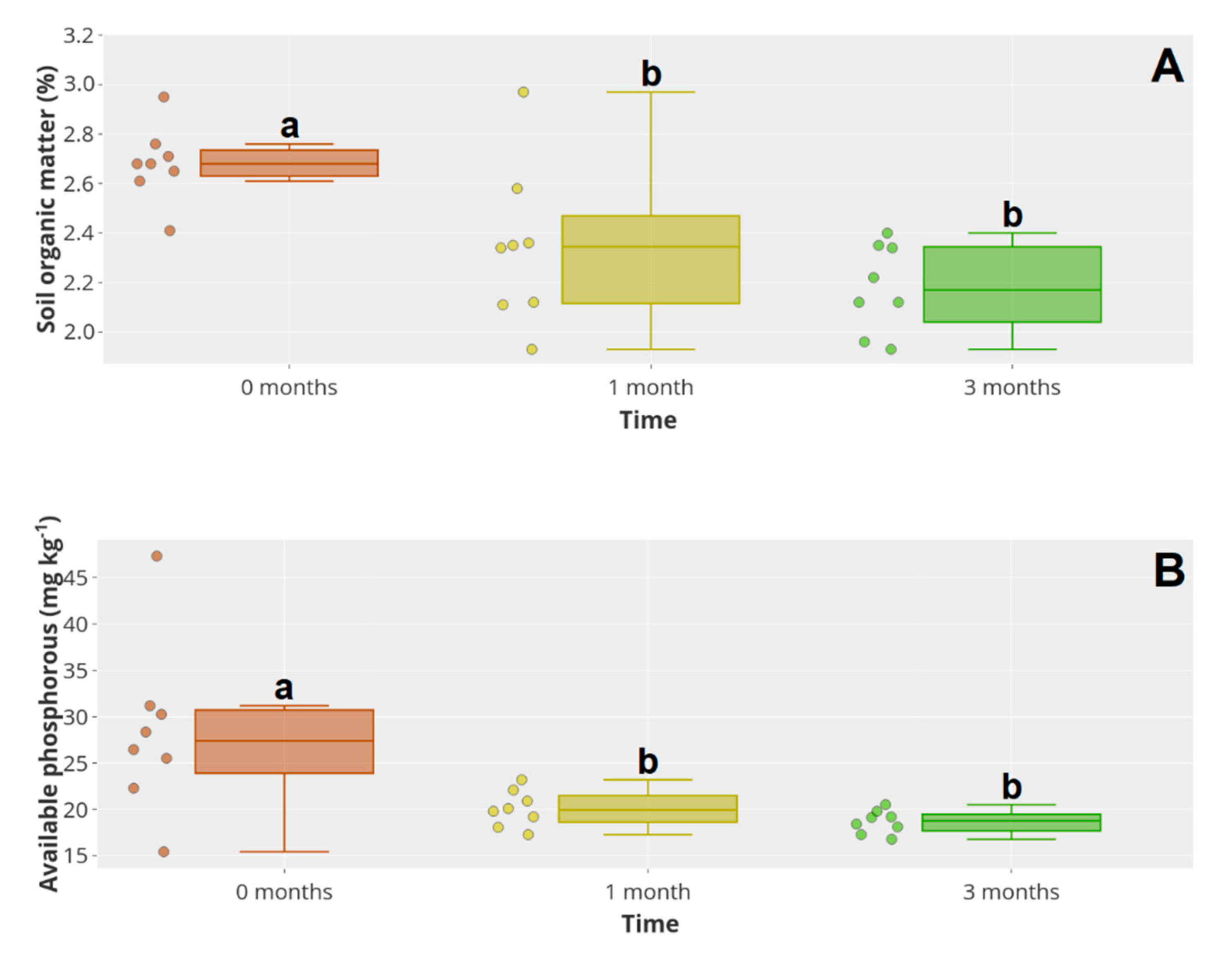 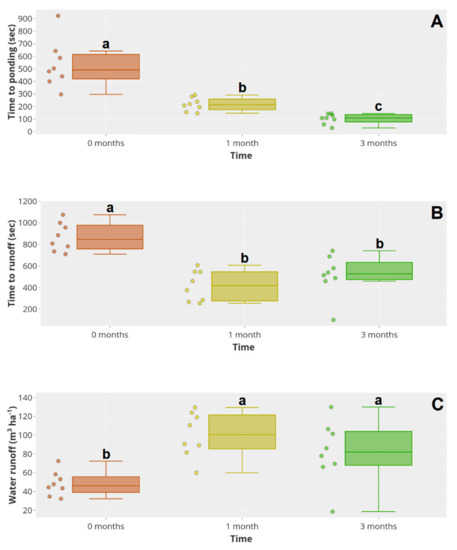 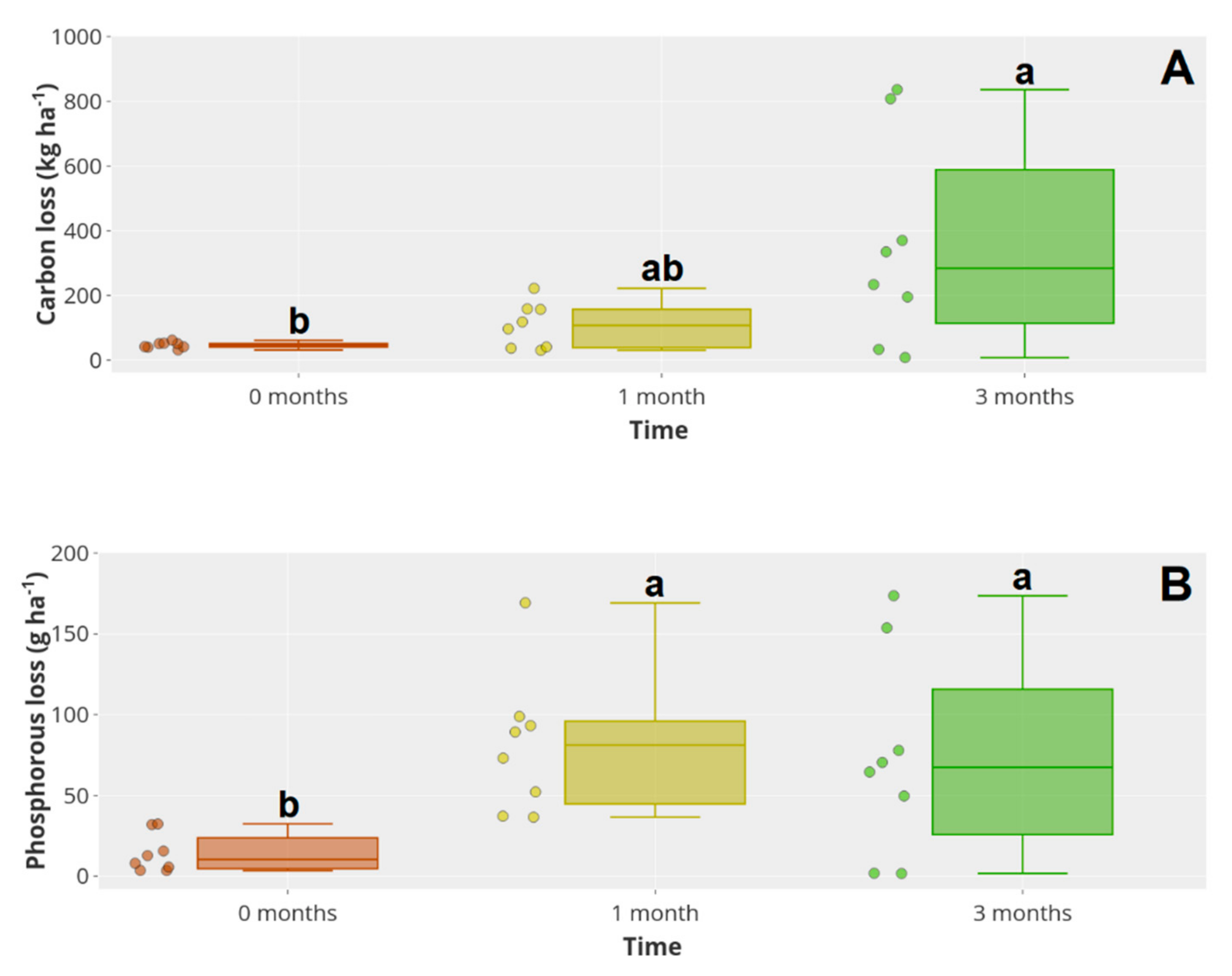 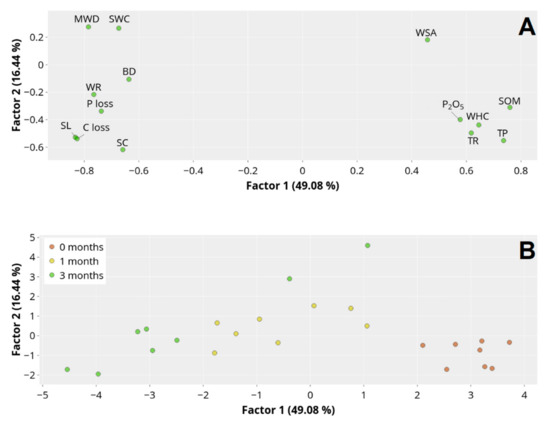