Urbanization alters natural hydrological processes and enhances runoff, which affects flood hazard. Interest in nature-based solutions (NBS) for sustainable mitigation and adaptation to urban floods is growing, but the magnitudes of NBS effects are still poorly investigated. This study explores the potential of NBS for flood hazard mitigation in a small peri-urban catchment in central Portugal, prone to flash floods driven by urbanization and short but intense rainfall events typical of the Mediterranean region. Flood extent and flood depth are assessed by manually coupling the hydrologic HEC-HMS and hydraulic HEC-RAS models. The coupled model was run for single rainfall events with recurrence periods of 10–, 20–, 50–, and 100–years, considering four simulation scenarios: current conditions (without NBS), and with an upslope NBS, a downslope NBS, and a combination of both. The model-simulation approach provides good estimates of flood magnitude (NSE = 0.91, RMSE = 0.08, MAE = 0.07, R2 = 0.93), and shows that diverting streamflow into abandoned fields has positive impacts in mitigating downslope flood hazard. The implementation of an upslope NBS can decrease the water depth at the catchment outlet by 0.02 m, whereas a downslope NBS can reduce it from 0.10 m to 0.23 m for increasing return periods. Combined upslope and downslope NBS have a marginal additional impact in reducing water depth, ranging from 0.11 m to 0.24 m for 10– and 100–year floods. Decreases in water depth provided by NBS are useful in flood mitigation and adaptation within the peri-urban catchment. A network of NBS, rather than small isolated strategies, needs to be created for efficient flood-risk management at a larger scale. View Full-Text
Keywords: flood hazard; nature-based solutions; HEC HMS model; HEC RAS model; peri-urban catchment; mediterranean flood hazard; nature-based solutions; HEC HMS model; HEC RAS model; peri-urban catchment; mediterranean
►▼ Show Figures 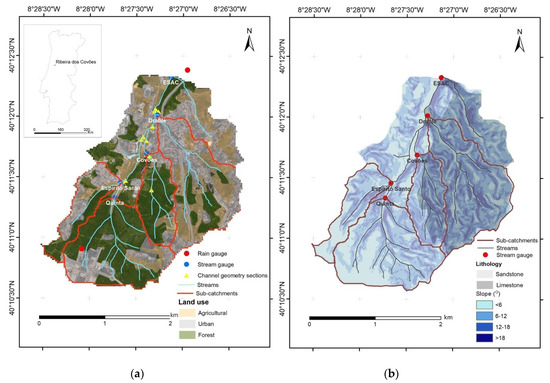