Forest management practices and droughts affect the assemblages of carabid species, and these are the most important factors in terms of influencing short- and long-term population changes. During 2017 and 2018, the occurrences and seasonal dynamics of five carabid species (Carabus coriaceus, C. ulrichii, C. violaceus, C. nemoralis and C. scheidleri) in four oak hornbeam forest stands were evaluated using the method of pitfall trapping. The climate water balance values were cumulatively calculated here as cumulative water balance in monthly steps. The cumulative water balance was used to identify the onset and duration of drought. The number of Carabus species individuals was more than three times higher in 2018 than in 2017. Spring activity was influenced by temperature. The extremely warm April in 2018 accelerated spring population dynamics; however, low night temperatures in April in 2017 slowed the spring activity of nocturnal species. Drought negatively influenced population abundance, and the effect of a drought is likely to be expressed with a two-year delay. In our investigation, a drought in 2015 started in May and lasted eight months; however, the drought was not recorded in 2016, and 2016 was evaluated as a humid year. The meteorological conditions in the year influenced seasonal activity patterns and the timings of peaks of abundance for both spring breeding and autumn breeding Carabus species. View Full-Text
Keywords: Carabus; Báb; seasonal activity; abundance; recovering forest stand; climate; drought Carabus; Báb; seasonal activity; abundance; recovering forest stand; climate; drought
►▼ Show Figures 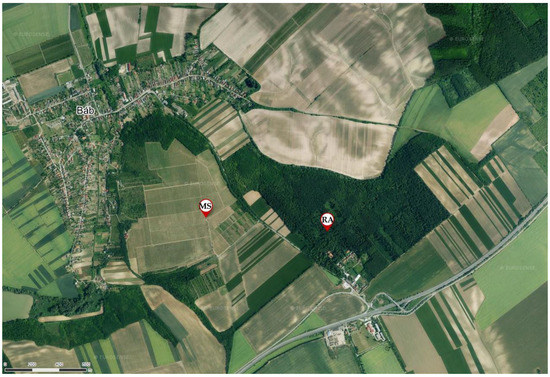