Silicon (Si) is found in various fractions of soil, depending on the pedogenic processes of the environment. Dissolved Si (DSi) is adsorbed in soil particles or leaches through the soil profile into the groundwater. The objective of this study is to quantify, using the sequential extraction method, the different Si fractions in volcanic ash soils on Jeju Island that may affect groundwater Si content, and to compare them with those in forest soils on mainland Korea. Most of the Si in these soils was bound in unavailable forms as primary and secondary silicates. The second largest proportion of Si in the non-Andisols of Jeju Island and Korean mainland soils was accumulated as amorphous Si, while in the Andisols of Jeju Island, the second most significant Si fraction was in pedogenic oxides and hydroxides. The products of these soil formations were short-range-order minerals such as allophane (4–40%). The adsorbed Si concentration tended to increase at lower depths in Andisols (100–1400 mg kg−1) and was approximately five times higher than that in non-Andisols. The results indicate that Si is more soluble in the Andisols of high precipitation regions and that Andisols on Jeju Island potentially affect groundwater Si concentration. View Full-Text
Keywords: allophane; Andisol; readily soluble silicon; sequential silicon extraction allophane; Andisol; readily soluble silicon; sequential silicon extraction
►▼ Show Figures 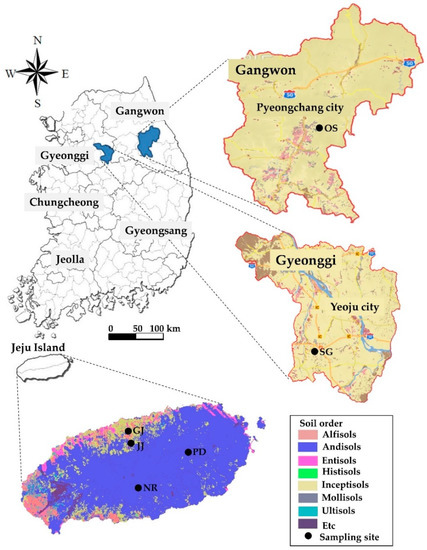