On Some Properties of the Glacial Isostatic Adjustment Fingerprints

Along with density and mass variations of the oceans driven by global warming, Glacial Isostatic Adjustment (GIA) in response to the last deglaciation still contributes significantly to present-day sea-level change. Indeed, in order to reveal the impacts of climate change, long term observations at tide gauges and recent absolute altimetry data need to be decontaminated from the effects of GIA. This is now accomplished by means of global models constrained by the observed evolution of the paleo-shorelines since the Last Glacial Maximum, which account for the complex interactions between the solid Earth, the cryosphere and the oceans. In the recent literature, past and present-day effects of GIA have been often expressed in terms of fingerprints describing the spatial variations of several geodetic quantities like crustal deformation, the harmonic components of the Earth’s gravity field, relative and absolute sea level. However, since it is driven by the delayed readjustment occurring within the viscous mantle, GIA shall taint the pattern of sea-level variability also during the forthcoming centuries. The shapes of the GIA fingerprints reflect inextricable deformational, gravitational, and rotational interactions occurring within the Earth system. Using up-to-date numerical modeling tools, our purpose is to revisit and to explore some of the physical and geometrical features of the fingerprints, their symmetries and intercorrelations, also illustrating how they stem from the fundamental equation that governs GIA, i.e., the Sea Level Equation. View Full-Text
Keywords: Glacial Isostatic Adjustment; sea level change; fingerprints of past ice melting Glacial Isostatic Adjustment; sea level change; fingerprints of past ice melting
►▼ Show Figures 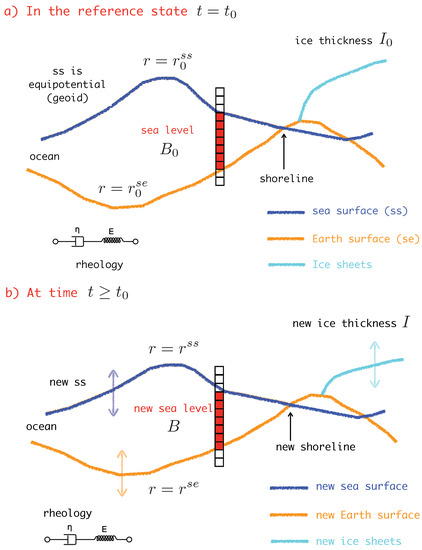