Hotel Water Demand: The Impact of Changing from Linear to Increasing Block Rates
Next Article in Special Issue

The change in both streamflow and baseflow in urban catchments has received significant attention in recent decades as a result of their drastic variability. In this research, effects of climate variation and dynamics of land use are measured separately and in combination with streamflow and baseflow in the Little Eagle Creek (LEC) watershed (Indianapolis, Indiana). These effects are examined using land-use maps, statistical tests, and hydrological modeling. Transition matrix analysis was used to investigate the change in land use between 1992 and 2011. Temporal trends and changes in meteorological data were evaluated from 1980–2017 using the Mann–Kendall test. Changes in streamflow and baseflow were assessed using the Soil and Water Assessment Tool (SWAT) hydrological model using multiple scenarios that varied in land use and climate change. Evaluation of the model outputs showed streamflow and baseflow in LEC are well represented using SWAT. During 1992–2011, roughly 30% of the watershed experienced change, typically cultivated agricultural areas became urbanized. Baseflow is significantly affected by the observed urbanization; however, the combination of land and climate variability has a larger effect on the baseflow in LEC. Generally, the variability in the baseflow and streamflow appears to be heavily driven by the response to climate change in comparison to variability due to altered land use. The results reported herein expand the current understanding of variation in hydrological components, and provide useful information for management planning regarding water resources, as well as water and soil conservation in urban watersheds in Indiana and beyond. View Full-Text
Keywords: urbanization; climate variability; streamflow; baseflow; SWAT model; Little Eagle Creek urbanization; climate variability; streamflow; baseflow; SWAT model; Little Eagle Creek
►▼ Show Figures 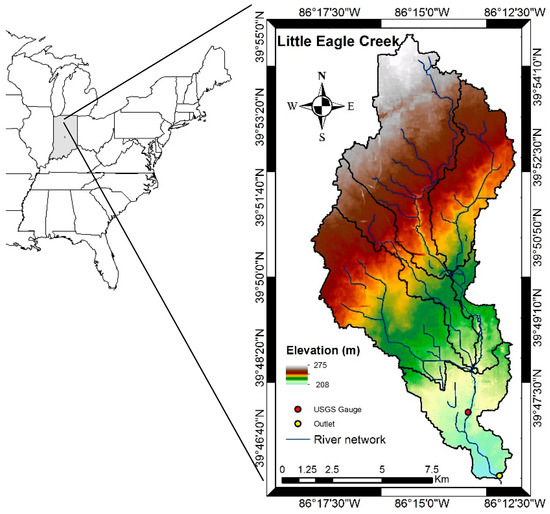