Effects of Artificial LED Light on the Growth of Three Submerged Macrophyte Species during the Low-Growth Winter Season: Implications for Macrophyte Restoration in Small Eutrophic Lakes

Eutrophication of lakes is becoming a global environmental problem, leading to, among other things, rapid reproduction of phytoplankton, increased turbidity, loss of submerged macrophytes, and the recovery of these plants following nutrient loading reduction is often delayed. Artificial light supplement could potentially be a useful method to help speeding up recovery. In this study, three common species of submerged macrophytes, Vallisneria natans, Myriophyllum spicatum and Ceratophyllum demersum, were exposed to three LED light treatments (blue, red and white) and shaded (control) for 100 days (from 10 November 2016 to 18 January 2017) in 12 tanks holding 800 L of water. All the three LED light treatments promoted growth of the three macrophyte species in terms of shoot number, length and dry mass. The three light treatments differed in their effects on the growth of the plants; generally, the red light had the strongest promoting effects, followed by blue and white. The differences in light effects may be caused by the different photosynthetic photon flux density (PPFD) of the lights, as indicated by an observed relationship of PPFD with the growth variables. The three species also responded differently to the light treatments, V. natans and C. demersum showing higher growth than M. spicatum. Our findings demonstrate that artificial light supplement in the low-growth winter season can promote growth and recovery of submerged macrophytes and hence potentially enhance their competitiveness against phytoplankton in the following spring. More studies, however, are needed to elucidate if LED light treatment is a potential restoration method in small lakes, when the growth of submerged macrophytes are delayed following a sufficiently large external nutrient loading reduction for a shift to a clear macrophyte state to have a potential to occur. Our results may also be of relevance when elucidating the role of artificial light from cities on the ecosystem functioning of lakes in urban areas. View Full-Text
Keywords: submerged macrophytes; photosynthetic photon flux density; artificial light supplement; growth; eutrophication submerged macrophytes; photosynthetic photon flux density; artificial light supplement; growth; eutrophication
►▼ Show Figures 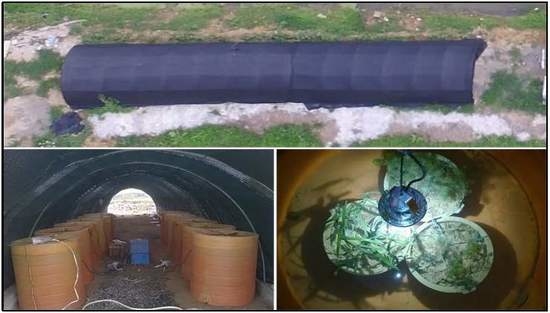