Stable Isotope Analysis and Persistent Organic Pollutants in Crustacean Zooplankton: The Role of Size and Seasonality
Previous Article in Journal

Populations dynamics of key zooplankton species in the European Arctic, Calanus finmarchicus and Calanus glacialis (hereafter defined as Calanus) may be sensitive to climate changes, which in turn is of great importance for higher trophic levels. The aim of this study was to investigate the complete copepodite structure and dynamics of Calanus populations in terms of body size, phenology and their relative role in the zooplankton community over time in different hydrographic conditions (two fjords on the West Spitsbergen Shelf, cold Hornsund vs. warm Kongsfjorden), from the perspective of their planktivorous predator, the little auk. High-resolution zooplankton measurements (taken by nets and a laser optical plankton counter) were adapted to the timing of bird’s breeding in the 2015 and 2016 summer seasons, and to their maximal diving depth (≤50 m). In Hornsund, the share of the Calanus in zooplankton community was greater and the copepodite structure was progressively older over time, matching the little auks timing. The importance of Calanus was much lower in Kongsfjorden, as represented mainly by younger copepodites, presumably due to the Atlantic water advections, thus making this area a less favourable feeding ground. Our results highlight the need for further studies on the match/mismatch between Calanus and little auks, because the observed trend of altered age structure towards a domination of young copepodites and the body size reduction of Calanus associated with higher seawater temperatures may result in insufficient food availability for these seabirds in the future. View Full-Text
Keywords: population dynamics; size; match-mismatch; Spitsbergen; laser optical plankton counter population dynamics; size; match-mismatch; Spitsbergen; laser optical plankton counter
►▼ Show Figures 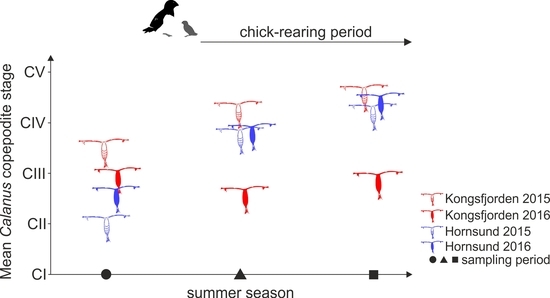