This study explores the feasibility of implementing five hybrid coagulation-membrane processes for the treatment of the boiler blow-down (BBD) water from an oil sands steam assisted gravity drainage (SAGD) operation. The processes involved (1) direct nanofiltration (NF) of the BBD water, (2) pre-treatment of the NF retentate using ion exchanger regeneration wastewater (IERW) as a chemical coagulant followed by NF, (3) pre-treatment of BBD water using IERW followed by NF, (4) dual pre-treatment of BBD water using IERW and soda ash (sodium carbonate, Na2CO3) followed by NF, and (5) forward osmosis (FO) treatment of the BBD water using IERW as a draw solution followed by NF treatment of diluted draw solution. These scenarios were compared based on total flux decline ratio (DRt), flux recovery ratio (FRR), and total dissolved solids (TDS) removal over the final NF treatment to suggest an efficient treatment technique to avoid an undesired increase in the capital and operating expenses. It was found that process-1 provided the highest selectivity toward dissolved solids (80%) with a flux decline and recovery ration of 89.6% and 97.4%, respectively. Considering the permeation flux, process-4 exhibited the lowest flux decline (86.1%) and highest recovery ratio (97.5%) compared to other processes, proving the successful role of soda ash softening, as a chemical pretreatment method, in improving the performance of membrane filtration. Process-2 presented a mediocre performance with DRt, FRR, and TDS rejection of 93.3%, 97.3%, and 74%, respectively. Finally, process-3 and process-5 showed the lowest performance among all the scenarios with low flux recovery and low permeability, respectively. In addition, process-3 was expected to be cost-efficient since it only uses an on-site generated waste as a coagulant for the chemical pretreatment of the membrane filtration unit. The optimum scenario was proposed to be the two-stage membrane process, with direct NF of BBD followed by the post-treatment of the retentate via a hybrid chemical conditioning using IERW and soda ash softening, followed by a second NF. Overall, this integrated process offered a highly efficient mean with a zero liquid discharge (ZLD) system for the treatment of high pH wastewaters into an uncontaminated stream for the boilers. View Full-Text
Keywords: coagulation-membrane process; produced water treatment; boiler blowdown; SAGD; process integration; ZLD coagulation-membrane process; produced water treatment; boiler blowdown; SAGD; process integration; ZLD
►▼ Show Figures 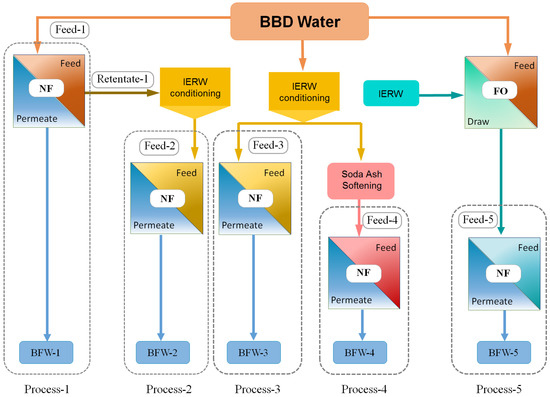