The Impacts of Water Demand and Its Implications for Future Surface Water Resource Management: The Case of Tanzania’s Wami Ruvu Basin (WRB)
Next Article in Special Issue

Many studies have projected that as the climate changes, the magnitudes of extreme precipitation events in the Northeastern United States are likely to continue increasing, regardless of the emission scenario. To examine this issue, we analyzed observed and modeled daily precipitation frequency (PF) estimates in the Northeastern US on the rain gauge station scale based on both annual maximum series (AMS) and partial duration series (PDS) methods. We employed four Coupled Model Intercomparison Project Phase 5 (CMIP5) downscaled data sets, including a probabilistic statistically downscaled data set developed specifically for this study. The ability of these four data sets to reproduce the observed features of historical point PF estimates was compared, and the two with the best historical accuracy, including the newly developed probabilistic data set, were selected to produce projected PF estimates under two CMIP5-based emission scenarios, namely Representative Concentration Pathway 4.5 (RCP4.5) and Representative Concentration Pathway 8.5 (RCP8.5). These projections indeed demonstrate a likely increase in PF estimates in the Northeastern US with noted differences in magnitudes and spatial distributions between the two data sets and between the two scenarios. We also quantified how the exceedance probabilities of the historical PF estimate values are likely to increase under each scenario using the two best performing data sets. Notably, an event with a current exceedance probability of 0.01 (a 100-year event) may have an exceedance probability for the second half of the 21st century of ≈0.04 (a 27-year event) under the RCP4.5 scenario and ≈0.05 (a 19-year event) under RCP8.5. Knowledge about the projected changes to the magnitude and frequency of heavy precipitation in this region will be relevant for the socio-economic and environmental evaluation of future infrastructure projects and will allow for better management and planning decisions. View Full-Text
Keywords: frequency estimates; downscaling; future projections; RCP4.5; RCP8.5; changing of exceedance; Northeastern US frequency estimates; downscaling; future projections; RCP4.5; RCP8.5; changing of exceedance; Northeastern US
►▼ Show Figures 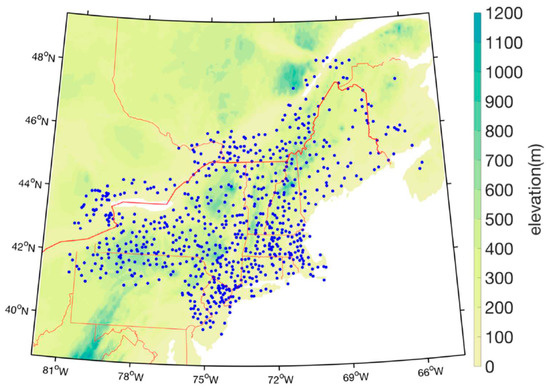