A New Framework for the Management and Radiological Protection of Groundwater Resources: The Implementation of a Portuguese Action Plan for Radon in Drinking Water and Impacts on Human Health

Uranium concentrations (a total of 82 samples) in groundwater in Icheon, middle Korea, showed a wide range from 0.02 to 1640 μg/L with a mean of 56.77 μg/L, a median of 3.03 μg/L, and a standard deviation of 228.63 μg/L. Most groundwater samples had quite low concentrations: 32.9% were below 1 μg/L, while 15.9% exceeded 30 μg/L, the maximum contaminant level (MCL) of the US EPA (Environmental Protection Agency). Radon concentrations also ranged widely from 1.48 to 865.8 Bq/L. Although the standard deviation of radon was large (151.8 Bq/L), the mean was 211.29 Bq/L and the median was 176.86 Bq/L. Overall, 64.6% of the samples exceeded the alternative maximum contaminant level (AMCL) of the US EPA (148 Bq/L). According to statistical analyses, there was no close correlations between uranium and radon, but there were correlations between uranium and redox potential (Eh) (−0.54), dissolved oxygen (DO) (−0.50), HCO3− (0.45), Sr (0.65), and SiO2 (−0.44). Radon showed independent behavior with respect to most components in groundwater. Uranium concentrations in groundwater increased with increasing water–rock interactions. Anomalously high uranium and radon concentrations in groundwater are preferentially localized in granite areas and spatial distributions are remarkably heterogeneous. View Full-Text
Keywords: uranium; groundwater; radon; statistical analyses; water–rock interactions uranium; groundwater; radon; statistical analyses; water–rock interactions
►▼ Show Figures 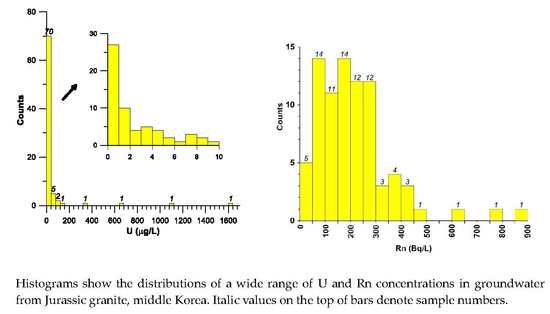