Analysis of Migration of Polycyclic Aromatic Hydrocarbons from Sewage Sludge Used for Fertilization to Soils, Surface Waters, and Plants

The BSRW is located in the center of the Mississippi Delta, in Mississippi, USA, between latitudes 31°and 35° north and longitudes 91°and 92° east (Figure 1). BSRW covers an area of approximately 10,877 km2 [25,26]. BSRW is classified as a humid subtropical climate with an average annual rainfall of 1300 mm, annual evapotranspiration of 800 mm, and average temperature of 18. More information on climate data can be seen in Table 1. Composed of fertile soils, long growing seasons and high average annual rainfall, this region is an important crop production area in Mississippi, and mainly includes soybean, corn, rice and cotton, which account for over 80% of the total land use area in this watershed [25,27]. Parajuli and Jayakody [26] reported that there are 11 rivers located in the Big Sunflower River Watershed, and the major river is Big Sunflower River which had a drainage area of approximately 280 to 6733 km2 [25]. Ouyang [19] also reported that some farm ponds have been built over the past years for agriculture irrigation due to the dramatic decline in the groundwater table.

In a previous study, Dakhlalla et al. [27] successfully utilized the SWAT model in the Big Sunflower River Watershed. The inputs required by SWAT are digital elevation model (DEM), land use data, soil properties, and weather data. The DEM was obtained from United States Geological Survey (USGS) (https://viewer.nationalmap.gov/basic/). The land use data in 2016 can be found from United States Department of Agriculture-National Agriculture Statistics Service (NASS) (https://nassgeodata.gmu.edu/CropScape). Soil data were downloaded from Natural Resources Conservation Service of the United States Department of Agriculture (NRCS) (https://www.nrcs.usda.gov/wps/portal/nrcs/main/ms/soils/surveys/), and weather data (daily maximum and minimum air temperatures, solar radiation, relative humidity, and wind speed) between 2000 and 2016 were obtained from the NRCS SSURGO database. The Big Sunflower River Watershed was divided into 23 sub-basins by the digital elevation model. The parameters required by the model related to this study were calibrated and validated using the observed data of streamflow and groundwater level [27]. The performance of the SWAT was acceptable and thus the calibrated and validated SWAT model was applied in this study for determining the weekly potential amount of surface water available for irrigation. One of the objectives of this study is to quantify the available weekly surface water resources for irrigation. The previous study has already calibrated and validated the SWAT model by using the streamflow data and ET data; therefore, SWAT can be used to estimate surface water resources (include water in stream and pond).

The irrigation requirements for soybean, corn and cotton were obtained from Tang et al. [5]. Tang et al. [5] employed the RZWQM2 model and determined the irrigation demand of soybean, corn and cotton taking into consideration weather conditions in the previous 100 years in the Mississippi Delta. Their results of weekly irrigation demand of the three crops were compiled and summarized in Table 2. The rice required irrigation amount was obtained from Yazoo Mississippi Delta Joint Water Management District [33].

Weekly rainfall, SWR, PWR, SE, ST, and PE for BSRW from April to October is shown in Figure 2. Rainfall, SWR, SE, and ST ranged from 20.4 to 29.4 mm, 7.4 to 14.4 mm, 1.6 to 4.5 mm, and 1.1 to 1.6 mm, respectively. PWR and PE ranged from 1.9 to 2.1 mm and 0.3 to 0.5 mm. Our results indicated that weekly SWR were higher in April, May and October than in the other months. This might be caused by the relatively higher rainfall in April, May and October. Figure 3 and Figure 4 showed averaged weekly SWRP and PWRP in each sub-basin from April to October in BSRW. In April (Figure 3a) and May (Figure 3b), the average weekly SWRP for the entire BSRW were 8.0 and 8.3 mm, but decreased to 4.8 mm in June (Figure 3c) and July (Figure 3d); with the coming month of August (Figure 3e), SWRP had been reduced to the lowest value of 4.7 mm. However, the average weekly SWRP for the entire BSRW has increased to 7.9 mm in October (Figure 3g). Figure 4h also showed that the average weekly PWRP of each sub-basins during the growing season ranged from 0.2 to 5.3 mm, of which the three highest values were obtained in sub-basin 17 (4.1 mm), 15(4.4 mm) and 23 (5.3 mm), while the three lowest value were obtained in sub-basin 4 (0.2 mm), sub-basin 7 (0.6 mm) and sub-basin 2, 20 (0.7 mm). In general, SWRP and PWRP differ by sub-basins and month; this might be caused by the amount of irrigation caused by the landuse in each sub-basin. In sub-basin 1 to 13, the area of rice accounted for nearly 70% of the total rice area in BSRW, which consumes much more water for irrigation, therefore, SWRP and PWRP were less in these sub-basins. Our results indicated that the values of SWRP and PWRP are positive and there was net surface water available in this region.

3.3. Potential Available Amount of Surface Water as An Alternative to Groundwater for Irrigation

Figure 7 shows the percent of weekly groundwater use for irrigation that could be replaced by surface water (Pgs) in each sub-basin every month. In general, the Pgs of each sub-basin ranged from 10% to 87% from May to September. Our results indicated that there was potential to reduce the groundwater use in BSRW if weekly ASWRR were used for irrigation. The average Pgs for the entire BSRW were 46% in May, 23% in June, 21% in July, 35% in August, and 56% in September. Although the surface water resources were not sufficient for maintain the irrigation demands in BSRW (Figure 5), it can be used as an alternative irrigation source for reducing the groundwater use. Reducing groundwater pumping and increasing surface water use for irrigation might be a sustainable way to mitigate the intensity of groundwater use stress [41]. Bredehoeft and Young [42] also reported that conjunctive use of surface and groundwater for agriculture irrigation is a practical strategy for sustainable groundwater planning and management. Therefore, conjunctive use of both surface and groundwater might be a solution to mitigate water resources scarcity. Butler et al. [43] developed a new and simple water balance model to assess the future trend of the aquifer of Kansas over the short and medium term and found that a reduction in annual pumping of 22% groundwater can maintain the annual averaged groundwater level. Barow and Clark [9] employed the MODFLOW model to simulate the effectiveness of different groundwater conservation scenarios in maintaining the groundwater level in Mississippi Delta. They found that a 25% reduction of groundwater use resulted in the greatest increase in groundwater storage. However, these results resulted from reduction scenarios on an annual basis, which is not able to meet growers’ needs for scheduling irrigation on a weekly basis [22]. Our results were calculated on a weekly basis for each sub-basin in BSRW, which is helpful for farmers to schedule their irrigation strategy. In addition, these research results were obtained for the entire watershed; they are not accurate enough to aid irrigation scheduling for growers in each sub-basin. Therefore, farmers in different sub-basins can use our results to make a decision on how much surface and groundwater will be used for irrigation during the growing seasons.

This work was completed in the Genetics and Sustainable Agriculture Research Unit, USDA-ARS as a visiting Ph.D candidate sponsored by the China Scholarship Council (No. 201606040138) and Mississippi Soybean Promotion Board (62-2019). 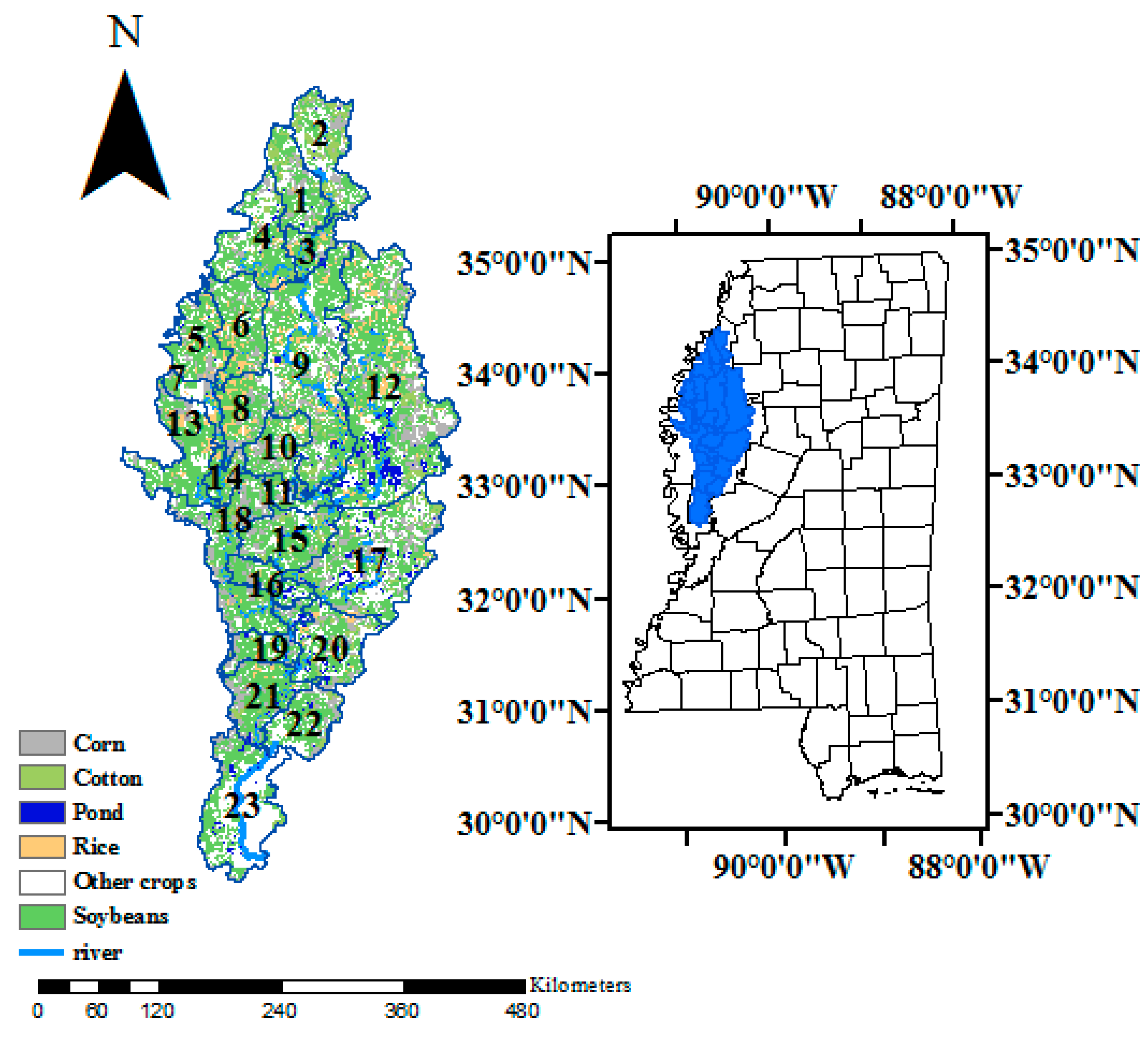 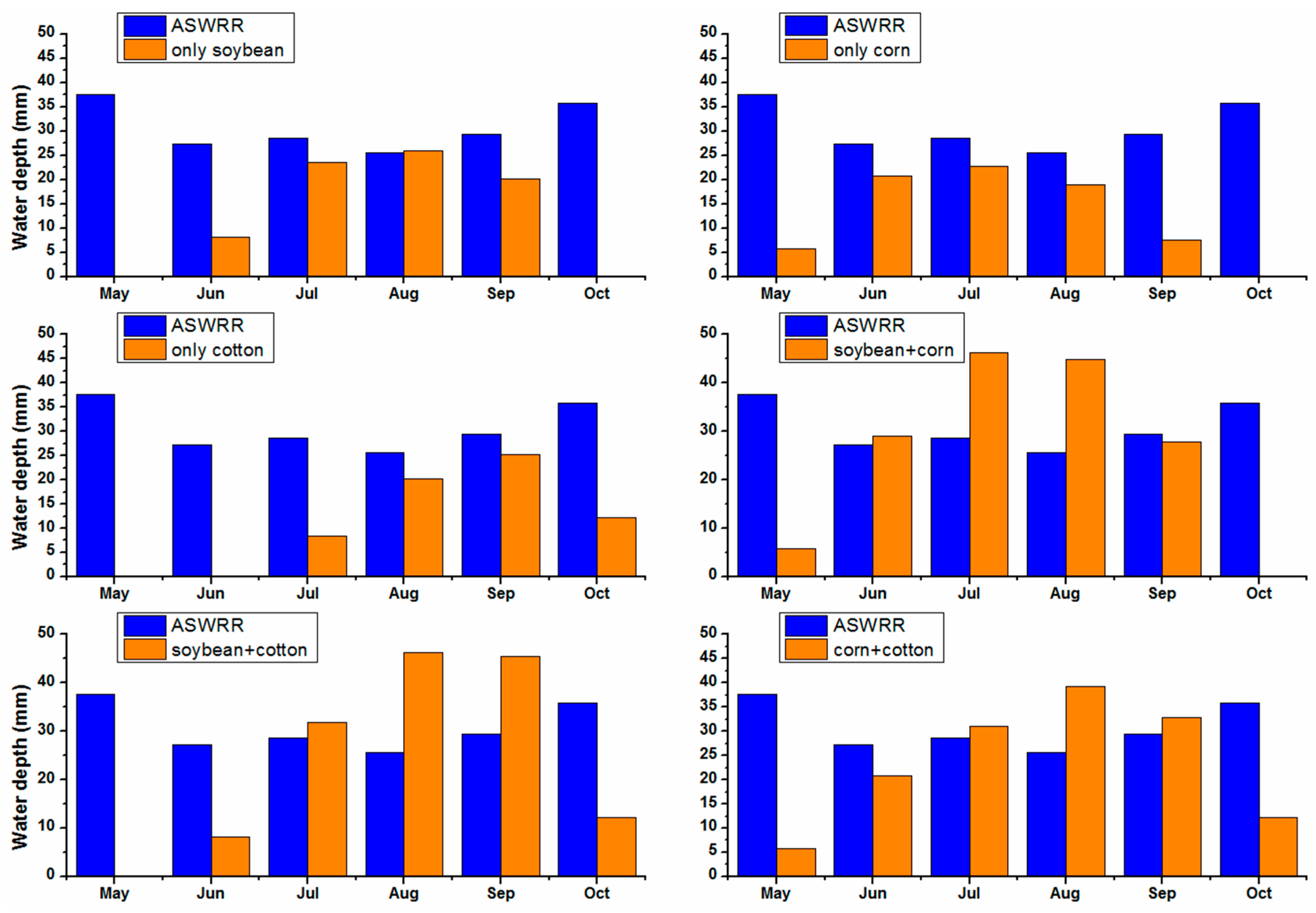