Assessment of Potential Toxic Metals in a Ramsar Wetland, Central Mexico and its Self-Depuration through Eichhornia crassipes
Next Article in Special Issue

This study aims to contribute to the limited knowledge on the bio-ecological traits of the native Western tubenose goby, Proterorhinus semilunaris, which is considered to invade many inland waters in Europe and North America. During monthly sampling surveys from March 2012 to June 2013, the species was collected from the four stations in the Istranca River (Turkey) by electrofishing. The standard length and body weight of 310 samples varied between 1.4–6.1 cm and 0.08–7.09 g, respectively. The sex ratio of female to male was found to be 1.7:1.0, with a significant difference. The values of the exponent b in the length–weight relationship were approximately 3 for females, males, and all individuals, indicating an isometric growth. The size at first sexual maturity was 2.44 cm standard length (SL) for females and 2.29 cm SL for males. Absolute fecundity ranged from 56 to 344 eggs with a mean of 164 eggs. The food composition of the species comprised of 8 major groups: Insecta (Diptera, Ephemeroptera, Plecoptera, Odonata, Trichoptera, Coleoptera), Arachnida, Annelida, Gastropoda, Crustacea, Pisces, plant, and detritus. According to the results of modified index of relative importance (MI) and index of relative importance (IRI), insect and Diptera were the most prevalent prey for this fish. The present study has provided baseline information on the basic biological traits of the fish in its natural habitat for further understanding of this species success of invasion. View Full-Text
Keywords: native; growth; reproduction; feeding; invader native; growth; reproduction; feeding; invader
►▼ Show Figures 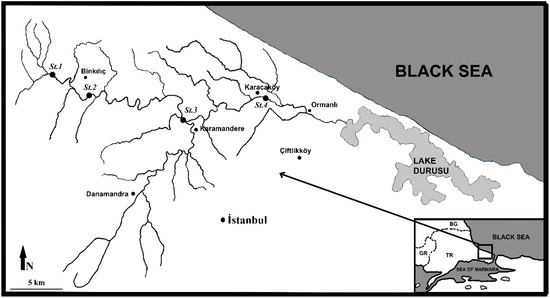