Performance Simulation and Assessment of an Appropriate Wastewater Treatment Technology in a Densely Populated Growing City in a Developing Country: A Case Study in Vientiane, Laos

:
Many sewage treatment facilities in China have been developed and operated using the Public-Private Partnerships (PPP) model. However, a big challenge faced by these PPP projects is that the subsidy requested from the government during the operation is normally higher than what was estimated originally, thus often exceeding the budget that the government can afford. This leads to a high risk of project failure or insufficient operation. This problem is largely caused by the uncertainties exhibited in the existing models, such as the Black-Scholes (BS) model. While being used in the budget estimation, these models cannot sufficiently account for the short-term uncertainty that may be incurred during the operation of projects. In this study, a method to account for this short-term uncertainty has been proposed to improve the BS model. This allows for investigations to address issues related to how the real option value of a government subsidy is affected. A Monte Carlo simulation was performed to take into account the noise in the estimation. A sensitivity analysis further revealed that this discrepancy is largely affected by the values of the relevant parameters in the short-term uncertainty model. We found that the short-term uncertainty has a significant effect on private revenue and government subsidy and that the changes of the latter are more sensitive to the change of short-term uncertainty. The value of the relevant variables of short-term uncertainty determined the fluctuation of the revenue. The mean value and revenue had a positive correlation. The reverting speed and revenue showed a negative correlation. The short-term volatility had a positive correlation toward the fluctuation range of the revenue. The simulation results indicate that this enhanced method can produce more accurate information for a better assessment of the PPP project under a wide range of uncertainty scenarios, allowing for the best decision making by the government.
Keywords:
public-private partnerships; real options; short-term uncertainty; mean reversion; decision-making

The revenue of a typical PPP project is a combined result of the MRG (minimum revenue subsidy) and ERS (excess revenue sharing mechanisms) [30,31]. This mechanism balances the profit of projects by providing the private sector support against revenue risks borne from low revenue and giving the government the right to capture the excess revenue [32]. When the revenue fluctuates wildly, the MRG and ERS mechanisms can improve welfare by sharing the risks. In practice, the two parties will negotiate to determine terms that are mutually agreeable.
As shown in Figure 1, if the sewage treatment revenue in the year t is below the lower threshold , the government provides a subsidy to cover the shortfall. The subsidy given to the private sector will then be . If the sewage treatment revenue in the year t is higher than the upper threshold , the government will gain the excess revenue . The mathematical expression of the effective revenue for the private sector in the year t is described in Equation (1) [33]. where, , is the level of subsidy, is the unit price of the sewage treatment, and is the benchmark revenue.
The revenue in year t can be computed as follows: where is the operation and maintain costs; is the Construction cost; is the construction period; is the operation period; and is the th year of the operation period. r is the benchmark discount rate of industry.
Similarly, the government subsidy in the year t can be expressed below:
The government subsidy can be considered as a set of independent European options which should be exercised at the end of the year. The gross value of the government subsidy over the whole period can be calculated in Equation (4): where is the construction period and is the operation period. is the th year of the operation period.
The most popular way to simulate the motion of real asset value under long-term uncertainty is to use a BS model [33,34].
Let represent the theoretical value on the condition of a complete and efficient market without noise. It is assumed that the value of the asset follows a lognormal stochastic process. It can be described mathematically as follows [35]: where is the increment in revenue during a short period of time , is the revenue growth rate in a short period of time , and is the long-term volatility of the annual growth rate of revenue. and are constants, is independent and identically distributed(i.i.d.) the incremental quantity from a standardized Wiener process.
For convenience, we can transform Equation (5) into a normally distributed process. The evolution of the revenue can be modeled as a function of the previous value, as shown in Equation (6):
The real sewage treatment revenue in the (t + 1)th year has a strong correlation with that of the tth year. This stochastic evolution process can be expressed in Equation (7):
This suggests that the logarithm of revenue follows a normal distribution with a mean and variance .

This section presents the noise-based option model for the case of the PPP sewage treatment project in China [41]. Hypothetical cases are commonly used for demonstration in real option literature [31,42]. In this article, we introduced some additional inputs, such as the volatility of short-term uncertainty, mean-reverting rate and mean value of noise. The values of the parameters used in the evaluation are shown in Table 1.
The construction period and operation period are 1 and 20 years respectively. The basic data-like construction cost is determined by the design, and the toll rate is determined by the local government. The expected annual growth rate of the sewage treatment value over the life of the project is 8.4%, and the long-term volatility of the annual growth rate of the sewage treatment value is 6.2%. The data-like operation and maintenance costs, annual growth rate and long-term volatility are calculated by the historical monthly cash flow data of a similar project. The discount rate is 6.9%, estimated from the relevant data of the 10-year bond yield to maturity of the local government. The mean reverting rate, short-term volatility and mean reversion value are supposed to be estimated by the cash flow data of a similar project; however, here we use the given value to make the sensitivity analysis. The mean reverting rate is 0.1, short-term volatility is 0.2 and the mean reversion value is −1.

This article’s general objective is motivated by the fact that there are significant differences between the theoretical predictions of PPP projects’ revenues and their real value.
This article identifies the effect of short-term uncertainty in the application of ROT. We focus on the study of the PPP sewage treatment revenue, which follows a mixed process of long-term uncertainty together with short-term uncertainty. The presence of short-term uncertainty complicates the valuation of the PPP sewage treatment revenue and decision making.
The simulated results show that a mean-reverting short-term uncertainty may significantly change the mean value and the distribution of revenue and government subsidy. The government subsidy is more sensitive to the change of short-term uncertainty.
The annual revenue may significantly fluctuate because of unpredicted events during the operation period. The discrepancy between the estimated revenue and the actual revenue will lead to an unprepared government subsidy, and the total subsidies may significantly deviate from the government infrastructure investment budget with the effect of the time value of money.
The government needs to take adjustment actions to maintain the stability and gradually depreciate the disturbance by short-term uncertainty to the actual revenue when there is an obvious deviation in the PPP market.
It is necessary to establish an information feedback mechanism to evaluate the accuracy of the estimation in the planning stage, and this feedback mechanism may help to make precise decisions to PPP projects by considering the level of noise caused by uncertainty and propose feasible measures to improve the subsequent operation performance.
Generally, the simulated results of this paper contribute insights that can be used to improve the BS model. The traditional B-S model might incorporate errors because of its failure to incorporate short term uncertainty. This article combines the random walk and mean reverting features of the revenue. This is a more practical approach and improves the accuracy of revenue forecasting.

Q.L. and Q.G. proposed the research ideas and methods of the manuscript. Q.L. wrote the original draft. S.W. wrote the code. Z.L and D.M.D. put forward the review and editing to the paper. F.J. is responsible for creating figures and forms.

This research was partially funded by Natural Sciences and Engineering Research Council of Canada (NSERC.DG NO.443130). 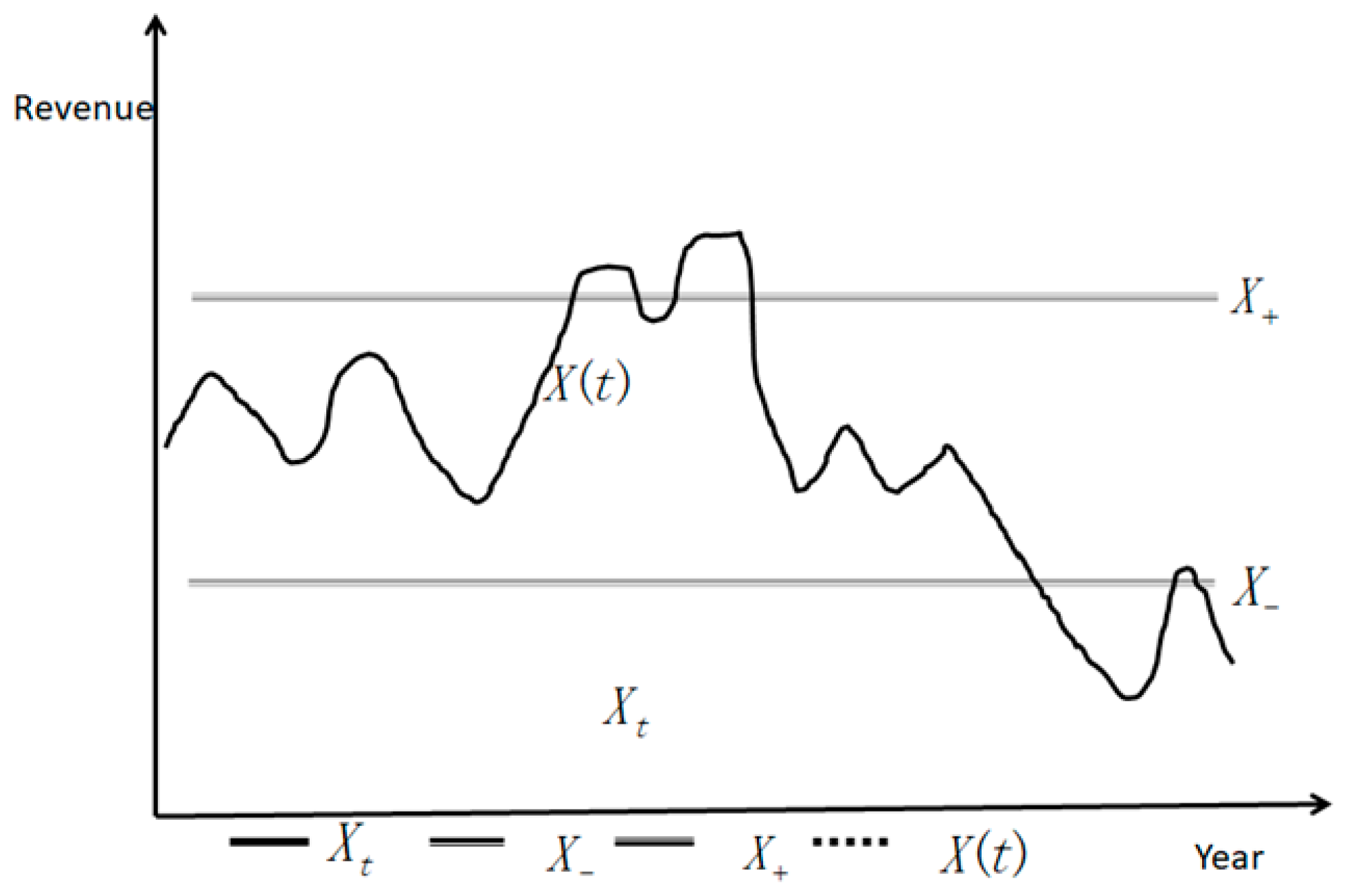 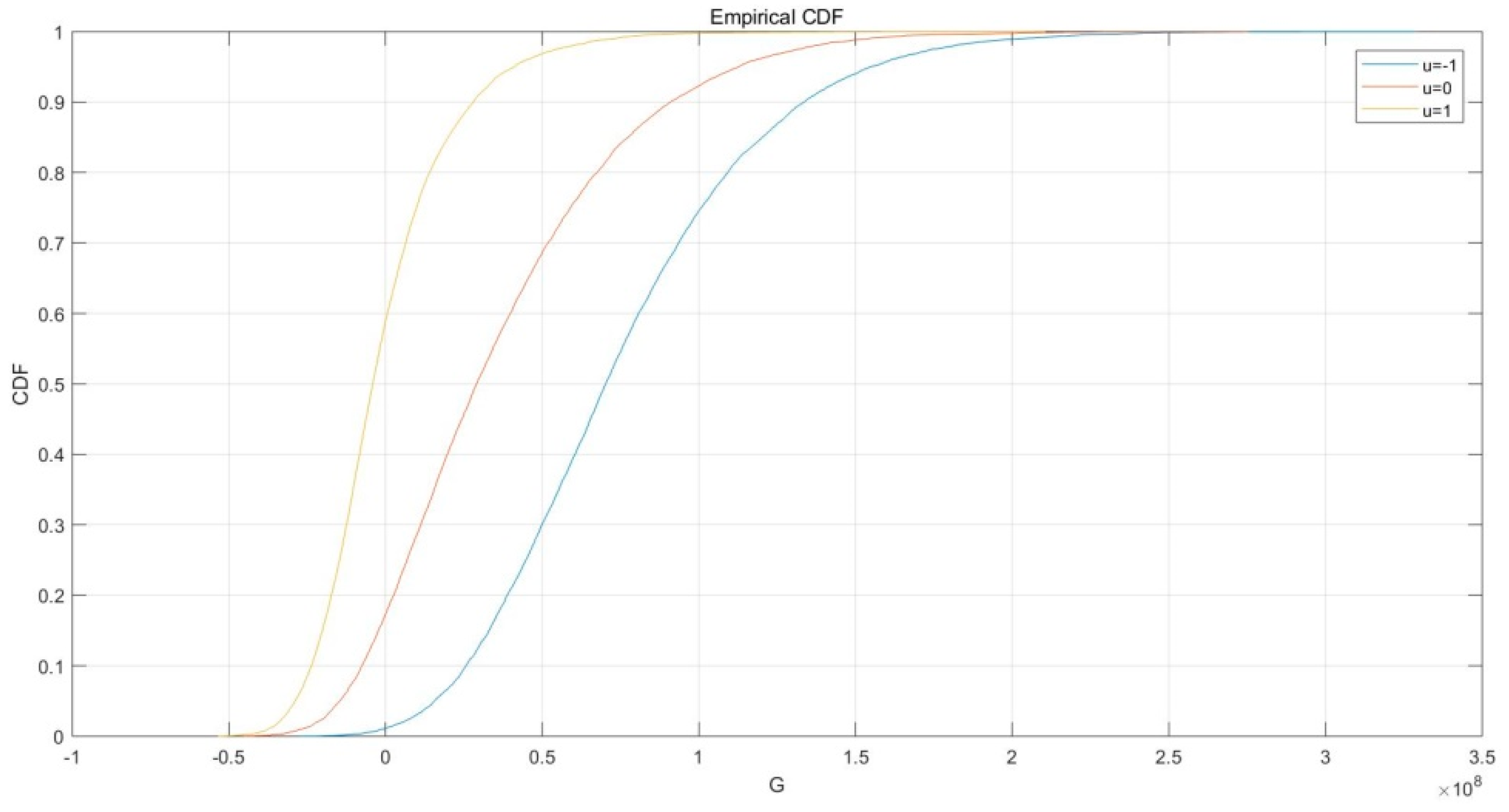