The cementation of porous media leads to the variation of the pore space and heterogeneity of the porous media. In this study, four porous media (PM1, PM2, PM3, and PM4) with the different radii of solid grains were generated to represent the different cementation degrees of the porous media. The direct simulations of flow and conservative solute transport in PM1–4 were conducted to investigate the influence of the cemented porous media and Peclet number (Pe) on the temporal mixing behavior. Two metrics, scalar dissipation rates (SDR) and dilution index, were employed to quantify the temporal mixing behavior. It was found that the spatial velocity variability of the flow field was enhanced as cementation degree increased. The results of the coefficient of velocity variation () increased from 0.943 to 2.319 for PM1–4. A network consisted of several preferential flow paths was observed in PM1–4. The preferential flow enhanced the mixing of the conservative solute but had a negative influence on the mixing of the solute plume when the cemented solid grains formed several groups, and there were some stagnant regions where the flow was almost immobile. As the Pe increased, for PM1–3, the exponent of the best-fitting power law of the global SDR decreased. At the case of Pe = 400, the slope of the global SDR reduced to around −1.9. In PM4 where the preferential flow was enhanced by the cemented solid grains, the slope of the global SDR increased as the Pe increased. The global SDR results indicated that the temporal mixing behavior followed a Fickian scaling () in the early stage (Pv < 0.05), while the mixing behavior turned to be non-Fickian in the late stage. The transition time from the Fickian scaling to the non-Fickian scaling was found to be sensitive to the cementation degree of the porous media. View Full-Text
Keywords: solute transport; simulation; porous media; mixing; groundwater solute transport; simulation; porous media; mixing; groundwater
►▼ Show Figures 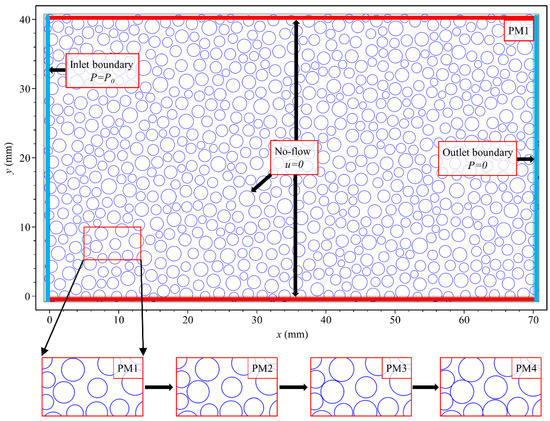