Effects of Bridge Piers on Flood Hazards: A Case Study on the Jialing River in China
Previous Article in Journal

With the improvement of short-term flood forecasting and short-term rainfall forecast accuracy, as well as the advance of hydrological and meteorological information collection and collation methods, the reservoir flood regulation method taking rainfall or inflow forecast into consideration is gaining more and more attention. As the index of Forecast-Based Operation (FBO), the forecasted factor plays an important part in determining success or failure of FBO due to its uncertainty and accuracy. In this study, possible risk sources were analyzed considering the process and the characteristics of reservoir flood regulation firstly, and the uncertainty of the forecast information and the FBO risks were discussed based on hypothesis testing. Then, combined with the case study of applying FBO on Ankang Reservoir, in which the forecasted net rainfall was selected as the index of the FBO rules, the probability distribution of the forecasted net rainfall errors was derived as the basis of risk analysis. Finally, FBO risk analysis was conducted based on Monte Carlo method for several real flood processes, while a simulation was also carried out with the Conventional Operation (CO) for contrast. The results indicate that the maximum risk was reduced more than half when FBO was adopted. Consequently, the possible remedial measures were put forward in the case of invalid forecast happened based on simulation and the analysis of the principle of flood regulation. The conclusions and methods in this research provide ideas for real-time flood regulation and risk management of reservoirs. View Full-Text
Keywords: reservoir operation; reservoir flood regulation; uncertainty analysis; risk analysis; remedies reservoir operation; reservoir flood regulation; uncertainty analysis; risk analysis; remedies
►▼ Show Figures 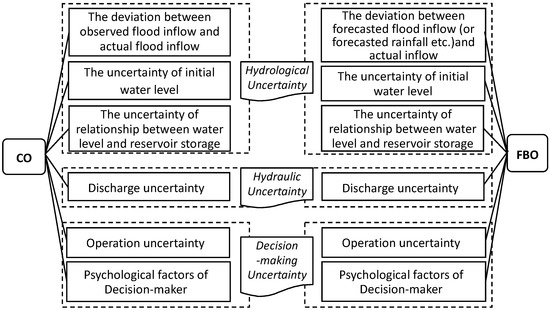