Evaluating the Impact of Wastewater Effluent on Microbial Communities in the Panke, an Urban River
Previous Article in Special Issue

Along with the need for western economic development, the number of long tunnel projects which go through mountains is constantly on the rise. In the process of construction, various disaster-causing structures are frequently exposed, which leads to many geological disasters. The traditional idea is that the reverse fault is not easily developed for an underground river, which means that the tunnel elevation design is not considered adequately. When some tunnels cross the bottom of the river, the fractures near the fault between the underground river and the excavation space may be activated and then evolve into channels, causing serious water inrush accidents during construction and operation processes. Taking the Qiyueshan Tunnel site as an example, on the premise of the anatomy of the control mechanism of the reverse fault on the development of the underground river, based on the multiperiod typical structural traces of the tunnel and surface outcrop, it was found that stratifications, dip joints, transverse joints, and tension joints of good aperture grade are important control factors. The cut block easily loses its stability and provides space for karst development, while intermittent uplifting of regional structures provides hydrodynamic conditions for the development of the underground river, causing the hydraulic gradient to be inconsistent in the overall underground river. Finally, the rainwater dynamic monitoring and tracer connectivity are data that can be fully utilized to demonstrate that a reverse fracture can control the development of the underground river. The authors further considered the effect of the vertical zoning of the fault structure and the excavation disturbance, and, drawing on the experience of the relative location of the same site in the same field, put forward the suggestion that the construction of the follow-up tunnel in the study area should be slightly higher than the elevation of the underground river. The research results can provide useful reference for similar engineering problems in the future. View Full-Text
Keywords: long tunnel; reverse fault; underground river; control mechanism; structural traces; elevation long tunnel; reverse fault; underground river; control mechanism; structural traces; elevation
►▼ Show Figures 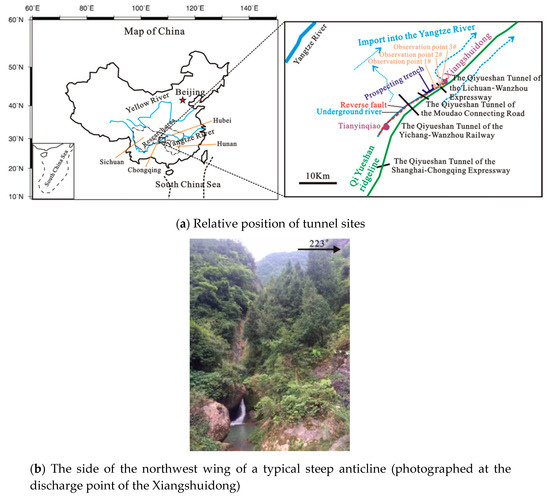