Aquatic and rheophilous bryophytes can indicate water pollution as they bioaccumulate toxic water elements. We evaluated (1) bioaccumulation of eight heavy metals and arsenic by Marchantia polymorpha L., and (2) changes in bryophyte community structure, as responses to urban pollution in southern Ecuador. To this end, we registered presence/absence and coverage of submerged bryophytes in 120 quadrats across three zones of the Zamora river inside Loja city, and a control zone in a nearby forest. We found that the concentrations of five (Al, Cd, Cu, Fe, and Zn) of the eight chemical elements and arsenic were highest in urban M. polymorpha. Moreover, bryophyte species richness decreased in urban zones. Bryophyte community structure also differed between control and city zones, but no differences were found among city zones. The control zone was composed by a more distinct set of bryophyte species, e.g., an indicator species analysis showed that 16 species had high and significant indicator values for control zone, but only 11 species were indicators of at least one of the three urban zones. We concluded that bryophytes, in general, and M. polymorpha, in particular, can be suitable biomonitors of water quality in tropical urban rivers. View Full-Text
Keywords: community structure; diversity; indicator species; Marchantia polymorpha L.; passive monitoring community structure; diversity; indicator species; Marchantia polymorpha L.; passive monitoring
►▼ Show Figures 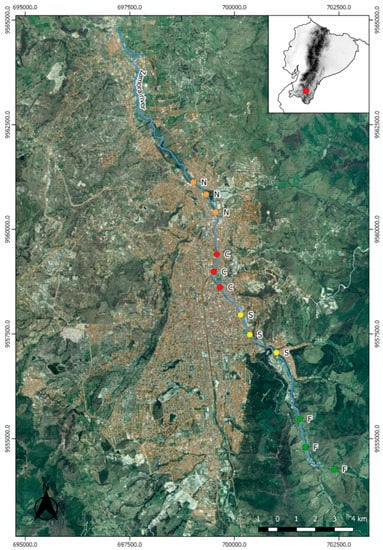