Glacier Changes in the Qilian Mountains, Northwest China, between the 1960s and 2015

Glaciers in the Qilian Mountains are important sources of fresh-water for sustainable development in the Hexi Corridor in the arid northwest China. Over the last few decades, glaciers have generally shrunk across the globe due to climate warming. In order to understand the current state of glaciers in the Qilian Mountains, we compiled a new inventory of glaciers in the region using Landsat Operational Land Imager (OLI) images acquired in 2015, and identified 2748 glaciers that covered an area of 1539.30 ± 49.50 km2 with an ice volume of 81.69 ± 7.40 km3, among which the Shule River basin occupied the largest portion of glaciers (24.8% in number, 32.3% in area, and 35.6% in ice volume). In comparison to previous inventories, glacier area was found to shrink by 396.89 km2 (20.5%) in total, and 109 glaciers with an area of 8.94 km2 disappeared over the period from the 1960s to 2015. This situation was primarily caused by the increase in air temperature, and also related with the size of glacier and some local topographic parameters. In addition, the change of glaciers in the Qilian Mountains showed a distinct spatial pattern, i.e., their shrinking rate was large in the east and small in the west. View Full-Text
Keywords: glacier changes; the Qilian Mountains; climate factors glacier changes; the Qilian Mountains; climate factors
►▼ Show Figures 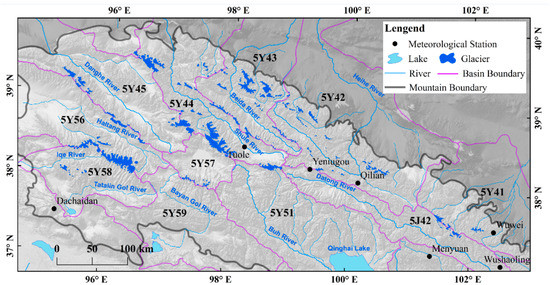