Glacier Changes in the Qilian Mountains, Northwest China, between the 1960s and 2015
Next Article in Special Issue

Comparative Study of Four TiO2-Based Photocatalysts to Degrade 2,4-D in a Semi-Passive System

In this study, the relative efficiency of four forms of supported titanium dioxide (TiO2) as a photocatalyst to degrade 2,4-dichlorophenoxyacetic acid (2,4-D) in Killex®, a commercially available herbicide was studied. Coated glass spheres, anodized plate, anodized mesh, and electro-photocatalysis using the anodized mesh were evaluated under an ultraviolet – light-emitting diode (UV-LED) light source at λ = 365 nm in a semi-passive mode. Energy consumption of the system was used to compare the efficiency of the photocatalysts. The results showed both photospheres and mesh consumed approximately 80 J/cm3 energy followed by electro-photocatalysis (112.2 J/cm3), and the anodized plate (114.5 J/cm3). Although electro-photocatalysis showed the fastest degradation rate (K = 5.04 mg L−1 h−1), its energy consumption was at the same level as the anodized plate with a lower degradation rate constant of 3.07 mg L−1 h−1. The results demonstrated that three-dimensional nanotubes of TiO2 surrounding the mesh provide superior degradation compared to one-dimensional arrays on the planar surface of the anodized plate. With limited broad-scale comparative studies between varieties of different TiO2 supports, this study provides a comparative analysis of relative degradation efficiencies between the four photocatalytic configurations. View Full-Text
Keywords: photocatalysis; semi-passive; anodization; buoyant catalyst; 2,4-D; LED; mesh photocatalysis; semi-passive; anodization; buoyant catalyst; 2,4-D; LED; mesh
►▼ Show Figures 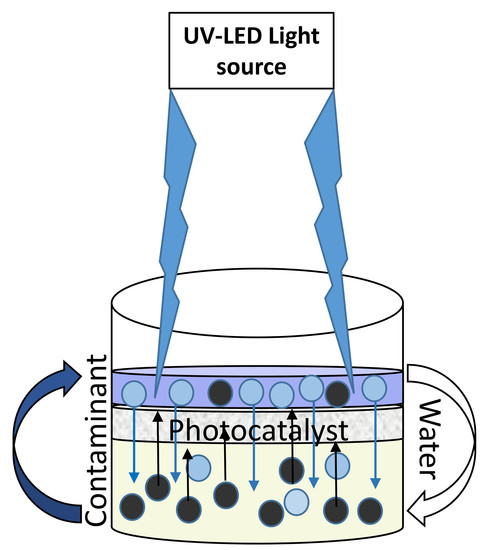