The Jinan Karst Spring System in Shandong province, China, has suffered to maintain groundwater level and spring flowing for decades. Recharge of river water to karst aquifer in Jinan is important for the outflowing of four large karst springs in the city center. Field investigations were conducted for two times in May and October, 2015, respectively and water samples were collected for hydrogeochemical and isotopic measurements. Results showed that (a) the water type was predominantly Ca-HCO3-SO4 for karst groundwater, and Ca-Mg-SO4 for river water; (b) the concentration of HCO3− and NO3− in karst groundwater were higher than that in river water, in contrast, the concentration of SO42− and K+ in karst groundwater were lower than that in river water; (c) the δ2H and δ18O values with average of −51.2‰ and −6.6‰ for river water is more enriched than the values in groundwater samples (−59.1‰ and −8.3‰), in that river experienced evaporation in the upstream reservoir; (d) Based on the distribution pattern of δ18O, groundwater near river bank was found to be recharged from river water and found a preferential flow path in karst aquifer situated from Dongkema to Manzizhuang near the river bank. This study provides useful information for understanding of the hydraulic connection between river water and karst aquifer, and benefit the protection and management of water resources. View Full-Text
Keywords: recharge; streambed; hydrogeochemistry; isotope; karst aquifer; Jinan recharge; streambed; hydrogeochemistry; isotope; karst aquifer; Jinan
►▼ Show Figures 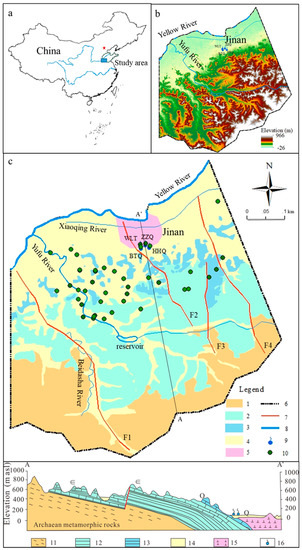