Comprehensive Utilization of Seawater in China: A Description of the Present Situation, Restrictive Factors and Potential Countermeasures

China is a maritime power. However, as its economy develops rapidly, China lacks freshwater resources. The water resources per capita are low in China and are less than a quarter of the global mean value. The development and utilization of desalination, a new unconventional water resource in coastal areas, has gradually attracted the attention of the central and local governments. This paper introduces three aspects of the comprehensive utilization of seawater in China, including the desalination of seawater, the direct use of seawater, and the use of seawater as a chemical resource. Based on the recent status (2017) of comprehensive seawater utilization in China, the prospects for optimizing the utilization of seawater resources are presented. Furthermore, the restrictive factors and potential countermeasures for the increased use of seawater desalination are investigated. Several recommendations are presented, specifically, improving the laws, using regulations and standards related to desalination, strengthening the policies that support enterprises that use desalination, gradually improving the localization rate of key technologies and equipment, and devoting additional attention to the problems associated with brine processing. Seawater is expected to become an important supplemental source of water in coastal areas of China, and the resources needed for its use will be developed as a strategic and influential industry. View Full-Text
Keywords: desalination; direct use of seawater; chemical resource; industrial cycle; countermeasures; China desalination; direct use of seawater; chemical resource; industrial cycle; countermeasures; China
►▼ Show Figures 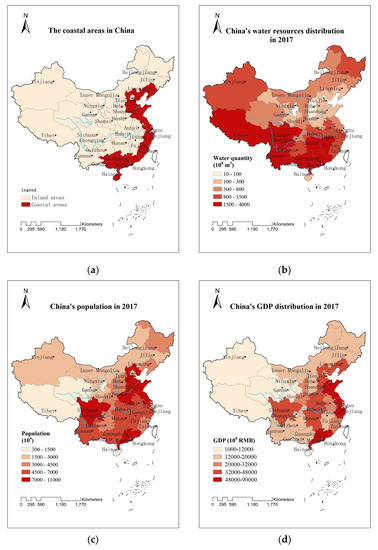