Evaluation of Health Risks Due to Heavy Metals in a Rural Population Exposed to Atoyac River Pollution in Puebla, Mexico

The health risks of Emilio Portes Gil’s population, for the exposition to the Atoyac River pollution in the State of Puebla, was evaluated. The objective was to determine the concentration of nine heavy metals by ingesting water from wells and spri ngs. The chronic daily water intake (CDI), hazard quotient (HQ), hazard index (HI), and carcinogenic risk index (CRI) in adults, teenagers, and children were estimated. The results showed that the concentration of Fe, Al, Ni, and Pb in some of the samples exceeded the recommended standards for human consumption and was significantly higher in the dry season. The hazard index (HI), due to the collective intake of metals, was higher in children (>50% compared to adults), due to the consumption of spring water in the dry season. Risk of noncancerous diseases was not detected in the long term, since the indices did not exceed the unit (reference value). The carcinogenic risk from oral exposure to Cr (CRIchildren = 3.2 × 10−4), was greater than the acceptable limit (1 × 10−6) in the water spring, and Cr and Pb were the main metals that contributed to the potential health risk of the inhabitants. The study showed the risks by the intake of polluted water from the sources of supply in the region, and that the risk is higher in the dry season (>100% compared with rainy season). View Full-Text
Keywords: water well; spring water; pollution water; risk evaluation; Atoyac river; E. Portes Gil water well; spring water; pollution water; risk evaluation; Atoyac river; E. Portes Gil
►▼ Show Figures 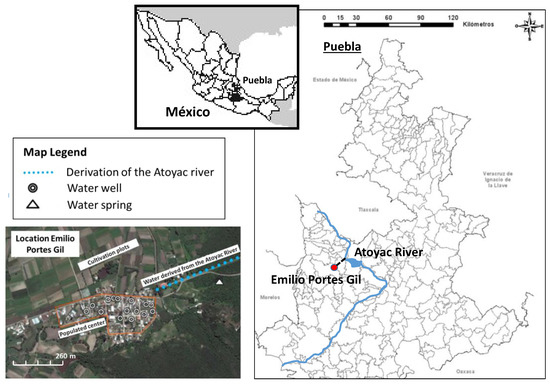