:
Flooding is among the most common natural disasters in our planet and one of the main causes of economic and human life loss worldwide. Evidence suggests the increase of floods at European scale with the Mediterranean coast being critically vulnerable to this risk. The devastating event in the West Mediterranean during the second week of September 2019 is a clear case of this risk crystallization, when a record-breaking flood (locally called the “Cold Drop” (Gota Fría)) has swollen into a catastrophe to the southeast of Spain surpassing previous all-time records. By using a straightforward approach with the Sentinel-2 twin satellites from the Copernicus Programme and the ACOLITE atmospheric correction processor, an initial approximation of the delineated flooded zones, including agriculture and urban areas, was accomplished in quasi-real time. The robust and flexible approach requires no ancillary data for rapid implementation. A composite of pre- and post-flood images was obtained to identify change detection and mask water pixels. Sentinel-2 identifies not only impacts on land but also on water ecosystem and its services, providing information on water quality deterioration and concentration of suspended matter in highly sensitive environments. Subsequent water quality deterioration occurred in large portions of Mar Menor, the largest coastal lagoon in the Mediterranean. The present study demonstrates the potentials brought by the free and open-data policy of Sentinel-2, a valuable source of rapid synoptic spatio-temporal information at the local or regional scale to support scientists, managers, stakeholders, and society in general during and after the emergency.
Keywords:
Copernicus Programme; ACOLITE; flooding; quasi-real time monitoring; inundation mapping; suspended matter; Spain

The Sentinel-2 images as true colour composite Red–green–blue from the EO Browser [30] at 10 m spatial resolution show the before on 3 September 2019 (Figure 4a) and after on 13 September 2019 (Figure 4b) of the flooding event in Murcia province (Spain). The affected and non-affected zones were delineated, resulting in a flooded area of 1307 ha (Figure 5) over the Region of Interest on 13 September (ROI detailed in Figure 4b). This phenomenon has damaged the cultivated lands, mainly in Los Alcázares region (Figure 4b), where the exceptional rainfall caused widespread flooding and damage to agricultural lands, much of them farmed under agri-environment agreements. While flooding in winter is a common event in this region, flooding in late summer or early autumn (associated to the Gota Fría) is unusual and much more damaging. The information retrieved can be used to evaluate the impacts on flooded areas and help inform strategies to deal with changes in flood risk in areas of agricultural and environmental interest.
Moreover, Sentinel-2 identifies not only impacts on land but also on water ecosystem and its services. Due to the large quantity of sediments brought by the flood, the affected regions show an extreme increase of total suspended material and severe turbidity levels, visible in the RGB image (Figure 4b), leading to a contamination and deterioration of the rivers and the coastal adjacent region (Figure 2b). Large portions of Mar Menor (the largest coastal lagoon in the Mediterranean) showed up to 200 mg/m3 of suspended solids on 13 September (Figure 4d) compared to the standard situation ten days before on 3 September with minimum concentration <10 mg/m3 (Figure 4c). There were no in situ data to validate the TSM algorithm, but realistic information can be observed for the mapping of suspended matter using the TSM model [26] with the 704 nm band. A recent study has confirmed that Sentinel-2 red-edge bands achieved good accuracies when compared with suspended solid concentrations [31], in addition to the red or NIR bands [32,33]. One of the main advantages of Sentinel-2 over Landsat-8 is the inclusion of these three red-edge and NIR bands, allowing for the determination of chlorophyll in turbid and productive waters and the retrieval of turbidity or suspended particulate matter concentration, even in narrow inlets and ports, providing an invaluable dataset for several scientific and management purposes [34]. The TSM model was not able to perform accurately over the extremely turbid region close to the coast and part of the turbid intrusion was masked out by ACOLITE processor (similar results were found using other TSM algorithms within ACOLITE software).
In the Dolores region (Alicante), pre (19 August 2019, Figure 6) and post (18 September 2019, Figure 6b) Sentinel-2 false colour composite (near infrared–green–blue) from the EO Browser indicated the affected regions, with an estimated flooded area of 3150 ha on 18 Sep (Figure 7) within the ROI (rectangle in Figure 6b). This scene corresponds to some days following the event, thus some flood areas cloud not be well documented (scene 13 September over Alicante region has severe cloud contamination). The delineation of the flooded zones, including agriculture and urban areas impacted as well as identification of the affected infrastructures can be observed in the false colour image (Figure 6b). Water quality in reservoirs servicing human consumption and agriculture was also deteriorated as can be observed in the turbidity plume associated to the Segura River on 18 Sep with concentration of suspended solids up to 150 mg/m3 (Figure 6d) compared to the normal situation on 19 August 2019 with minimum concentration <10 mg/m3 (Figure 6c).

It is demonstrated that, in the event of a natural disaster, as the recent catastrophic flooding event occurred in Spain during the second week of September 2019, the Sentinel-2 fleet is a valuable rapid-response source of synoptic spatio-temporal information, and its benefit has been proven here. With their fine spatial and high temporal resolutions, these twin open-source satellites, particularly when coupled, have the potential to generate rapid information of the affected flooded parcels and of the water quality, data that is key for both the local government body as well as for the habitats to better assist policies plans and to deliver compensations based on it. This scheme can be established operationally for monitoring procedures bringing a considerable benefit to support managers, stakeholders and society during the emergency. On a longer term, the scientific rigor of the derived diagnoses can guide research and help to assist in objectively accounting losses and compensation needs as well as to design mitigation plans for future events. They can also provide a solid base of information to determine whether or not these events have a climatic component as well as to aid in the establishment of flood warning systems. It is an exciting avenue for future research how these services provided by science to society can be delivered with the Sentinel-2 mission, allowing new endeavours in high-resolution mapping and monitoring which will significantly increase the availability of crucial information after flooding events.

This research was funded by the Spanish Ministry of Science, Innovation and Universities (MCIU), the State Research Agency (AEI), and the European Regional Development Fund (ERDF) in the frame of the Sen2Coast Project “Improved assessment of algorithms for bathymetry and water quality parameters with Sentinel-2A/B high-resolution satellites for advancement of coastal applications” (RTI2018-098784-J-I00). 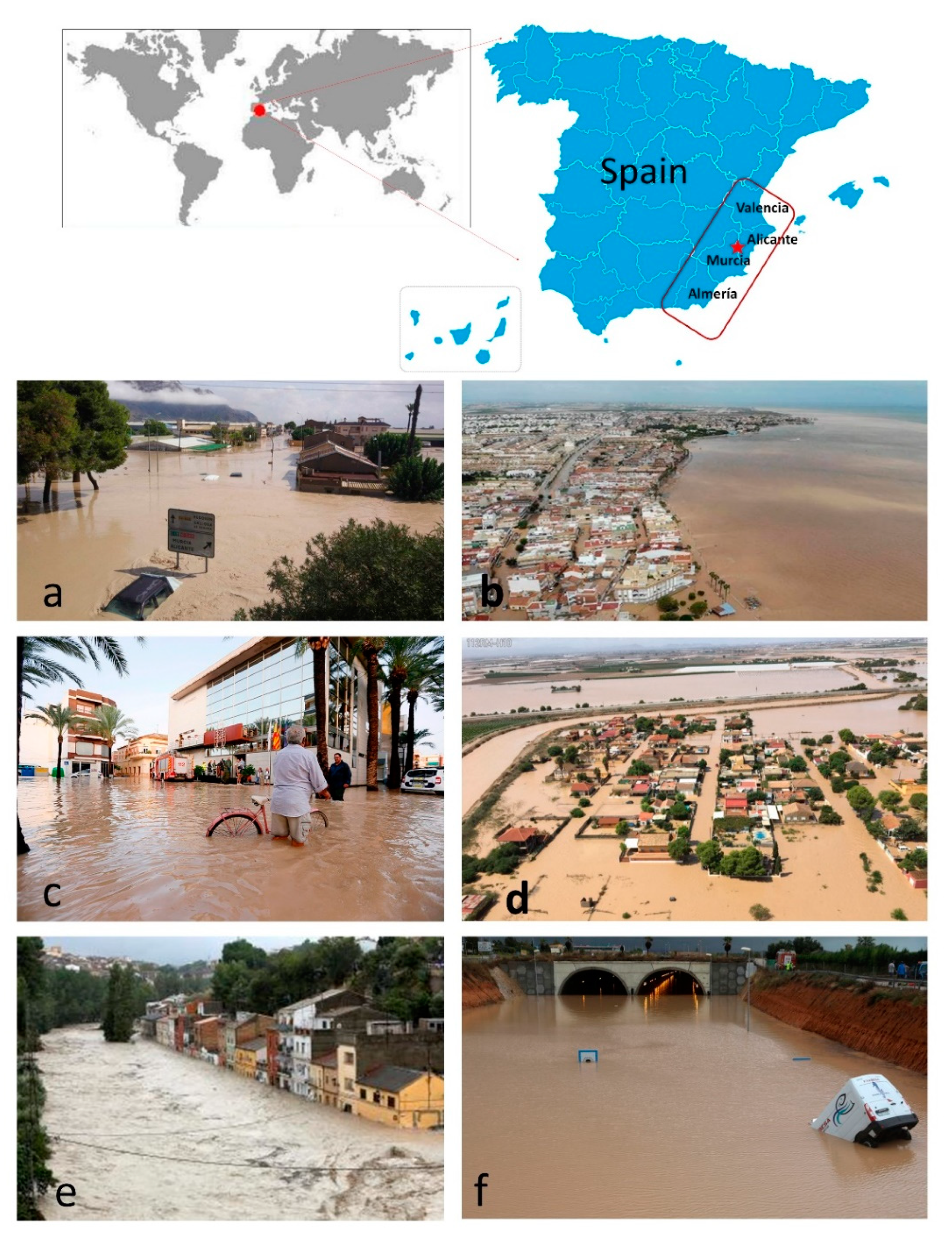 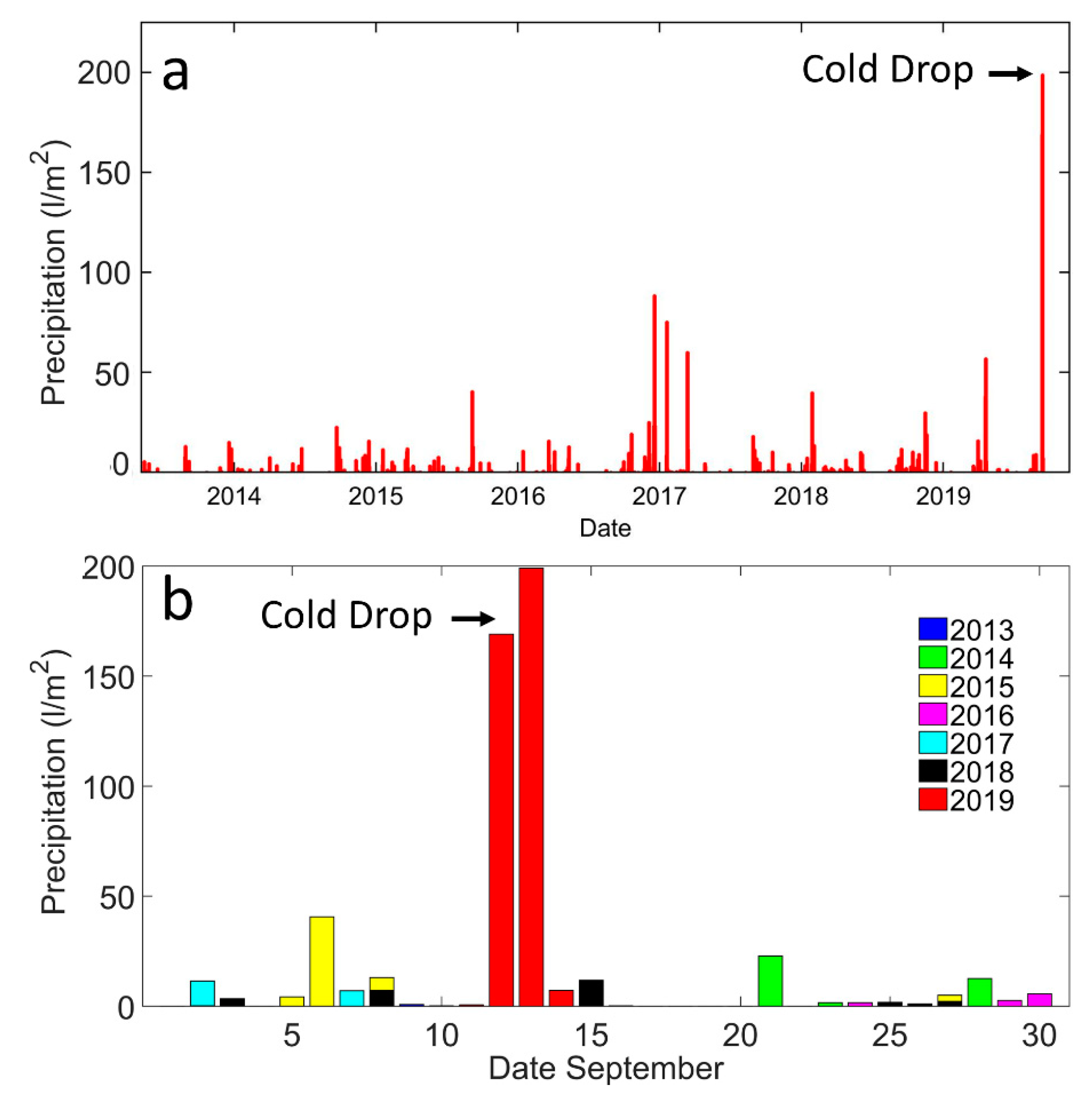 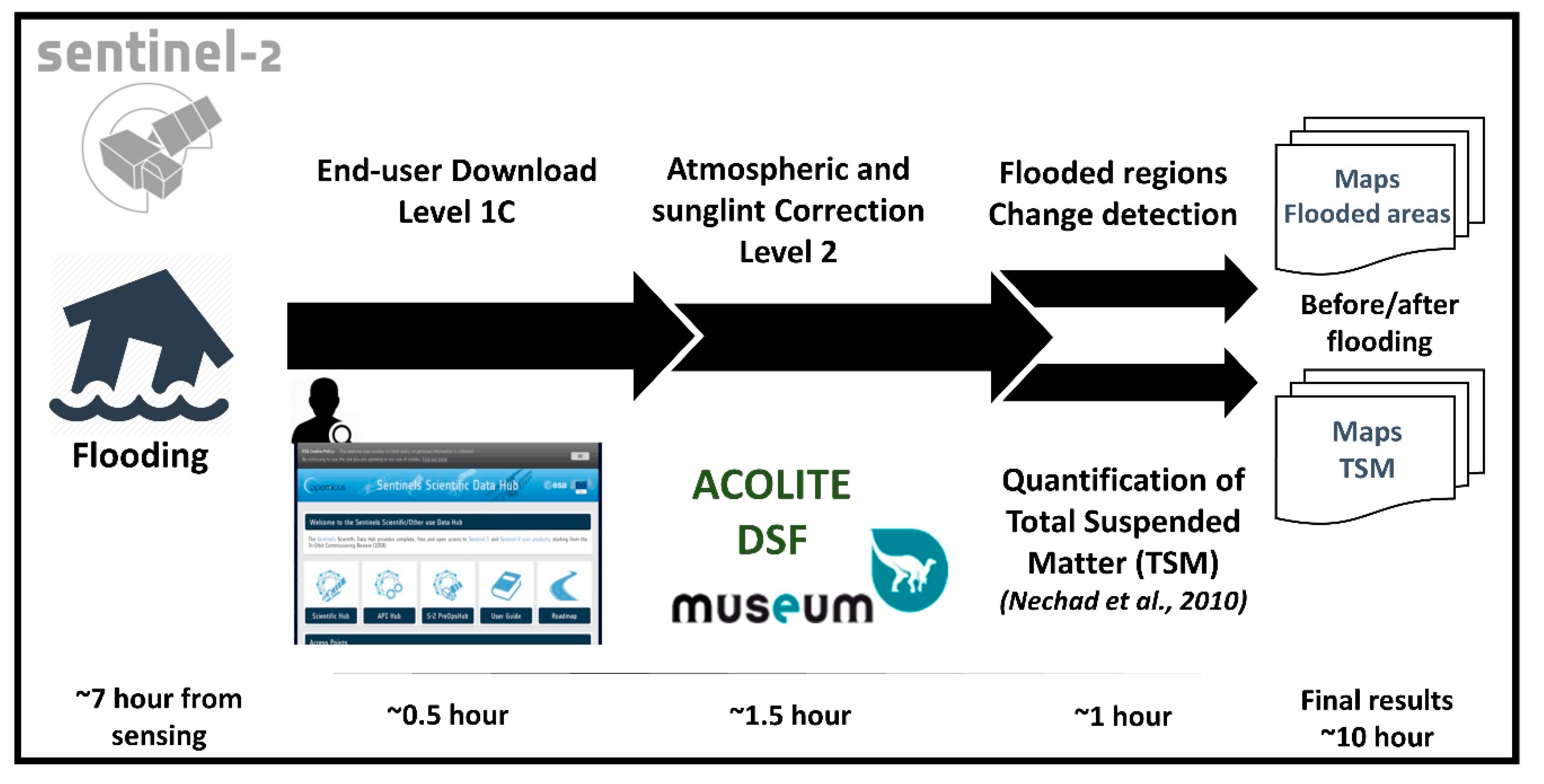 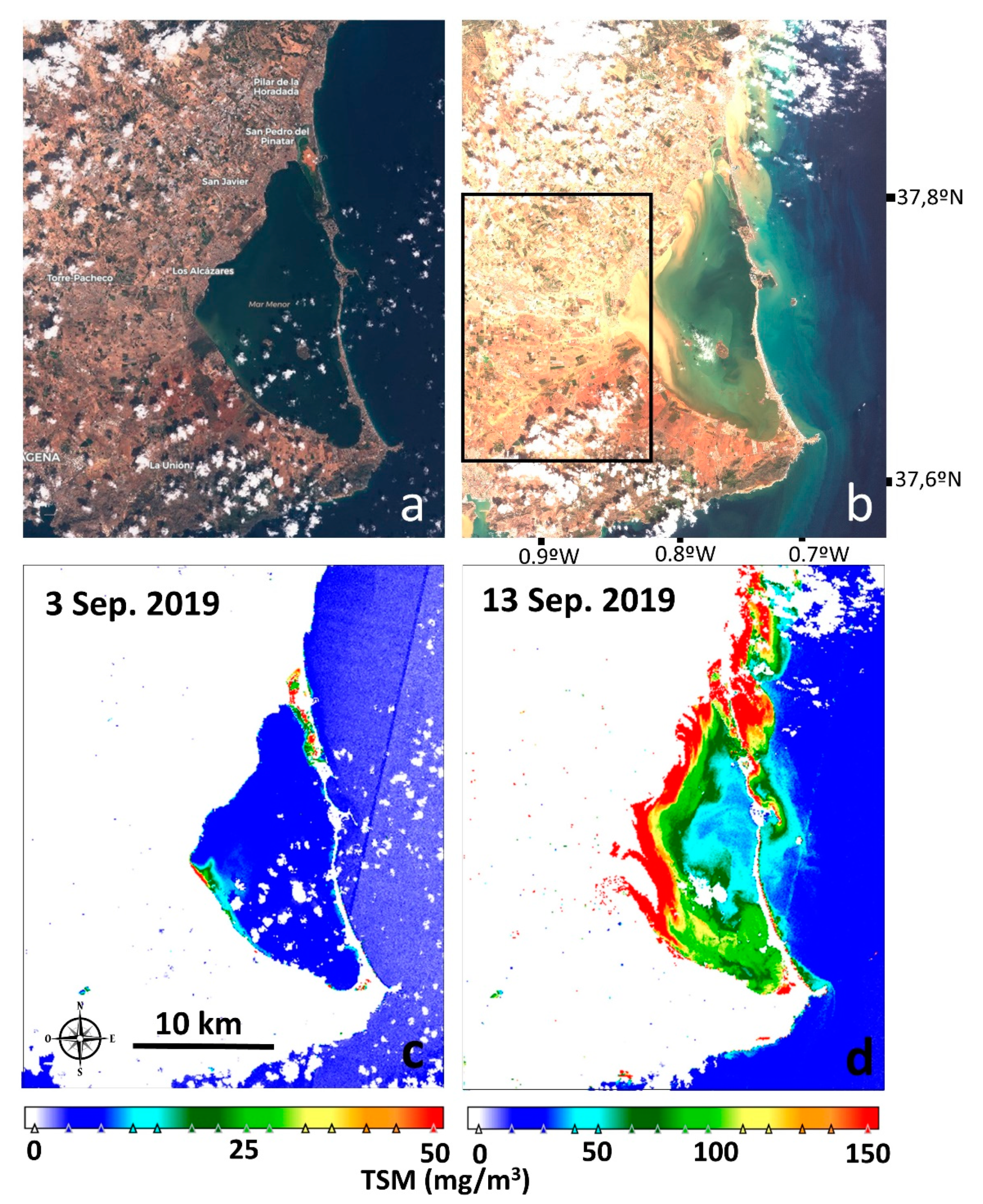 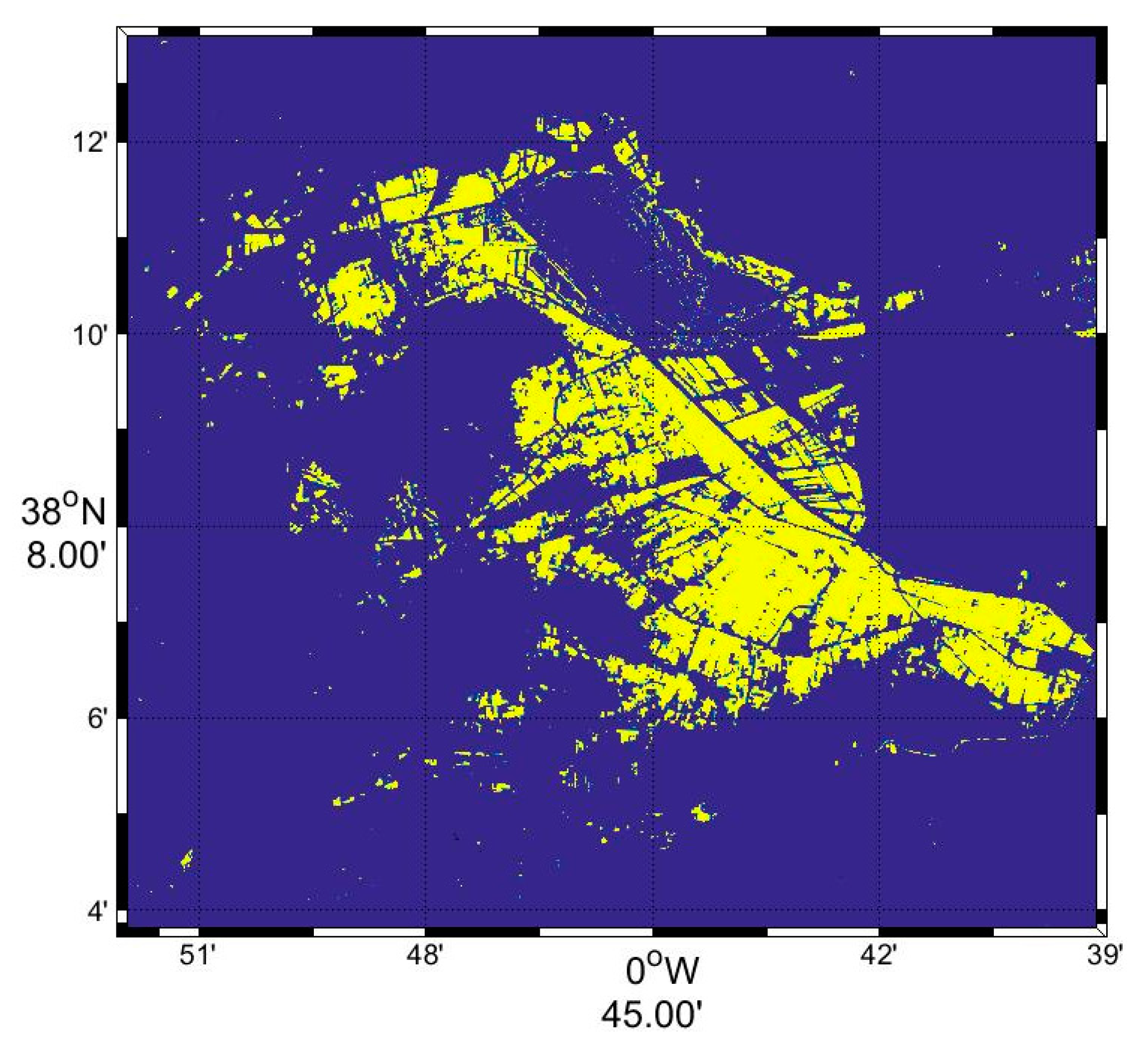