Characterization of Diffuse Groundwater Inflows into Streamwater (Part I: Spatial and Temporal Mapping Framework Based on Fiber Optic Distributed Temperature Sensing)
Next Article in Special Issue

Tailings ponds are the artificial hazard sources with high potential energy. In the event of an accident, the resulting tailings flow might bring huge losses to the life and property of downstream populations while also polluting the ecological environment severely [1,2,3]. Tailings are the kinds of solid wastes generated from mineral separation. Tailings are also a special kind of soil, generally structured with single granule and beehive. Due to the poor comprehensive utilization of tailings, the majority of them are stored in the tailings ponds aside from the cases of beneficiation, mine filling and building material recovery [4,5,6]. With the continuous exploration by mine companies as well as the growing demand for mineral products, the dam height and storage volume of tailings ponds have been gradually increasing [7]. Meanwhile, the risk of dam failure in the tailings ponds also heightens greatly in the face of extreme conditions such as earthquakes, rainstorms and failure of flood drainage systems. Cases of severe accidents caused by tailings ponds project failure are not uncommon [8,9,10,11]. For example, two dam burst accidents occurred in Minas Gerais, Brazil, in January 2019 and November 2015, leading to at least 232 deaths and 19 deaths, respectively [7,12]. In September 2010, a tin tailings pond in China’s Guangdonge collapsed, causing at least 18 deaths and direct economic losses of approximately 460 million yuan [13].
Evolution of tailings flow resulting from tailings pond leakage is a complex mechanical process, which involves multiple interdisciplinary fields including fluid mechanics, geological hazards and sediment transport mechanics [14,15,16]. So far, numerous scholars have estimated the flow characteristics of tailings pond dam failure such as total tailings leakage, dam breach width and maximum tailings flux through theoretical derivation, statistical analysis and other approaches and also formed relevant theoretical formulas [17,18,19,20,21]. With the rise of computer simulation software, plentiful fluid dynamics software has been applied to the evolution pattern research of tailings flow resulting from tailings pond leakage [22,23,24,25]. The fluid rheological equation embedded in FLO-2D, a US Federal Emergency Management Agency (FEMA)-approved flood and mudflow hazard simulation software [26,27], can be used for the simulation of the rheological state during evolution of leaked tailings flow.
This study explores the evolution of leaked tailings flow following dam failure and its effects on the downstream structures and personnel during evolution. Using the FLO-2D simulation software (FLO-2D Software Inc, Nutrioso, AZ, USA), the evolution process of tailings flow is studied under different downstream riverbed slopes and debris blocking dam construction parameters. At the same time, the evolution pattern, sedimentary characteristics and energy loss of tailings flow during evolution are analyzed. In addition, the effects of downstream riverbed slope and debris blocking dam construction parameters on the tailings flow characteristics are also investigated.

Digital Elevation Model (DEM) is created by collecting the digital elevation data within the scope of studied tailings pond combined with in situ investigation. The studied tailings pond dam has a crest elevation of 2005 m (the height above sea level), a fill dam height of 30 m, an initial dam height of 32 m, a total dam height of 62 m, a whole storage capacity of 3.996 million m3, and an effective storage capacity of 3.197 million m3, and it is located in Huili Country of Liangshan, Sichuan Province of China. The tailings pond adopts upstream damming, in which the height of each sub-dam is 5 m, the ratio of sub-dam to outer slope is 1:3.5, and the total slope ratio is 1:4.233. The objective of the sub-dams located upstream of the main dam is the deposition of tailings upstream of the sub-dams and, consequently, the increase of the storage capacity of the tailings ponds and the decrease of the streambed slope. Besides the storage capacity, maximum pond water level at overtopping, basic mechanical parameters of dam tailings and flow hydrograph range (Figure 1) of the tailings pond are determined based on the data collected in situ and the information provided by mining companies.
Dam failure computation models are built through in situ investigation at three downstream riverbed slopes, i.e., original terrain slope (average slope ratio of 4.2% along the valley bottom), elevation by 5% (average slope ratio of 9.2% along the valley bottom) and elevation by 10% (average slope ratio of 14.2% along the valley bottom), which can be found in Figure 2.

After vertical integration, the controlling equations can be reduced to a 2D format [28], which is described by the Navier-Stokes equations. The simplified controlling equations are shown below.
The continuity equation:
The equations of motion: where h denotes the draining tailing flow depth (m), I is the drop in the water surface per unit distance within the simulated range and is called the hydraulic gradient (%), u and v refer to the flow rate in the horizontal and vertical directions (m/s), respectively; and are the differences in the unit distance of the frictional resistance in the x and y directions, respectively, and are called the frictional slope (%), and are the differences in elevation within a unit distance in the x and y directions, respectively, and are called the riverbed slope (%).
When the flood or tailings flow is simulated by the FLO-2D, it can be performed in the dynamic wave mode or the diffused wave mode. According to the similarity criterion, Equation (1) is a mass conservation equation, while Equation (2) and Equation (3) are the momentum conservation equations.
Additionally, the evolution process of leaked tailings flow can be described by the rheological equation for high sediment concentration, which is proposed by O’Brien [29], as shown below. where Sf, Sy, Sv and Std represent frictional slope, yield slope, viscous slope and turbulence-distribution slope, respectively. denotes the yield stress of the fluid during the flow, denotes the fluid specific gravity, is the viscous coefficient of fluid, is the laminar flow resistance coefficient, and n refers to the Manning coefficient representing the roughness of ground surface.
Yield stress in the current study refers to the Bingham yield stress, which is reflected primarily as the internal stress pattern of viscous tailings flow and present in the form of viscous force [30,31,32]. The viscous force is a resistance produced by the interaction between shear and tensile stresses of fluid [33,34]. As a result, the Bingham viscosity coefficient and viscous force are closely correlated in the present work, and the increase in fluid volume concentration leads to exponential increases in the Bingham yield stress and Bingham viscosity coefficient [35,36].
The relationship between the yield stress and the volume concentration is shown in Equation (5). and the relational expression between the Bingham viscous coefficient and the volume concentration is presented in Equation (6). where volume concentration (CV) indicates the percentage of soil and debris like aggregate and gravel in the leaked tailings flow over the entire tailings flow volume. and are the empirical coefficients of the yield stress and viscous force, which can be derived experimentally. On this basis, Table 1 provides the relevant parameters used in the present numerical simulation.

In this study, different conditions of downstream riverbed slopes and debris blocking dam construction are analyzed for the tailings pond. The evolution characteristics and deposition laws of leaked tailings flow after dam failure are studied through simulation. During the evolution process, the overtopping flows carry the tailing particles towards the downstream, among the drag forces on the tailing particles, the friction is greater than the resistance, the tailing particles therefore migrate downstream rapidly. When the friction of the drag forces is equal to its resistance, the flow rate of tailing particles reaches a maximum. With the decrease in water content in the discharged sediments, the uplift force is gradually reduced, the resistance is increased, and the flow rate of tailing particles is decreased. The tailing particles gradually deposit until the flow rate reaches the isolation rate, and they finally deposit completely.
The results demonstrate larger inundated area of tailings flow on the upstream and downstream sections than the midstream, where there are drastic terrain changes. With the elevation of downstream riverbed slope, the inundated area increases, while the maximum depth of tailings deposition decreases gradually. In addition, the deepest sedimentation point of tailings is developed downstream, and the deposition thickness also decreases accordingly. The maximum evolution velocity increases with the elevating terrain, and the maximum impact forces are all located adjacent to the locations of maximum evolution velocity or maximum flow depth.
Setting up debris blocking dams at different distances (characteristic locations) downstream of the initial dam leads to a decline in the maximum inundated range of leaked tailings flow with the shortening distance of these dams from the initial dam. After blockage by the dams, the energy storage-dissipation-deposition process needs to be repeated again. Both the flow rate and depth decrease after crossing the debris blocking dams, and the downstream inundated area is accordingly reduced. Thus, the downstream inundated area ultimately decreases with the shortening distance between initial and debris blocking dams.

This research is supported by the Program for the National Key Research and Development Plan (2017YFC0804600), Open Research Fund of State Key Laboratory of Geomechanics and Geotechnical Engineering, Institute of Rock and Soil Mechanics, Chinese Academy of Sciences (Z018017), Changjiang Scholars and Innovative Research Team in University (IRT_17R112), National Natural Science Foundation of China (41602307; U1802243; 51904040), Open Issue with Key Laboratory of Mine Geological Hazards Mechanism and Control and Department of Natural Resources of Shaanxi Province (KF2018-09).

The authors would like to acknowledge the colleagues from the State Key Laboratory of Coal Mine Disaster Dynamics and Control for their perspectives and suggestions related to data collection and statistical analysis. 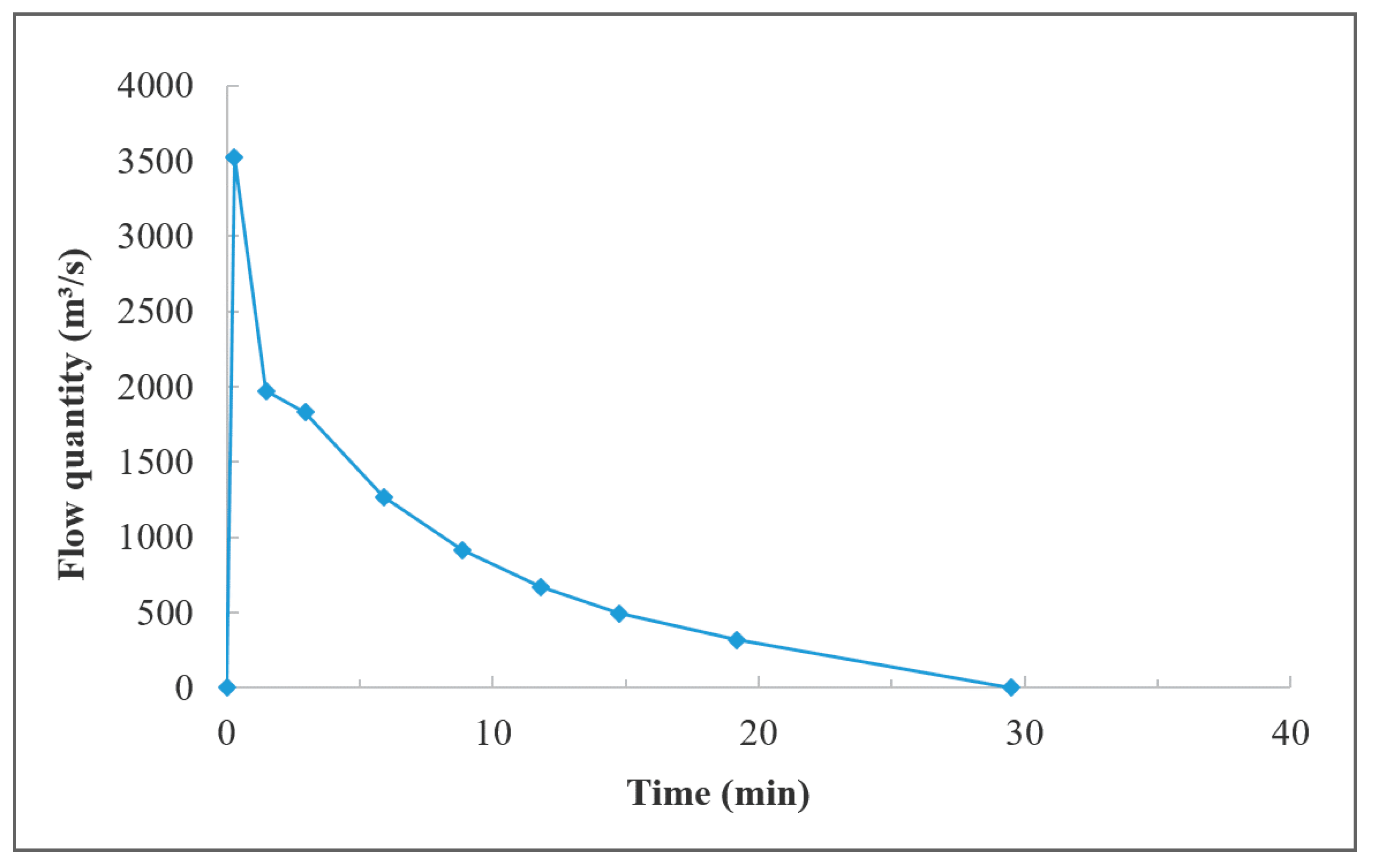 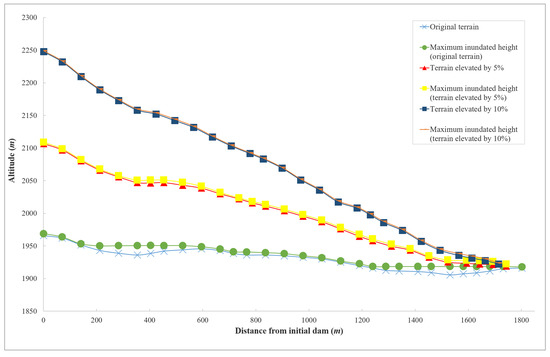 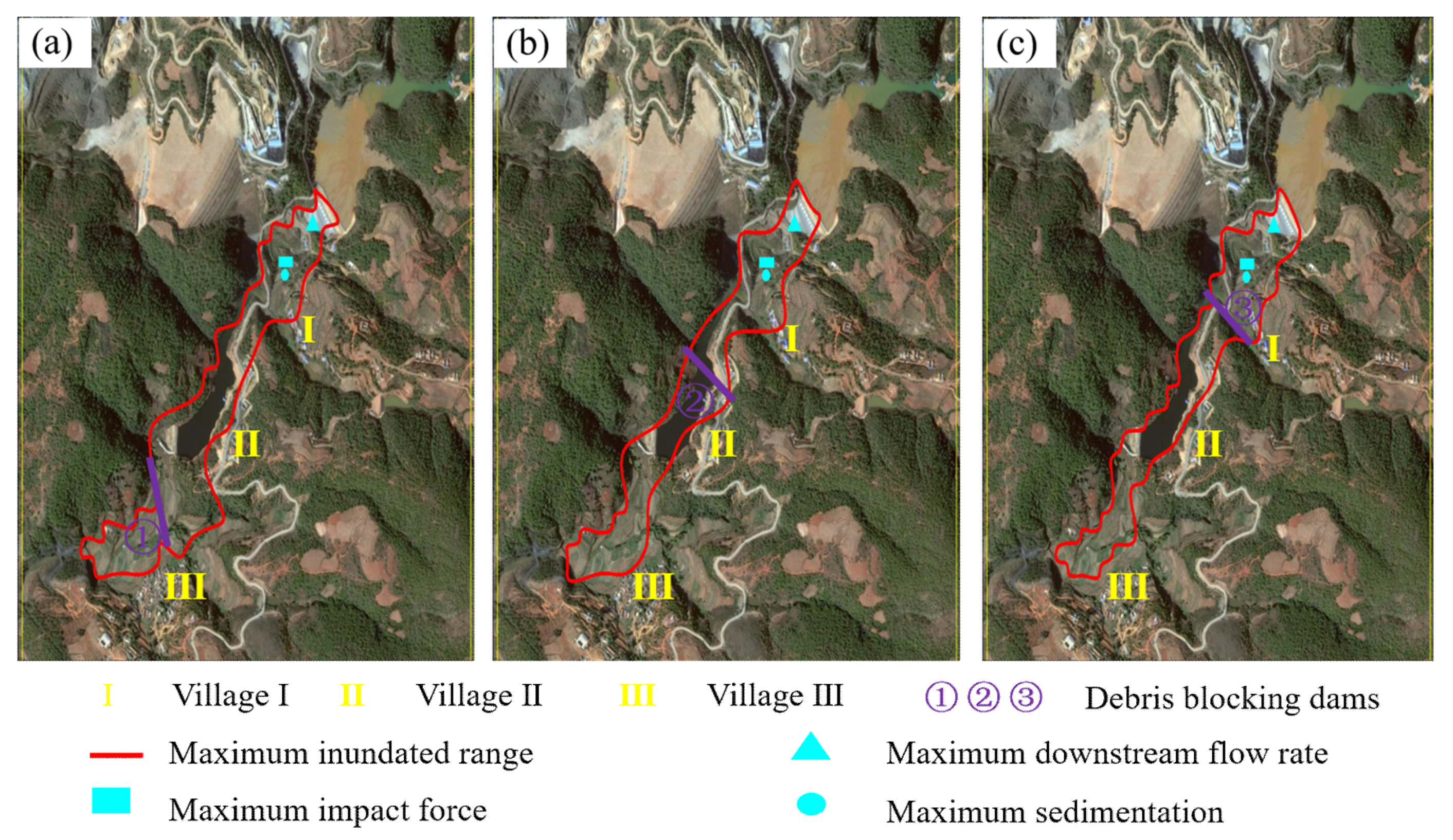 Table 1. The FLO-2D simulation parameters.
Table 1. The FLO-2D simulation parameters.
© 2019 by the authors. Licensee MDPI, Basel, Switzerland. This article is an open access article distributed under the terms and conditions of the Creative Commons Attribution (CC BY) license (http://creativecommons.org/licenses/by/4.0/).
We use cookies on our website to ensure you get the best experience. Read more about our cookies here.
Accept
We have just recently launched a new version of our website. Help us to further improve by taking part in this short 5 minute survey here. here.
Never show this again